Phones are ringing off the hook at Edgely Prep, a private Kindergarten academy in Manhattan that admits only a chosen few. Cristine (Christina Bianco) is tasked with handling all of the calls, having just been promoted from kindergarten assistant to admissions director. Her predecessor was fired after being involved in numerous illegal activities at the school and Cristine was thrust into the job. Under the oppressive supervision of her demanding boss and headmaster, Dr. Bradshaw, she must plan for an important gala, juggle inquiries from her colleagues in financial aid, coordinate plans with her best friend, and maintain her composure with pushy parents walking the precipice of berserkdom over their child’s admission application.

Welcome to Application Pending a scathing take down of the admissions process for New York City Schools. The amusing new comedy, written by Greg Edwards and Andy Sandberg, stars Christina Bianco, who single-handedly plays each character in this zippy one woman show. Bianco, whose prior credits include Forbidden Broadway and Newsical also became a YouTube sensation with her cabaret performance of “Let It Go” from Frozen. In each of these outlets she has transformed herself into a maven of mimicry. As Cristine, she morphs into each of her callers- from a passive-agressive Southern Belle who uses her persuasive charm to an angry PETA activist hell-bent on preventing Edgely from exploiting their live beaver mascot. She’s also Dr. Bradshaw, George Clooney, the Pope, police detectives, her California valley girl friend, her ex-husband, the school janitor, and countless other characters who keep Cristine’s desk phone ablaze. Bianco is a marvel to watch and never skips a beat.

The conceit of this one person roller-coaster is similar to Fully Committed, a one man entree  in which one reservationist takes calls at a swanky New York City restaurant, imitating the kitchen staff and various patrons desperately in search of a table. The show was a critical smash in 2000 and skewered fine dining in the same way that Application Pending grills the pampered and privileged of Gotham. Both require incredible acting skills and a captivating talent. Bianco more than fills the criteria and passes with flying colors.
Application Pending plays now through April 19th at the Westside Theatre, 407 W. 43rd Street between 9th and 10th avenue. For tickets and information, visit the box office or  For tickets and information, visit the box office or applicationpendingplay.com 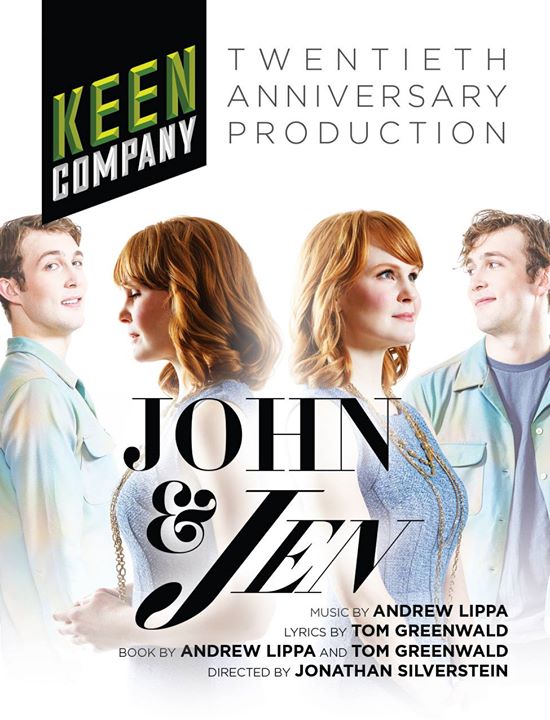 “Sometimes part of love is letting go,” sing John (Conor Ryan) and Jen (Kate Baldwin) towards the end of Andrew Lippa and Tom Greenwald’s musical John and Jen. The sentimental two person show is celebrating a 20th year anniversary production in Keen Company’s latest offering. In Act 1 (set in rural 1950s), older sister Jen welcomes her younger brother, John into the world and promises to “make sure he’s happy and safe.” As the pair grow older, the promise mostly endures. Jen does everything in her power to protect him from an abusive dad and other harms of the world. But as time passes, John forms an unhealthy idol-worshipping view of his father and finds his masculine identity through baseball and enlisting in the military. Meanwhile, older sister Jen escapes to New York, becoming a conscientious objector and falling for a groovy guy named Jason who does pottery, poetry, and LSD. Eventually, the sibling pact is strained. John is headed to Vietnam and Jen packs her bag to Canada. John views this as an act of cowardice but Jen is convinced in the power of love over war. Baldwin and Ryan provide excellent chemistry as brother and sister with a truthful and honestly written book by Lippa and Greenwald. Anyone who has ever had a sibling will recognize the duplicitous relationship between love and hate that such a dynamic can induce.
In Act 2, Jen is now divorced from her hippie husband and is the single mother of John, named for his Uncle. Here, Ryan portrays her son from infancy to adulthood. Jen can’t seem to cut the umbilical cord and smothers him at every turn because, as she points out, “My son has no one else to love him.” John’s good nature turns toward resentment towards his formerly free spirited mother. Like many maternal relationships, time is the soothing balm that heals and the complicated mother and son find themselves at a place of forgiveness and understanding before the curtain falls.
John and Jen covers much emotional territory in just under two hours. Still, it never glosses over any moment nor lingers on a particular scenario for too long. Lippa’s score is at times joyous and fun, yet tempered with beautifully somber and poignant ballads. Baldwin, who appeared in Lippa’s Big Fish and shines once again as a marvelous actor with an even more marvelous voice. Her boyish counter-part, Ryan, is a handsome, versatile performer whose range is quite impressive, especially given the fact that he is charged with fully developing two separate characters. Under Jonathan Slverstein’s smart direction, Lippa and Greenwald beautifully demonstrate the fragile, but essential need for family love and connection.