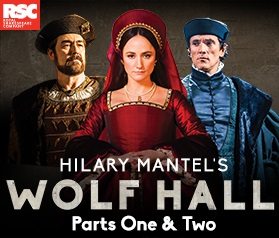 Picture this: It’s 1527. You’re Henry VIII. Your wife, Katherine is just not cutting it anymore. You’re bored and you want the “D” word. You also want your mistress, Anne Boleyn. So, you ask the Cardinal if he’ll divorce you and Katherine so you can live happily ever after with Boleyn.  He says (paraphrasing), “Are you barmy?!?! That totally goes against the doctrine of the Roman Catholic Church!” But you sally forth with your plans and enlist the help of your chief confidante, Thomas Cromwell. After all, Cromwell used to be the Cardinal’s secretary. He might have some leverage, right? Answer: Nope. Not really. (Sigh) Oh well!  Eventually, you decide that shaking up the court, the church, and your country is well worth the price of marrying someone who you will end up leaving for yet another woman. She’s not gonna be a dandy, either. Geesh Henry! You’re really  a rebel-rousing whore, aren’t you?

This is primarily the plot of Wolf Hall, the astonishing  two part drama currently playing at Broadway’s Winter Garden Theatre. The production comes to New York after a sold out, hugely successful run in London where it recently nabbed a couple of Olivier awards.  It is likely to garner several Tony nominations as well. If justice is served, it will not not walk home empty handed.

Mike Poulton has effectively adapted Hilary Mantel’s works of historical fiction into dual parts. Part One (Wolf Hall) lays the groundwork for all the political machinations that will ensue,  but Part Two (Bring Up the Bodies)  moves at an even swifter pace, drawing the audience into its  fold and keeping them on the edge of their seats. The entire saga clocks in at 5 hours (2 hrs. and 30 minutes for each part) and yet it never feels like a chore, thanks to the superb acting from The Royal Shakespeare Company. There is no finer acting ensemble treading the boards in New York City right now.

Christopher Oram has been charged with the task of conceiving both the set design and the costumes. On both counts, he succeeds with kingly admiration. A sparse, cold, gray  brick and cement interior strikes  remarkable polarity against his bedazzling ornate costumes.  Lighting designers Paule Constable (Part 1)  and David Plater (Part 2) also add a thrilling brilliance to an already flawless stage production.

I confess that  I am not a history fiend and knew very little about the trials and tribulations of King Henry VIII or his court, so it is with much admiration that I give to director Jeremy Herrin and his team of consummate professionals and producers  who have quenched the thirst of historians and simpletons like myself by presenting a captivating, accessible, surprisingly humorous, and hugely entertaining political tale that is worth selling your only child for seats. Weigh the options: You can always find another kid, but Wolf Hall will only be here until July.

Wolf Hall Parts One and Two. Now playing at Broadway’s Winter Garden Theater on Broadway between 50th and 51st. Tickets are available for both parts or can be purchased individually.  For more information, visit http://wolfhallbroadway.com/