It’s almost impossible to believe that stage veteran Victoria Clark is playing a grandmother in Lerner and Loewe’s  Broadway musical revival of Gigi. With her youthful face, boundless vivacity, and lovely demeanor, she carries an offstage flair of immortality. And yet, this Tony Award winning actress, who took home Broadway’s top prize for 2005’s Light in the Piazza has just been nominated again for her role as Mamita, the primary caretaker of young Gigi during Europe’s Belle Epoque.

Manhattan Digest  spoke with the self proclaimed “anti-diva” in a recent phone interview to discuss her latest project, her winning secret to staying in shape, the admiration she lavishes on fellow cast members, and her real life pending nuptials.

MD: Were you familiar with Gigi  before you took the role?

VC: Not really. I had not read anything by Colette and I’m embarrassed to say that I wasn’t familiar with her prose nor had I seen the movie, which was weird for a musical theater nerd. With so many plays and musicals now, they just offer me the role-which is great! Sometimes it’s actually harder to just get an offer to go into a show without going through the audition process. That process can be quite helpful for actors to prep and research, so the performance needs a lot more work one you start rehearsals when you’ve not had a build-up to it. I prepped by reading as many Colette novels as I could.

MD: Your role as Mamita is one who is quite protective of Gigi and pushes her towards true love, whereas Dee Hoty’s character, Aunt Alicia, is a gold digger who tries to persuade her into marrying for money.  Is there any commentary about Gigi making a personal choice and/or deciding upon female empowerment over wealth?

VC: There are many clues in the novella. You know,  I try not to watch other performances of the roles I am playing for source material because it’s too easy to steal or get intimidated. Then I realize I am  imitating the performance rather than making it my own so,  it takes longer to do that, but that’s the way I’ve always worked and it seems to be working for me. What I finally landed on is that Mamita is a larger than life character whose life is very vibrant, and it tends to eat up the energy in the room. When you have a child growing up in that environment, they don’t develop as quickly. If you look at Mamita’s purpose, it is to raise Gigi better than anyone could and also do a better job than she did the first time around with her own daughters. That is where the protectiveness comes from. A lot of my performance is based on the fact that I feel included in her life. As you get older, it’s really nice to not feel left out.  By having been raised in both worlds, she is able to make her own choice—which is better than something we adults could have ever  imagined for her.

MD: When I saw you in the show, I thought, “This is a typical Victoria Clark role!”

VC: (Laughs) I’m getting really known for these maternal roles. I’ve played a lot of bad guys and a lot of crazy people, but these types  are  fine with me. There are definitely worse things than being known as a compassionate maternal figure.

MD: What’s been the most rewarding part of this project from its inception at the Kennedy Center until now?

VC: Probably the most rewarding part for me has been working with this company. We all love how inter-generational it is. I get the biggest kick out of working with Cory (Cott)  and Vanessa (Hudgens)  and Howard (McGillin) . We really are like a family. We older folks are so tickled when the younger people come to us for advice because it’s nice to be consulted upon for certain things. I really look forward to seeing everybody every night. It’s a challenging part, but we realize that we are all in it together.  Plus I’ve had some fellow cast members tell me that they really enjoy watching my process, which has been nice. The property itself is a bit dated, but I think that Heidi Thomas (the book writer) did a great job of updating it and making it fun for modern audiences. The set almost looks like a big scrapbook. It is clear that it’s almost a rose-colored memory of that time. When I look back on the happy memories in my  life—this is what the show reminds me of, so when I perform, I think about the strong women in my family that have come before me who just loved life and  the majority of the show displays snapshots of turning points in a life. 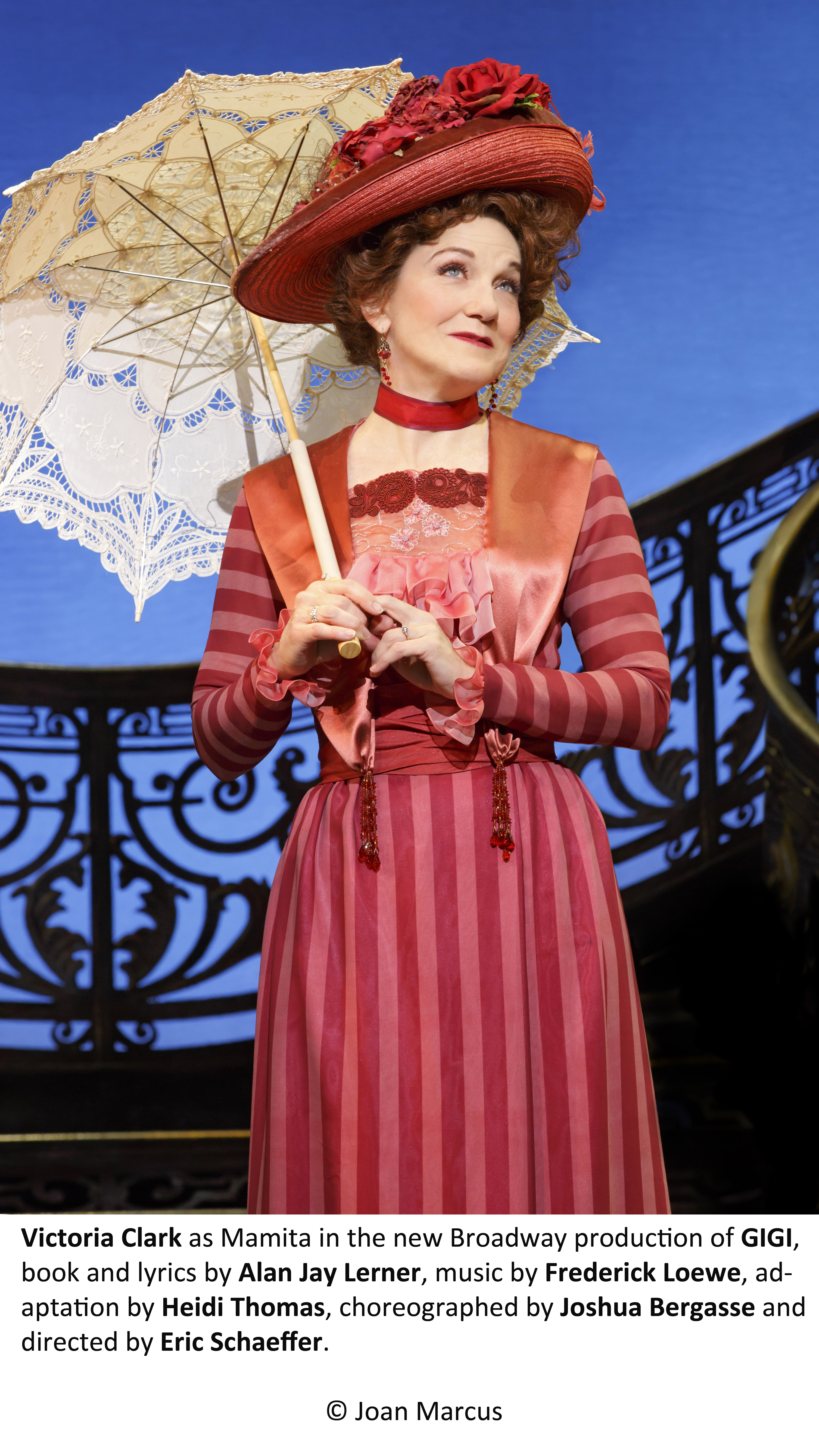 MD: How have you managed to keep your voice in great shape, especially with all the dips we’ve had with weather?

VC: That’s a great question. I rest a lot and I have a part of my voice that I warm up every day, which is the middle of my voice and that is my litmus test and when that gets tired then I have I list of precautions that I take. I start to sleep more and talk less and drink more water. I’ve learned the hard way through the years that I can’t push through like I did when I was younger. By the time my voice is tired, then I’ve missed the warning signs and it’s too late.

MD: Let’s talk more about the costumes. Are you wearing a corset in this show?

VC: I’ve had about a million different things I’ve worn to get into character. I’m one of those people who believes in period undergarments, but I have mild arthritis in my cervical spine, which I’ve had for years.  It causes  some limited mobility in some of my bones, so at this time, No. I’m not wearing a corset because the costumes are restrictive enough.

MD: Wow! Really? You look so thin in the show. When you first came onstage I thought, “Wow! She looks fabulous!”

MD: Congratulations on that! I remember the first time I saw you was in Titanic: The Musical, which was in 1997, so you have really maintained your girlish figure all these years.

The last time we spoke, you told me that you enjoyed cooking, and that your grandmother was a big influence.

VC: Well, I can’t cook any of the stuff she made. She would make biscuits and gravy and dumplings. Right now, I’m all about raw fruits and vegetables and lean protein with an occasional glass or wine. I love pies and cobblers and all of that stuff, but once I start, I can’t stop! Right now, with the demands of the show, I’m not doing much cooking. Plus, unless it’s chocolate, my fiance doesn’t eat that stuff either.

MD: Speaking of your fiancé, do you have wedding plans in place?

VC: Yes! We’re getting married this August. It will be a small family wedding down south, so there’s never a dull moment! I’ll be taking a vacation from the show for it.

MD: How long are you contracted for Gigi?

VC: For a year. The principal cast is here through March 2016. Did you enjoy Corey and Vanessa?

MD: Yes! I enjoyed them them both. Vanessa is just a burst of energy!

VC: Isn’t she?!? And she’s so sweet and such a good person. She is really diving in head first and I think she is doing a fantastic job. Corey is also giving a breakout performance. I think his moment to moment work and his  commitment is something you rarely see in young actors and he’s so dedicated. I think he’s going to be a huge superstar. I made that prediction after the first day of rehearsal. I had to restrain  myself from running up to him every day and saying, “You don’t even know what life has in store for you…you don’t even know!” (Laughs) And then I thought, “Ok. Just calm down. Let it unfold for him.” But he’s got a very bright future ahead of him. 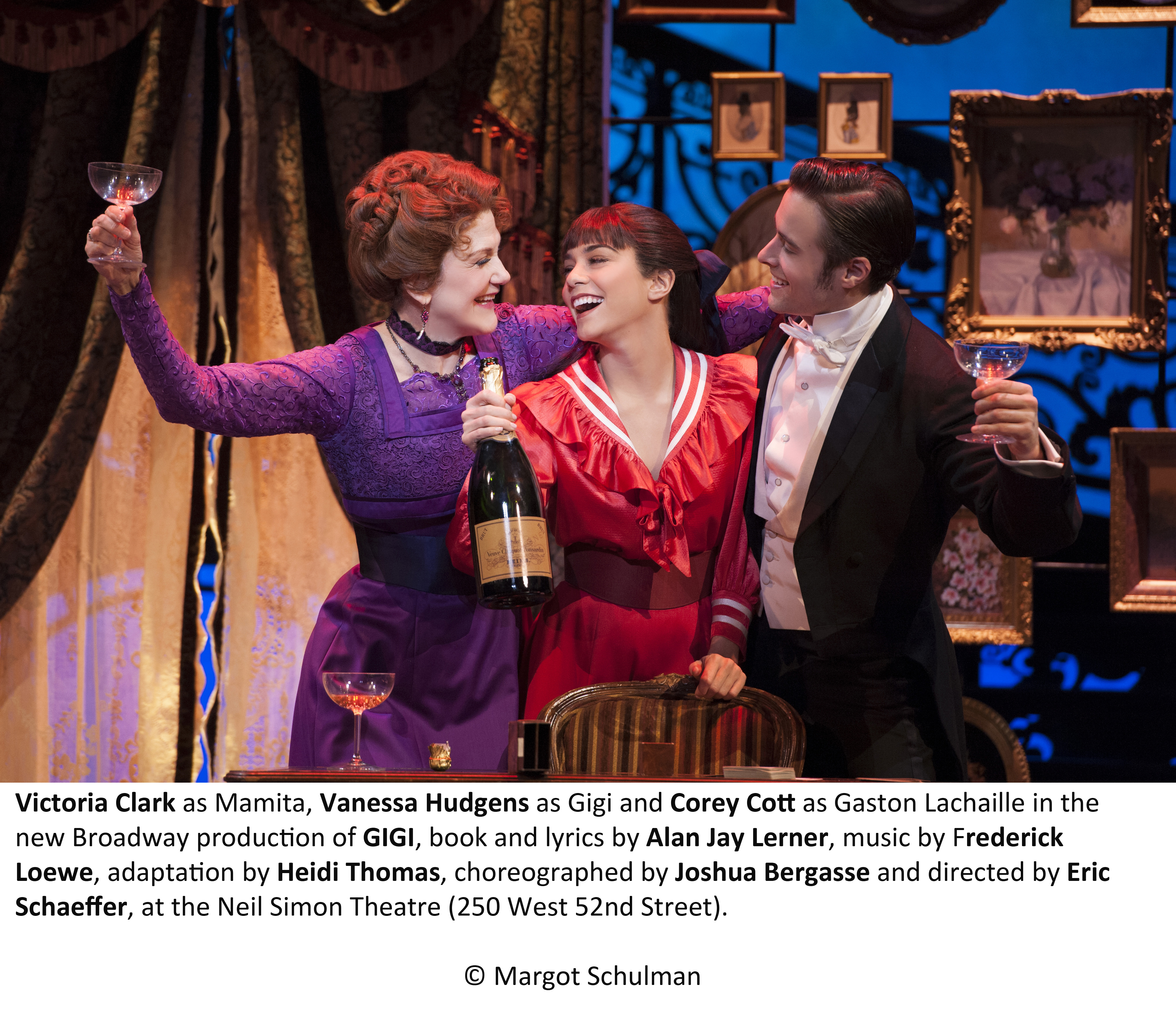 MD: Absolutely. Well, thank you so much for talking with me. I am so glad that everything is going well and that you’re in this show.

VC: Me too! It has been such a blessing and a I’ve been so lucky to have these amazing projects to work on.  I’m very humbled.

MD: Well, you have had quite a run of great hits and I’m sure you’ll continue to have more. We’ll see you in another 30 years in a revival of The Visit. You’ll be the new Chita Rivera for a new era!

VC: (Laughs) Yeah, maybe. We’ll see…hopefully! If I could do half as well as she’s doing now , that would be awesome!