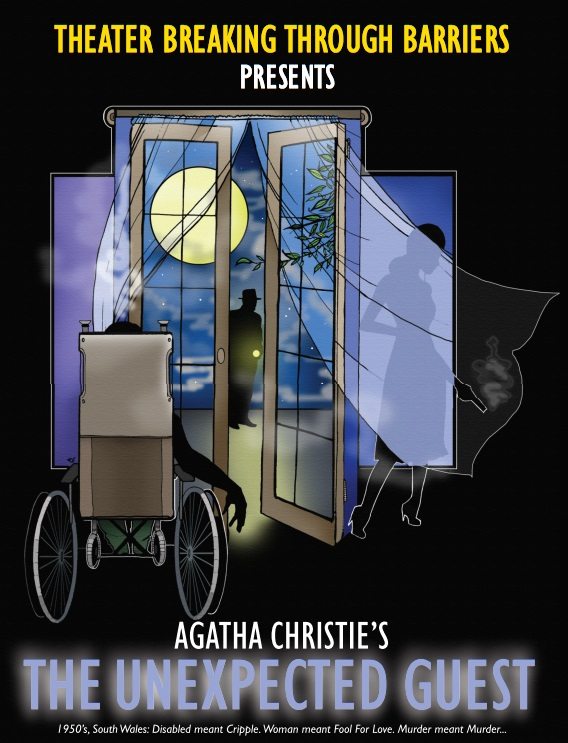 Richard Warwick is dead. His wife, Laura (Pamela Sabaugh) stands before him, gun in hand.  But is she the murderer? Herein lies the major question in Theater Breaking Through Barrier’s current revamp of Agatha Christie’s The Unexpected Guest.  For the next two hours and thirty minutes, members of Warwick’s house are questioned, suspected, and motivated to find the true killer.

Originally premiering in 1958, the play is a rather lumbering piece of theater. As it is with most stage adaptations of Christie’s work, there is seemingly infinite exposition in an attempt to strip away the evidence of clues.  Fortunately, this  talented cast makes the most of the material by keeping the pace of what could be an unendurable exercise light and breezy.  Nicholas Viselli shines in the title role as a gentleman who stumbles upon the corpse after a roadside car breakdown. Sabaugh strikes effective chemistry with her co-star and the two handle the overly loquacious script, balancing it with the right amount of levity and intrigue. The remaining ensemble complements their leading players, each having their “moments” of shared secrets and in some cases, interrogation.

Christie spent a great deal of time crafting the plot, but the primary riddle audiences will be left asking themselves is, “Why does any of this matter?” All of her characters point to the fact that Warwick was a demanding, abusive alcoholic whose demise is almost celebratory.  Perhaps these proclamations add to the mystery?

While The Unexpected Guest might not be one the most enigmatic shows you’re likely to see, high credit should be paid to this fine acting troupe and it will be a delight to watch their quality continue in upcoming works.

The Unexpected Guest is now playing through May 10th at Theater Row (W. 42nd between 9th and 10th) For tickets and information, visit the box office or http://www.tbtb.org/