You are here: Home / ENTERTAINMENT / ARTS / Theater Review: IT SHOULDA BEEN YOU 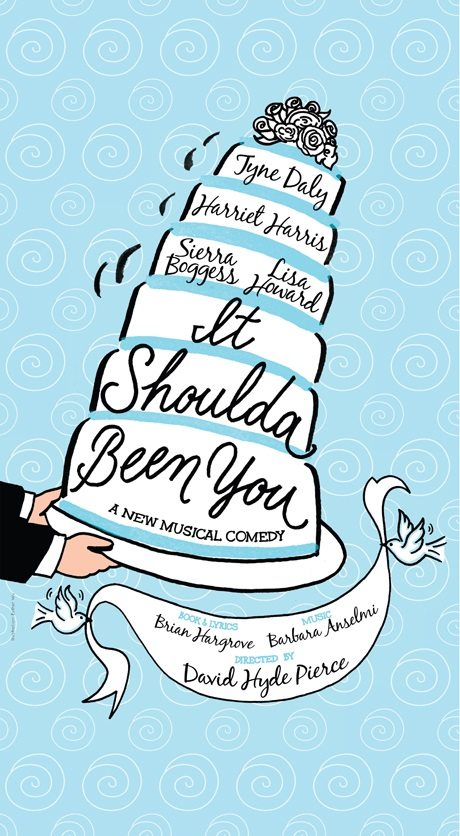 “Cute” might be enough to cut a wedding cake, but it’s not enough to cut the pain of dropping your hard-earned dollars on Broadway’s latest musical romantic comedy, It Shoulda Been You. That’s the bad news. The good news is that this harmless confection will likely grow legs and be reproduced in regional theaters across the country.

Set in a swanky hotel on the day of a mixed marriage wedding, the show pits two sets of  parents against one another: Judy and Murray Steinberg (Tyne Daly and Chip Zien), devout Jews whose daughter, Rebecca (Sierra Boggess) is tying the knot. In the other corner is George and Georgette Howard (Michael X. Martin and Harriet Harris), an uptight Protestant pair. Their son, Brian (David Burtka), is  poised to take Rebecca’s hand, but not if his bride-to-be’s old flame, Marty Kaufman (Josh Grisetti) has anything to say about it. Albert (Edward Hibbert), the “so gay he nearly flies away” wedding planner, Annie (Montego Glover) , Rebecca’s “friend” and Greg (Nick Spangler), Brian’s “friend” round out the line-up of main players, except for Jenny Steinberg (Lisa Howard), Rebecca’s sister and chief organizer.

In spite of all its’ dippy humor by book writer and lyricist Brian Hargrove, Howard is the knockout star of this union, effortlessly taking shoddy material and weaving it into a bold and beautiful fur coat. As she puts on a good face and vies for the approval of those around her, Howard’s Jenny  embodies warmth, sincerity, and a showstopping storm of sass near the finale in “Jenny’s Blues.”

The idea of It Shoulda Been You is clever: take an old-fashioned wedding comedy and put a modern spin on it, but the cake rarely rises. Sure, there are some gut-busting moments. Greg and Annie’s “American Idol”-esque love song, “Love You Till the Day” is comedic nirvana. (Watch the reactions of those seated behind them for additional guffaws).  Aside from these two numbers, Barbara Anselmi’s music is far from memorable.

The show is chock full of rich talent, from an always solid Tyne Daly to newcomer Josh Grissetti, whose nebbishness and irresistible charm furnish the show with winning endearment. Celebrity director David Hyde Pierce is no stranger to well crafted theater, but even under his hand, the ingredients create a batter of general disappointment.

Allow me a cheeky moment to paraphrase the wedding vows: Do you, New York ticket buyer, take It Shoulda Been You  to be your musical comedy partner for 90 minutes, mostly in sickness but with a slight smattering of healthy humor? Will you love it and cherish it until it starts and only then  realize that there are better options on the boards? If so, please answer, “I do”. Just know that next year this time, you’ll be able to see it in summer-stock at a fraction of the cost.

It Shoulda Been You is now playing on Broadway at the Brooks Atkinson Theatre, 256 West 47th Street between Broadway and 8th avenue. For tickets and information, visit the box office or go to: http://www.itshouldabeenyou.com/