Judith Clurman has every reason to “whistle a happy tune.” After selling out Carnegie Hall twice last fall with her New York based choral group, Essential Voices USA, the busy conductor got to work on her latest project, a night of Rodgers and Hammerstein’s music. On Friday night, June 26th at 7:30 pm, Clurman will be at the Mozarteum in Salzburg, Austria, where she’ll conduct a collection of songs from the legendary writing team. With the Music Celebration chorus and soloists from the Metropolitan and Gotham Opera, the group will perform songs  from Oklahoma, Carousel, The King and I, and South Pacific.

Clurman is ecstatic about the concert, but she is most excited about the world premiere of “The Sound of Music Suite.” Commissioned by Music Celebrations, arranged by David Chase, and  orchestrated by Tony Award winner Larry Hochman,  the piece will include many of the songs from the most successful movie in history. This year, the film celebrates its 50th anniversary. “It has been a great honor to work with the staff of Music Celebrations to organize this monumental tribute to the milestone year of the movie version of The Sound of Music, especially in the wonderfully musical city of Salzburg,” said Clurman, “I am certain that the creativity of this music will dazzle the audience as much as it did fifty years.”

The world-renowned virtuoso, along with Broadway veteran Chase, adapted a recently discovered Trude Rittmann choral arrangment of “Getting To Know You,” from The King and I, which will also be  part of the evening’s program. Rittmann was the original choral and dance arranger for many of Rodgers and Hammerstein’s works.

After Europe, Clurman will return to her native City where she’ll continue her long time collaboration with the New York Pops. Essential Voices USA will once again perform with the orchestra at Carnegie Hall for  their 2015-2016 season. On Friday, October 9th, her group will share the stage with Broadway stars Sierra Boggess (the recently announced star of Andrew Lloyd Webber’s upcoming The School of Rock) and Steven Pasquale, the camera wielding heartthrob of Jason Robert Brown’s musical  The Bridges of Madison County. Echoing the theme of her Austrian concert, Clurman’s group will continue to honor the music of Rodgers and Hammerstein for the night’s program

Clurman promotes a collaborative and community feel among her group and encourages any singers looking for unique performance opportunities to audition. Those interested should e-mail: [email protected] Auditions will be held on August 23rd, 2015.

For additional information about auditions and upcoming events, check the image in this article or visit: http://www.essentialvoicesusa.com/ 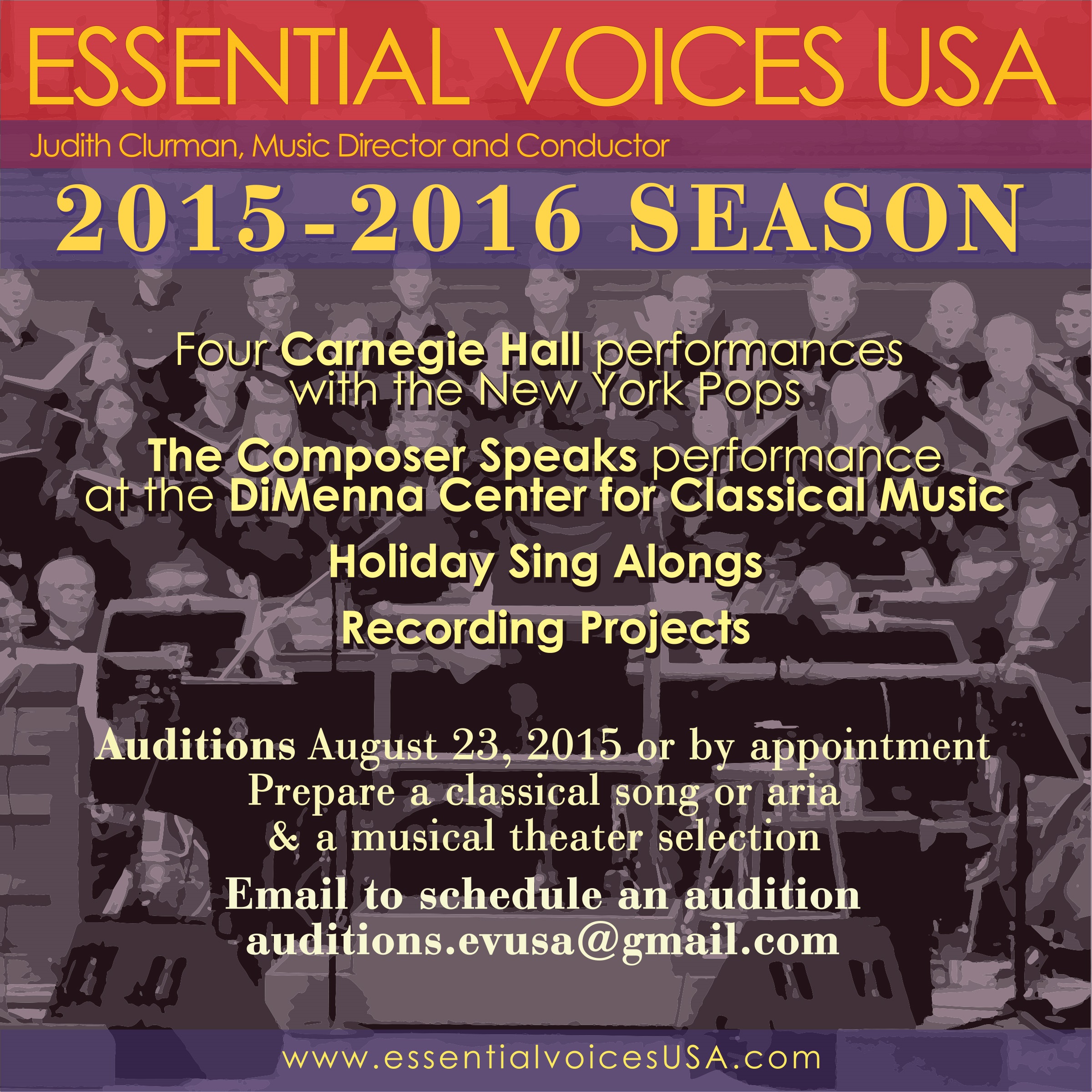