You are here: Home / BUSINESS / Hospitable Gents: An Interview with Jim Burba and Bob Hayes

Jim Burba and Bob Hayes might not have the same name recognition as Ellen Degeneres, Elton John, Tom Ford, or Neil Patrick Harris, but they share a common thread: They have all been listed as one of 20 “Power Couples to Know” by Out Magazine’s print and online platforms. 2015 marks the third year that Burba and Hayes have made the list and while neither of them are hosting a daytime talk show, singing good-bye to the yellow brick road, designing handbags, or being referred to as “Doogie Howser”, the pair have earned the honor by making a profound and indelible mark in their industry and within their local community.

As co-founders of the Burba Hayes Network (BHN) in Orange County California, the business couple, who wed in 2014 after 24 years of courtship, develop and produce “must attend” global conferences for the hotel and tourism industry. Here, C-level hotel investment executives can gather to network and learn about the latest industry trends.

Since its inception 15 years ago, they have demonstrated their unwavering philosophy of giving back through their events  with over $14,000,000 of contributions for scholarships, research, and program development for the hotel industry.

The indefatigable duo have broadened their scope past hotels, however, Currently, they are hard at work on their first publishing deal, producing another Hollywood film, and co-producing an Off-Broadway show that plans to splash onto Broadway early next year.

Manhattan Digest recently spoke with them to discuss their nearly finished book, the qualities of leadership, sexuality in the corporate world, and why time and participation can be more valuable to charity than money.

MD: Tell me a bit about the book you’re writing.

Bob: The book is called “Smart Partners” and it will talk about lessons we have learned in our long term business partnership as well as in our life partnership. We’ve discovered principles that guide us in both journeys. It also incorporates ideas and thoughts from colleagues of ours and other “celebrity couples” who have taken a similar journey. We’ve tried to weave their stories into ours.

Jim: It’s not a “how to” business book, but rather what we’ve done, how we did it, and what we’ve learned. The more we started talking to other business partners, the more we found out that they are the lessons nearly everyone in business has learned.

MD: Did either of you have positions of leadership before starting BHN?

Jim: I was a partner in an attorney firm and an executive in businesses along the way. I also ran my own consulting firm.

Bob: I was a random employee I guess you could say. I was a management analyst in city government. I sold real estate.I did design. Really I was just trying to find the place where I’d be the most productive and then Jim dragged me into his world– and it worked!(laughs). It’s been working for 15 years now.

MD: You really built the company from the ground up then, right?

Jim: Yes. It started with the two of us and we barely made payroll. The first year was tenuous, but we made it.

Bob: We began in 2000 and the first big event that we held was in January 2002, months after September 11th.   That first program launched but it was put together at a difficult time because most people weren’t even thinking of traveling or investing.

MD: Well, you’ve obviously done very well since then. What are the key qualities you look for both in yourselves and in your employees?

Bob: The desire and willingness to “go all in” is very important-meaning that you commit to what you are doing. I think that is one of the reasons we’ve been so successful.

Jim: In our own way, we are perfectionists. The product we produce is better and I don’t say that lightly. We works really hard on the quality of our programs and we  believe that we have a corporate social responsibility.

Bob: Integrity is also a big thing. We’re known as people who have integrity and we do everything we can to preserve that. We don’t  place ourselves in  situations where that integrity is compromised. We go about our business transparently so  everyone knows what they’re going to get and everyone gets the same things. We like to say that we’re like Switzerland. We don’t take sides and we don’t prefer one over the other. It creates a level of trust that is very important. Once you give your integrity away, you de-value what you have and it’s hard to get that value back. When you start cutting corners, the value of your business model goes down.

Jim:  We will walk away from money if it comes with strings attached and we can’t offer those strings to everybody. In that way, we’re very democratic.

MD: Your prevalent theme is “giving back.” How do you think small businesses or individuals who aren’t as financially equipped can give back in a philanthropic or charitable sense?

Bob: It’s not just about money. It’s about getting involved. They need participation and promotion and people who care about the mission and their community. That is even a better way

Jim: We support  http://www.youthcareerinitiative.org/ which was started by Prince Charles. They go into impoverished neighborhoods and find kinds who have little luck of getting out of poverty. They take them to hotels that will take them in for a 6 month internship  and teach them life skills. 90 plus percent end up with jobs after 6 months. We do more than give them money, though. We are “mouthy” and we talk about it, so it’s a matter of using our platform we to give these kids something that they never had. That is something that is greater than just writing checks. 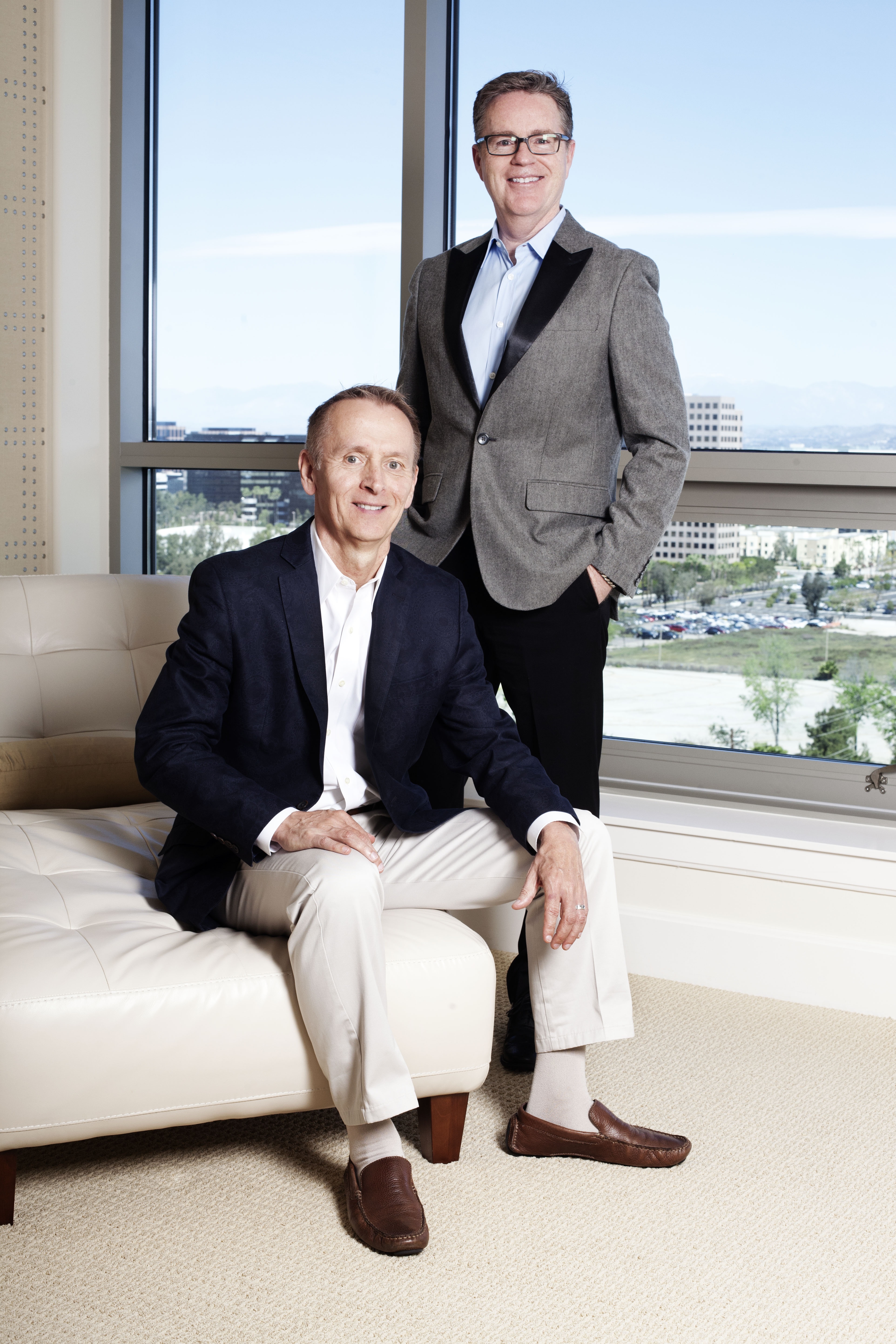 MD: Have you ever faced discrimination in a workplace because of your sexuality?

Bob: We never made our sexual orientation an issue. We’re kind of “matter of fact” about it, but we don’t shove it in people’s faces. Maybe people respect that because we aren’t forcing anyone to make a moral decision based on their beliefs. We’re just here and we are who we are.  We also have a sense of freedom in having our own business too.

MD: A big deal was made when Apple CEO Tim Cook came out because that was a great stride for the corporate world. There still are not alot of openly gay CEOs. Why do you think there is not more openness at that level?

Jim: I think as time goes on, you’ll see more CEOs step up and step out.

MD: Do you consider yourselves LGBT advocates, activists, spokespeople, all or none of the above?

Bob: I don’t think we’re spokespeople, but we are advocates. We won’t stand on the cormer and wave flags and banners. But people have come up to us and thanked us, though, for talking about it and for being visible. They thank us for speaking out just by example.

MD: Let’s switch gears to Seth Rudestky and Jack Plotnick’s Disaster! The Musical. That was a huge hit Off Broadway and as co-producers, you’re bringing it to Broadway. What is the status of that project?

Bob: We’re still on track. Talks are going well and we’re looking at early 2016. We just need to determine the theater. We have to find one that fits the show, the timing, and the talent schedule, so it’s a bit of a puzzle piece.

MD: You’ve mentioned in the past that you both have a full plate but always leave room for a few bites. What “bites” are you working on now?

Bob: Well, we have another film project coming up and have just signed a pretty well known actor to the deal. (At the time of writing, the actor couldn’t be revealed). That will start shooting this October. Just two days ago, we met with a production company for a TV show based on a concept we developed a few years ago, so that is in the works.

MD: Do you ever feel as though you bite off more than you can chew?

Bob: (Laughs) Yes! Sometimes we look at one another and shake our heads asking, “What did we just do!” But, we’re having the time of our lives and we’re not ready to slow down. If we think a project is valuable, we do it. It seems like the more we have to do, the more we can do. And we have a great team here at the office. We couldn’t do what we do without them.

To keep up with Jim and Bob’s latest endeavors and events, visit their website: http://www.burbahayes.com/