You are here: Home / uncategorized / Theater Review: FOOL FOR LOVE

As I sat through Broadway’s latest revival of Sam Shepard’s Fool for Love, one thing came to mind: Pop Tarts. I’m sure that’s probably not what Shepard, nor director Daniel Aukin, nor leading players Nina Arianda and Sam Rockwell had in mind when they collaborated on this 90 minute drama of tense romance. In fact, I’m sure the last thing Shepard thought was that some bozo New York theater critic would minimize his Midwest opus to a paltry, mass produced, pastry from the Kellogg’s factory. But please hear me out. 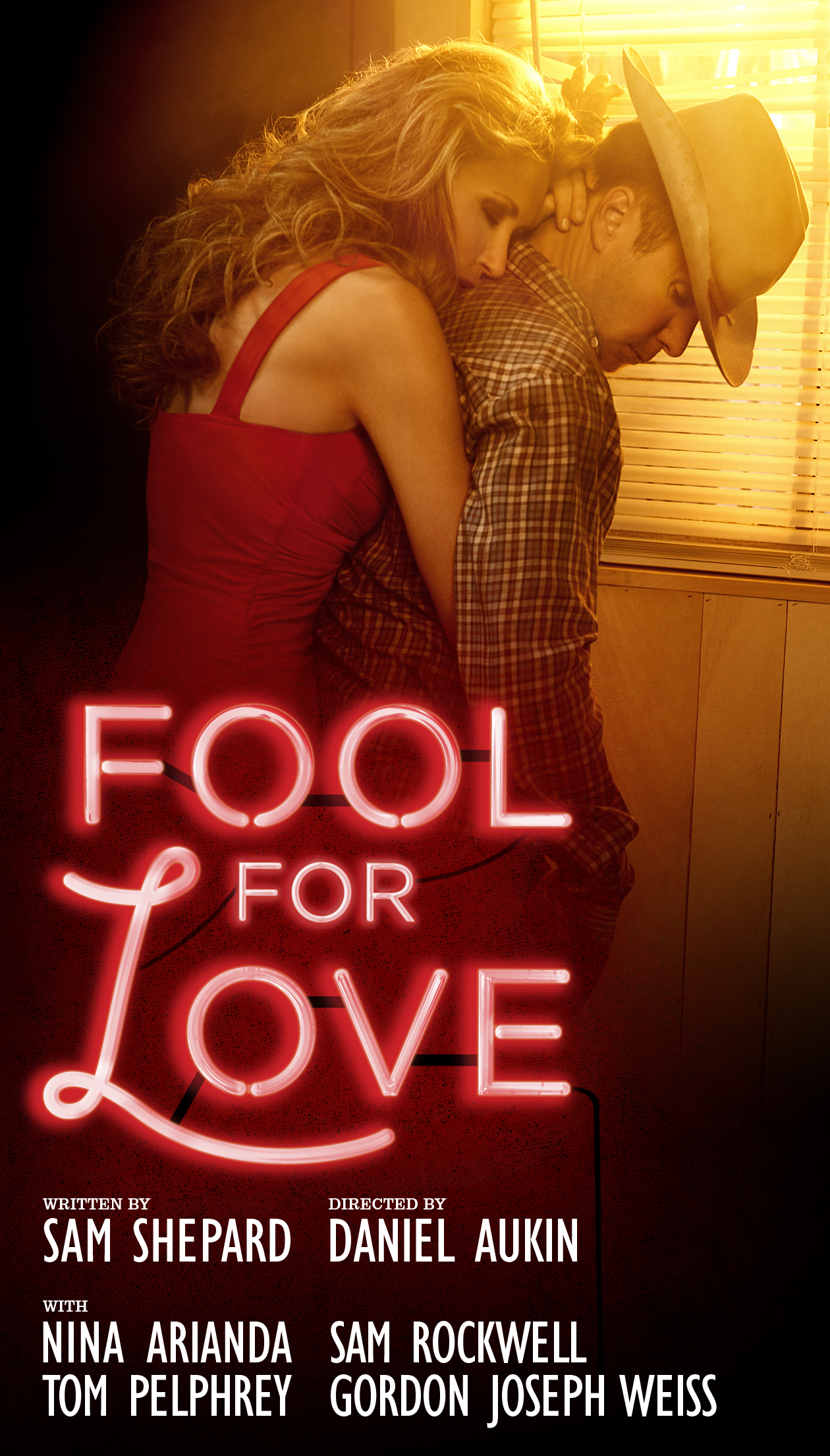 Shepard’s play was inspired by his own life circumstances of breaking up with his wife, actress and playwright O-Lan Jones. He has expressed his own mixed feelings about it stating, “Part of me looks at Fool for Love and says this is great, and part of me says this is really corny.” By now, the successful playwright should possess a mental swagger of confidence in his well-written, greatly received tale.

All of the action in 1983’s Fool for Love occurs in a run-down hotel room in the middle of the Mojave Desert between two wayward souls: Eddie (Sam Rockwell) and May (Nina Arianda). Eddie is a rambunctious cowboy wrangler with a yen for booze and an eye for females. May has hunkered down in the ramshackle room, mostly to escape the torment from off-again, on-again lover, Eddie. It’s also a chance for her to clear her mind from the disassembly of her own life and to find solace in a new man, Martin (Tom Pelphrey) .  Still, Eddie can’t leave her and as much as she tries to distance herself from the bad news beau, May can’t resist him. She neither wants him to go, nor does she need him. This give and take elastic romance follows them for the remainder of the show, building to an implosive finale. All the while an old man sits downstage left, occasionally commenting on the inevitable train wreck. 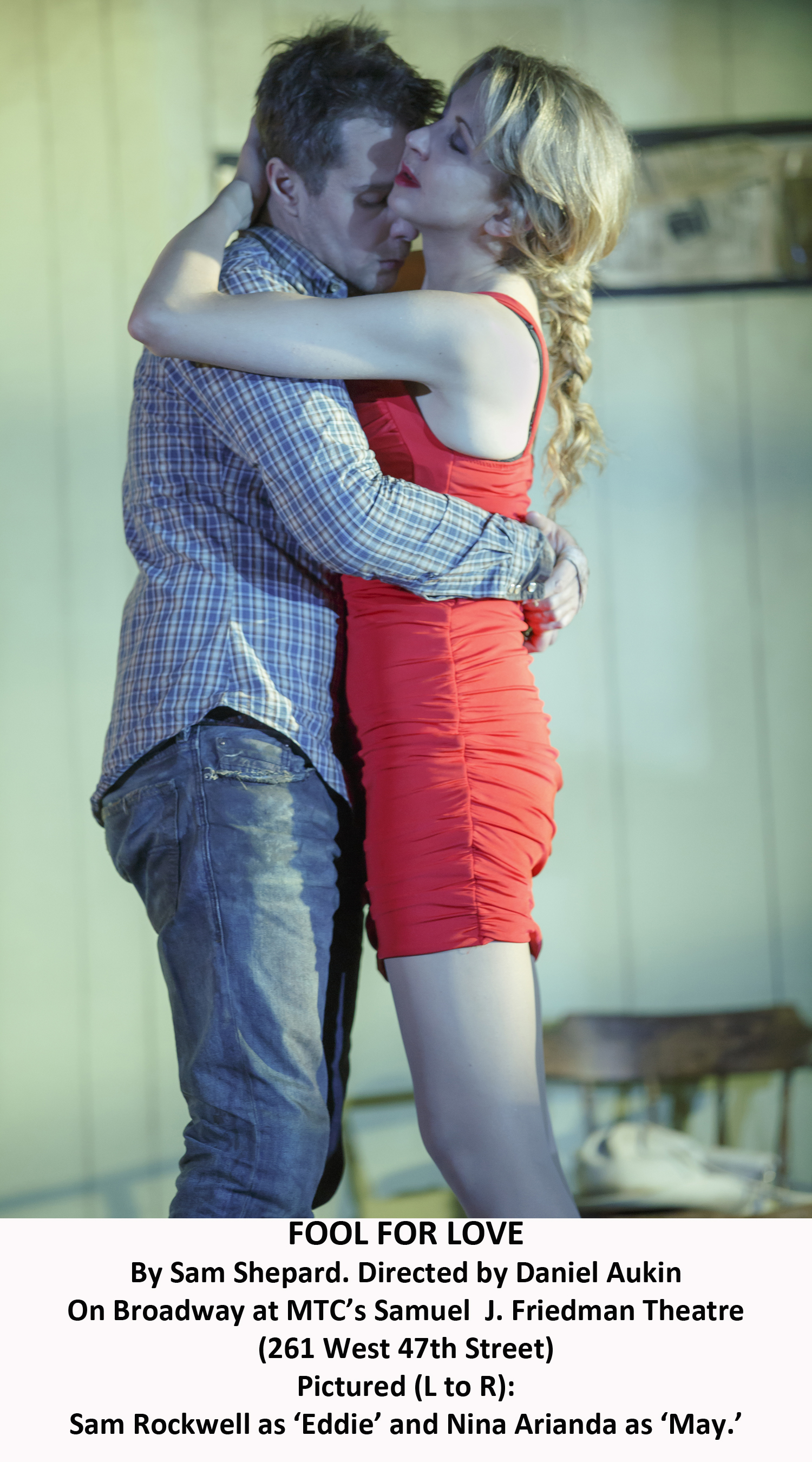 There are promises in this relationship. Those promises are broken. There are lies here as well. Neither are good for each other and yet the intense connection is palpable.  The Eddie and May pairing is, metaphorically speaking, akin to the previously mentioned toaster pastry. Why? Pop Tarts are bad for you, and yet they are unequivocally scrumptious.  They are loaded with unhealthy chemicals. We’re not even sure what that frosting is made of and the fat and carbohydrate count? Fuggetaboutit! We are led to believe that they are made with real fruit and fortified with vitamins and minerals, but we know damn well that this is a cunning marketing ploy to assuage our conscience. Deep down, we know  they are fortified with substances that will, in time, compromise our body’s functionality. We swear them off because we know their  insidious nature of clogging our arteries and increasing  our risk of obesity. We vow not to eat them again. Days pass and once again,  we find ourselves at the store, their cobalt blue packaging staring into our eyes like a forlorn corgi at an animal shelter. Our defenses weaken. We clutch them as we would a lost child  and before long, we’re reunited with our comforting lovers, Frosted blueberry and Brown sugar cinnamon.  The foil packages are open and the 8 pack box is soon depleted, leaving us with the confusing paradox of simultaneous regret and satisfaction.

We know these tarts-Eddie and May-because at some point in our lives, we have  been these tarts—perhaps not to their degree of volatility, but we have foolishly stayed with the toxic lover who is obviously wrong for us but too intoxicating to leave.

Manhattan Theater Club’s production is simmering and sultry thanks to this fine cast whose only addiction is a commitment  to quality acting. Shepard’s style might not appeal to everyone, but then again pop-tarts don’t pique all palates either.

Fool for Love plays on Broadway now through December 13th  at the Samuel J. Friedman Theatre 261 W. 47th between Broadway and 8th ave. For tickets and information visit:  http://www.manhattantheatreclub.com/