You are here: Home / ENTERTAINMENT / ARTS / William Schermerhorn brings “The Hope of Christmas”

William  Schermerhorn isn’t a pie-eyed Pollyanna, but he is a self-described optimist. The two time Emmy Award winning lyricist recently commented during a face to face interview  about the state of New York City before and after Pope Francis’ visit. “Everyone had this burst of optimism and a feeling of good will. After he left, it was as if the world fell apart again. So why can’t that feeling go on just a little longer?” Fortunately, Schermerhorn may be getting his wish with the release of a brand new Christmas album entitled The Hope of Christmas.  Earlier this year, he teamed with Multi-platinum and Tony nominated singer-songwriter Ann Hampton Callaway to pen 12 holiday themed songs for the album, released on October 9th.  Schermerhorn admits that the title song was a challenge, but one worth taking. He writes:

The hope of Christmas/Touching hearts beyond all reason/The Yuletide flame that burns anew/Warming souls with love and cheer/A wondrous glow to last throughout the year.

“It’s really the way that Ann and I conduct our own lives,” he says. “I think that putting out songs with positive messages and working together is a way for that spirit to catch on again,” he continues. “It’s a way for me to ask how I can contribute to humanity instead of taking from it.”

His full time contributions meet that criteria. In addition to lyric writing,  Schermerhorn’s day job as the creative director for Macy’s brings joys to the masses with both  the annual  Macy’s Thanksgiving day parade and their Fourth of July spectacular. It’s a post he has held primarily since college graduation and the platform for which he nabbed his Emmy awards.

He draws inspiration from “just about anywhere” and they can strike at any time, but he prefers to write lyrics first, rather than fitting them into a finished song. “I’ve dabbled with doing it the other way around,” he says, “and it really doesn’t work for me. Sometimes the idea has been rolling around in my head for a week or two, and all of a sudden, I just put it right there on the page.”

Schermerhorn had the great fortune to be mentored by his childhood  neighbor, Clark Gesner, who wrote You’re A Good Man Charlie Brown.  “We met because I was on his huge farm house property making a high school film about Abigail Adams. I often filmed on his property without permission. One day he came out to talk with me. We hit it off and he sort of taught me how to write lyrics.” 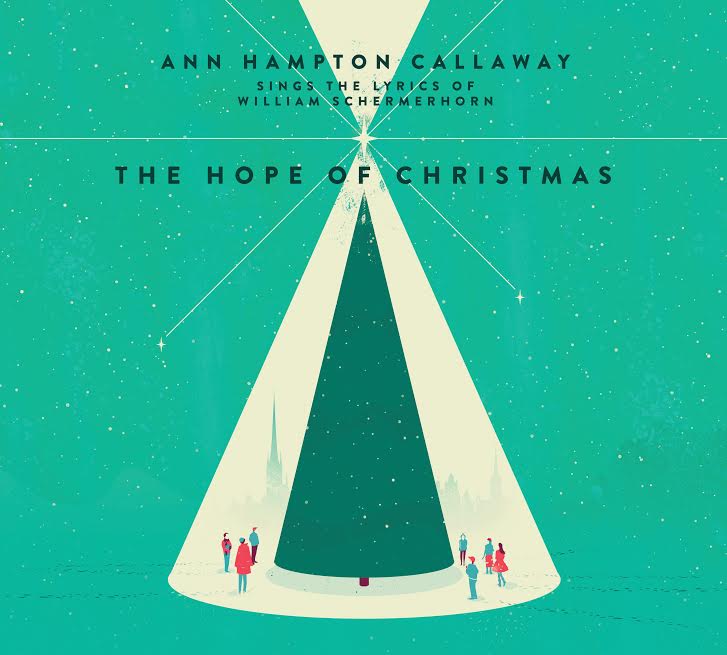 Once a song is finished, The Philmont, New York native determines who would be the best composer for the piece.  He has many fine ones to choose from, including Callaway herself, who has contributed hits for seven of Barbara Streisand’s CD and wrote the theme to the hit Televison series The Nanny.  He’s also teamed with Michael Feinstein, Matthew Sklar, and fellow Emmy Award winners.  Each of the composers have contributed to the album including  “Christmas Isn’t Christmas At All”, composed by his late friend, Milton DeLugg.

DeLugg, who passed away in April the age of 95, was the music director of the Macy’s parade and also a World War II Veteran. He often shared some remarkable stories with Schermerhorn about the company he kept in the military. “He composed music alongside Frank Loesser and began telling me stories about his fellow solider, Freddy Brisson (who went on to become a well-known Broadway producer).  Actor William Holden was their commanding officer, and legendary baseball star Ted Williams was their coach.  I said, ‘Milton, there’s a show here!’  Shortly thereafter, we started putting together a musical which I’m still writing called Swing Wings. It’s all about the Army Air Corps in 1942.”

For now though, the decorous lyricist is focusing his energies on sharing The Hope of Christmas  with the world. The creative team behind it is proud to share proceeds of the recording with MCG Jazz, a non-profit that supports jazz and music education in the Pittsburgh, PA area. Grammy Award winner  Marty Ashby, executive producer of MCG  Jazz, produced the album.

Those wishing to meet Schermerhorn and Callaway in person will have the opportunity on December 1st at Barnes and Noble, 150 East 86th Street between Lexington and 3rd ave. The discussion and performance begins at 7 PM.

The genteel Schermerhorn is both enthusiastic and humbled by the project. “If I touch a life through music years down the road, then it will have been worth it.”

To purchase The Hope of Christmas  click here ,  buy  on iTunes, or ask Santa Claus for an early present and avoid naughty behavior until 2016.