How much would you pay to dine with Angela Lansbury? That was the question posed by actor Richard Kind this past Monday evening in front of theater aficionados at Manhattan’s posh Guastavino’s. Kind led an auction which raised funds for the York Theater Company. Stage and screen celebrities were gathered to honor Dame Lansbury, who turned 90 years old last month. With her extensive Broadway credits, it was only fitting that she be honored with the Oscar Hammerstein Lifetime Achievement Award.

The term “legend” is used so often that its meaning has become diluted. Few would argue, after watching Monday’s line-up however, that there is hardly a more appropriate descriptive. The answer to Kind’s question turned out to be a total of $6,800 (2 separate parties bid $3,400 and they decided to share a meal).

Following the dinner and auction, Something Rotten star Brad Oscar kicked off the evening with a parody of “It’s Today” from Mame and introduced the evening’s emcee: Lansbury’s former Sweeney Todd co-star and silver haired heartthrob, Victor Garber. Brian Stokes Mitchell followed with a rich and stirring version of “This Nearly Was Mine” from South Pacific.

Melissa Errico performed a medley of Anna’s songs from the The King and I, a role which Lansbury played for a very brief time in the 1977 Broadway revival. Later, John McMartin read a letter written by an absent Stephen Sondheim. Sondheim wrote, “If Oscar Hammerstein would have lived long enough to see you play Anna, he’d have written a sequel.”

Lansbury made her Broadway musical debut in 1964 in Sondheim’s Anyone Can Whistle. The fresh faced Yale Whippenpoofs vocalized on a lovely arrangement of the title song.

Composer Alan Menken was particularly moving as he sat down to the piano and recalled the day when Lansbury and the late Jerry Orbach shared the recording studio for Disney’s Beauty and The Beast. He then sang the title song, made popular in the movie by Lansbury’s character, Mrs. Potts.

Klea Blackhurst, Karen Ziemba, Judy Kaye, Karen Mason, and Marilyn Maye all payed individual homage through song to the octogenarian. Maye sang a beautiful rendition of “If He Walked into My Life” from Mame and told the audience that her birthday is next month. “I will be as old as there are keys on the piano,” she said.  Then continued, “Usually I’m the oldest person in the room. Thank goodness for Angela Lansbury!”

Len Cariou, who originated the title role in Sweeney Todd, wound down the evening with a musical mash up tribute parody, but not before James Earl Jones took to the microphone to offer some words about his Driving Miss Daisy co-star. “When you drive someone to the Piggly Wiggly eight times a week, you get to know them quite intimately,” he quipped. He then went on to lavish praise  on Lansbury citing the fact that in spite of her age, she remains “younger than springtime”

A visibly touched and humbled Lansbury expressed her gratitude, both for the award and for everyone who has ever supported her career. Those in attendance could surely echo Auntie Mame’s jubilant observation: “I know that this very minute has history in it, we’re here!”

The York Theater Company will continue to celebrate the joys of musical theatre with the New York premiere of the Stuart Ross charmer, Plaid Tidings, beginning December 8th and running through the 27th. For tickets and info, click here. 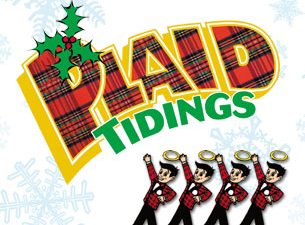