Everyone’s most wonderful time of the year has arrived!  No. Not Christmas necessarily. I’m referring to that sacred period between Thanksgiving and year-end, when employees all around the world are spending company time surfing the internet for holiday bargains, posting unwanted junk in the sale section of Craigslist, updating their resumes, searching for new jobs, and plotting their 2016 escape plan from current hellish workplace environments. Just me?

On Thursday, December 3rd   at 3 PM ET, you’ll want to take a break from all of your exhausting, non-work related web surfing and point your browser here.  Why? Because Goldstar, the leading ticketing commerce outlet that has provided deep discounts to  great events for over 6 million people is proud to announce their first “Coffee With Goldstar” series.

George Takei, star of the hit Broadway show Allegiance, will kick off the free 30 minute on-line series which invites guests to log on and ask Takei anything.  Trekkies will recall his long running role as Hikaru Sulu on the original Star Trek series. For the rest of us who don’t live in our parent’s basement and worship at the church of Gene Rodenberry, Takei can also be known by his fervent  LGBT activism and social media savvy.  Show queens and theater geeks will giddily recognize him from his current role in Allegiance, a musical which marks Broadway debut of this 78-year-old celeb. The critically acclaimed tuner is inspired by his own true-life experiences during the Japanese-American internment in World War II. 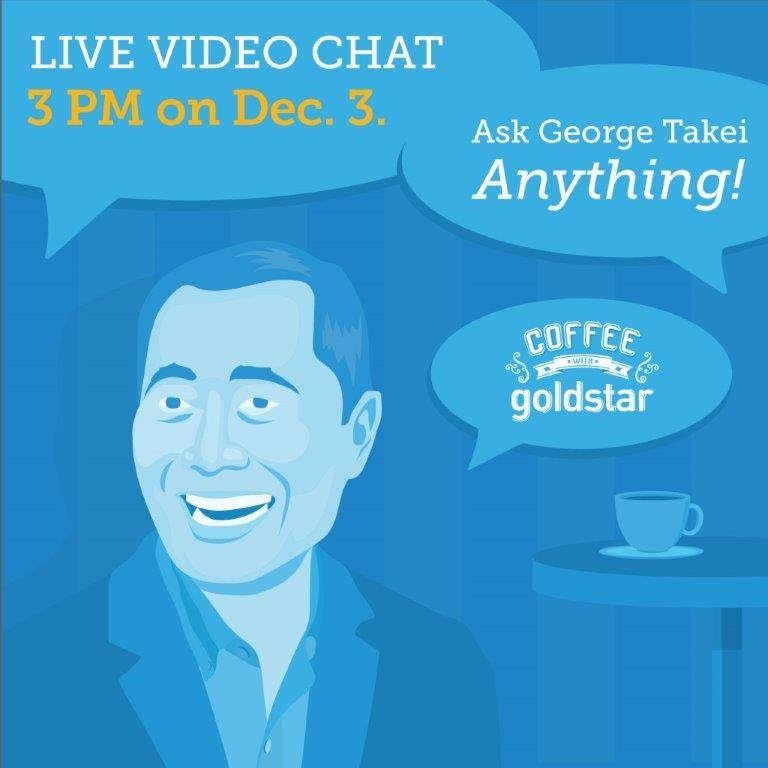 “We’re bringing Broadway right to the people. Whether it’s on a mobile device or desktop — anyone with access to the internet can simply join in the fun and ask ‘Uncle George’ anything they want,” explains Goldstar CEO Jim McCarthy.

The “Coffee With Goldstar” series will feature other Broadway stars, musicians, comedians, and dancers. More news will be announced soon.

So grab a cup of Joe, log on to the Allegiance Event Page tomorrow, Thursday Dec. 3rd at 3 PM ET, and be part of the conversation. After all, when the boss appears, it’s easier to look like  you’re doing real work when you’re sitting at your desk than it is to  offer an explanation about why you’re napping in the supply closet.