In our current age of technology, self-will, and instant gratification, it’s difficult to wrap our heads around the idea of a simplistic lifestyle.  New Yorkers especially, are known for their jet paced lives.  Even if you were to ask a contemporary resident of Oshkosh, Wisconsin what brings joy and meaning to their days, it’s highly doubtful that they would respond with:  “furrowing fields”, “repairing the henhouse”, “reaping hay”, “laundering garments” or “gathering eggs”. Yet these activities translated to spiritual enlightenment for the Shakers, an 18th century group of men and women who lived communally in Colonial America. 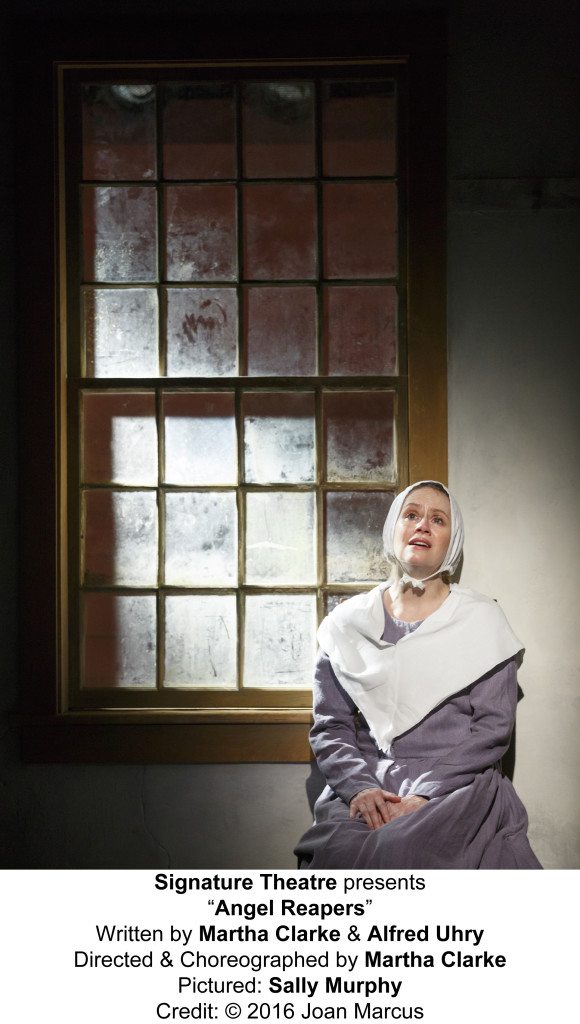 Signature Theatre is currently exploring this fascinating religious movement in playwright Alfred Uhry’s Angel Reapers. Directed and choreographed by dance legend Martha Clarke, the piece beautifully delves deeper into the basic human nature of repression and the darker manifestations it can bring.

The movement was founded by Mother Ann Lee (Sally Murphy) who believed that she was the second coming of Christ . With the help of her brother William (Nicholas Bruder), she was able to convince approximately 6,000 followers to join her in acts of worship which included fits of laughter, involuntary convulsions, and speaking in tongues. They also sang simple songs and danced with one another, celebrating their closeness with their Creator.  However, they abstained from sexual intercourse; their belief was that Adam’s original sin was the engagement of sex and therefore, they would end up going to hell if they yielded to their urges. Guess what? The sect faded away.

What makes this 70 minute piece so interesting is the glimpse into their collective psyche and the beauty in which Clarke stages this work. The physicality demanded of the cast is fluid and jaw dropping, and while none of them are performing Cristina Aguilera riffs, there is a purity in their voices. Uhry has borrowed much of his book from actual writings of Shakers, but digs even deeper by exploring the sexual tension, both homosexual and heterosexual in nature.

Although one must respect the work ethic and devotion that this group acknowledges, it is hard not to view them as cult-like and creepy. Wiliam’s infatuation with Sister Ann borders on mental incest and their excitement for merely laundering garments is downright bizarre.  One dissenter, Valentine Rathburn (Rico Lebron) who has fallen madly in love with his fellow shaker, Mary Chase (Ingrid Kapteyn), speaks defiant words that might well describe our current political climate: “Ann Lee and her brother play their magic games and try to bring the whole creation of men to trial. The scheme of that self-styled female Christ, Ann Lee, is so naked that every rational mind should recoil at the thought of falling in with it. Yet multitudes have done so!” Given the mass appeal of a certain unhinged presidential candidate, it appears that while the Shaker community has faded into obscurity, brainwashing sadly remains a concept  as high as the heavens.

For tickets and information, visit http://www.signaturetheatre.org/. To save yourself from hell, don’t have sex! (Just kidding)