Danai Gurira might be one of the strongest and most important voices in American Theatre today. The playwright’s production of Eclipsed gathered thunderous applause and approval from both critics and audiences when it premiered off Broadway at the Public Theater last year and subsequently, it moved to Broadway’s Golden Theatre, where it has received just as much positive buzz. This marks the second New York show in a year for Gurira, who also stars as Michonne in the AMC television series, The Walking Dead.   Her other hit show, Familiar, received an extension at Off Broadway’s Playwright’s Horizons before closing on April 10th. 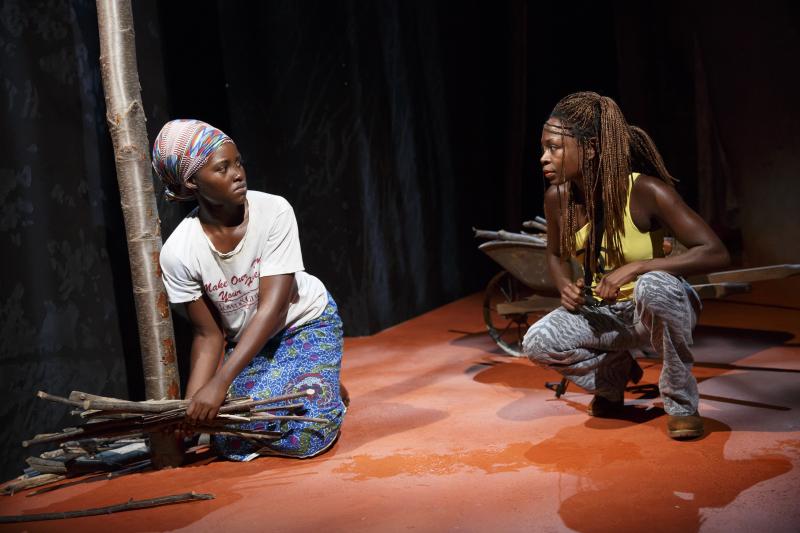 Eclipsed has the star power of Academy Award winner Lupita Nyong’o (12 Years A Slave), but while she is turning out a phenomenal performance, the show would be just as effective without the celebrity factor. Gurira’s story, set against the backdrop of the Liberian Civil War, introduces us to The Girl (Nyong’o), Wife #1 (Saycon Sengbloh), Wife #2 (Zainab Jah), Wife #3 (Pascale Armand), and Rita (Akosua Busia). The four are held as sexual slaves to their captor,  a looming and frightening figure in spite of his offstage presence.  As the quartet struggles to make sense of their oppressive and abusive standings in their ramshackle hut (sparcely but effectively designed by Clint Ramos), they occasionally receive visits from Rita, the voice of peace who urges the girls to seek non-violent resolutions. Wife #2 rises up to become a rebel fighter and encourages The Girl to join her.

There is a sense of guilt that washes over you as you go through Eclipsed. Prior to sitting through the 2 hr. 15 minute drama, you may have been complaining about your slightly cold eggs, served to you at brunch by a presumably apathetic waiter. Or perhaps your new Burberry hand bag is on back order?  Eclipsed jolts us into an unsettling, but painfully real atmosphere that brings the problems “over there” to our minor first world American problems.  It is easy to pick and choose news articles that bring us discomfort, but Gurira forces us to think deeply and sensitively about the not so distant history depicted here.  The play has an even longer lasting permanence when compared to today’s headlines of violence at the hands of Boko Haram.

It’s nearly impossible, and one might think, inappropriate for Gurira to infuse humor into the plight of her characters. And yet she manages, delicately and beautifully, to create an air of lightheartedness in this war-torn tale. Jen Schriever’s lighting design, along with Broken Chord’s original music and sound design amplify this dystopian piece, skillfully directed by Liesl Tommy. Expect Eclipsed to rack up the Tony nominations because,as it stands right now, the best cast of the season is starring in the best play of the season.

For more information on Eclipsed, including how to get tickets, check out their official site.