You are here: Home / ENTERTAINMENT / “Oh Hello On Broadway”: Kvetching is the New Black

“Charmed, I’m sure”, says Gil Faizon (Nick Kroll) after nearly every introduction. It’s hard not to be. Faizon, along with his best friend and roommate of 40 years, George St. Geegland (John Mulaney) are the epitome of old school New Yorkers who have seen it all, know it all, and are telling it all at Broadway’s Lyceum Theater in Oh,Hello On Broadway.

Kroll and Mulaney were college friends whose idea for the show was spawned at New York’s Strand bookstore. They noticed two older gentleman, each of whom were buying their own used copies of Alan Alda’s auto-biography Never Have Your Dog Stuffed. They observed the gentlemen, who appeared to be life-long friends, and were inspired to create a fictitious show around them. 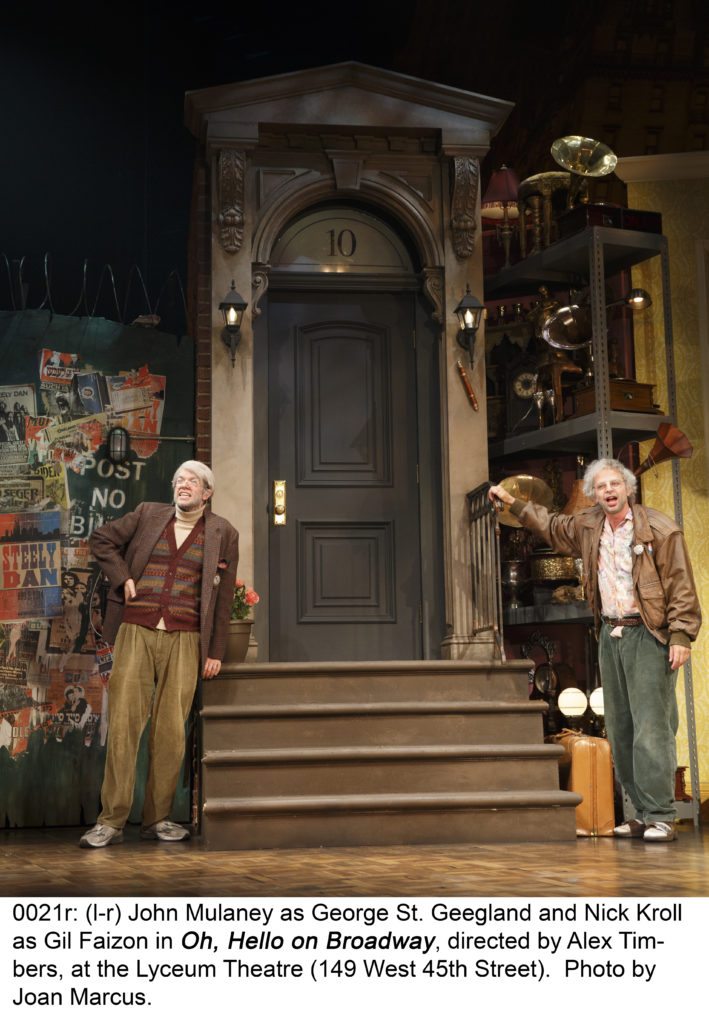 Neither are strangers to sketch comedy. Kroll was a contributing writer to Comedy Central’s Chapelle Show and eventually starred in his own series The Kroll Show. Mulaney served as a writer for Saturday Night Live and appeared in his own short lived sitcom, Mulaney, on FOX.  With Gil and George, the pair have acquired legions of loyal fans, staging Oh,Hello downtown to sold-out audiences before producers made the wise decision to move them to the Great White Way.

If they look like children playing dress-up, there is no need to criticize Annamarie Tendler Mulaney or Leah Loukas, their make-up and wig consultants.  Kroll and Mulaney, who are in their thirties, use an intentional “budget” elderly look as a tongue and cheek mechanism—and it works wonderfully.

The plot is paper thin and the sophomoric jokes abound, but do not be fooled into thinking that this is only for frat-boys. On the contrary, Kroll and Mulaney, who wrote their own material, have a knack for combining Borscht belt yuks with intelligent, existential humor. When was the last time you heard Jean-Paul Sartre referenced in a stage comedy? 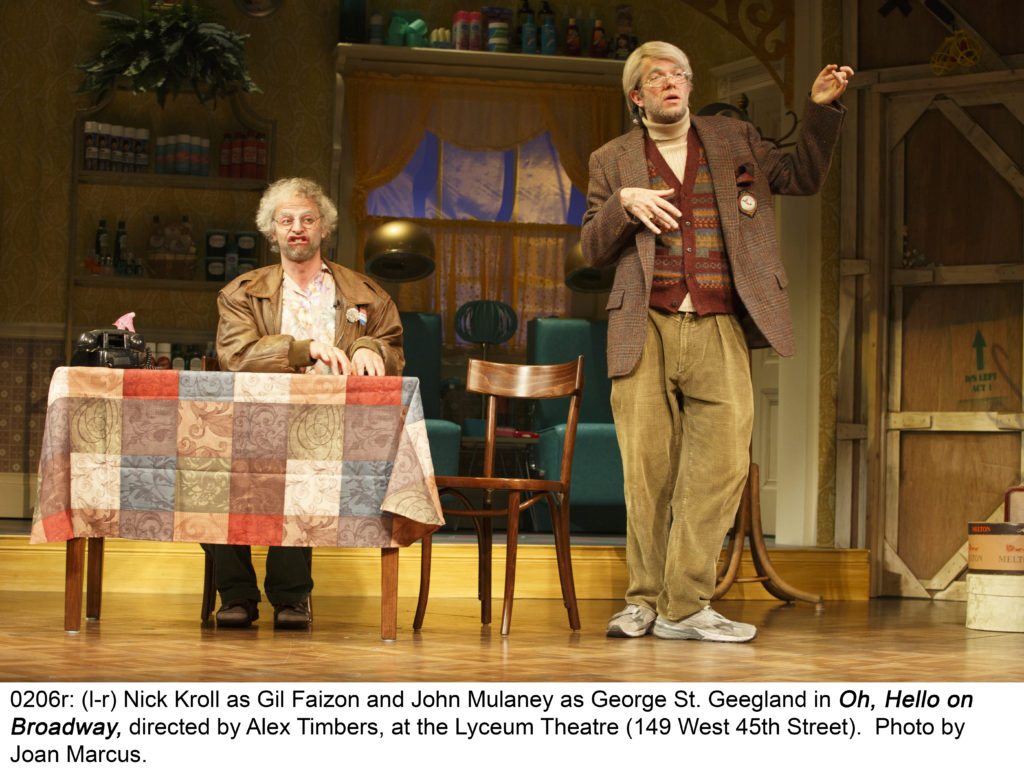 The bits are random, including a TV show that they pitch to NY1 called “Too Much Tuna”. Each night, the old buzzards invite a special guest to the stage and invite them to indulge in a mammoth tuna salad sandwich.  Usually, it is a well-known celebrity, generating even more excitement from an approving audience.  They also use Scott Pask’s comical set in a clever way. In order to meet budget requirements, Gil and George inform us that the set is a hodgepodge of previous sets, including Steel Magnolias, I Am My Own Wife, The Pillowman, and the stoop from Television’s The Cosby Show.

Oh, Hello is not nearly as crass as it could be, but it’s still not Mister Rogers’ Neighborhood.  Mature theatergoers who are already fans of the shtick should leave the Lyceum Theater thoroughly satisfied and those who just met these cantankerous upper west siders will be, as Gil says, “Charmed, I’m sure.”

Oh Hello  On Broadway at the Lyceum Theater (West 45th between 6th and Broadway). For tickets, visit the box office or click:  Oh, Hello.