Heisenberg, the extremely human play rooted in a theory of Quantum Physics, is a mystery within itself. This is not to suggest that text is incoherent, but rather that its leading characters are so Delphic we walk away with even more questions than we did before we met them.

Simon Stephens two hander takes place on Mark Wenland’s extremely sparse stage, (One that only consists of two benches), intended to be a London train station. It begins as Georgie Burns (Mary Louise-Parker), a forty-something who plants a kiss on the neck of Alex Priest (Denis Arndt). Georgie claims that she had mistaken him for the wrong man, although we are not completely certain. She turns out to be somewhat of a charlatan and when they meet again, she admits that everything she told Alex in their first meeting was a lie.   Alex is a quiet, self-educated butcher who grapples with the own mysteries in his mind. He’s also significantly older than Georgie, but it won’t negate a romance. 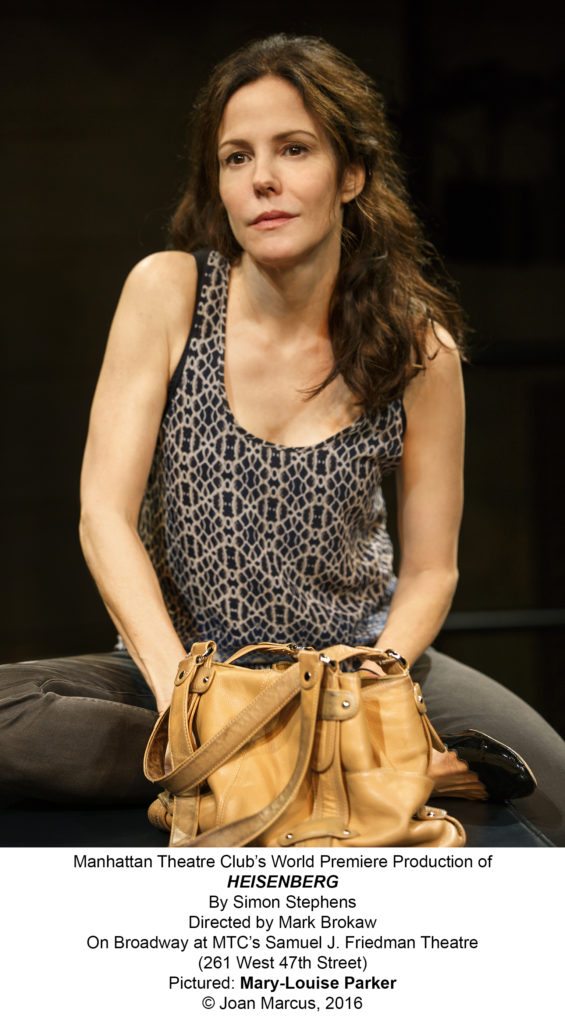 There are curious aspects within Manhattan Theatre Club’s play,  the stark age difference notwithstanding. Please do not misinterpret the last statement as ageist. Yet I must confess a slight awkwardness towards the relationship. At times, it was difficult not to view it in the manner of father-daughter.  Even more to ponder is Alex’s tolerance towards Georgie. She talks a mile-a-minute and is clearly a little bit “off”. Had I been in Alex’s shoes, I’d have run in the opposite direction within moments of an interaction.  Parker’s vocal affectations were also bewildering. At first, I thought she may have had a learning disability, but in time, it was clear that Georgie is simply an unmedicated, high-strong mess. Arndt is the true voice of sanity and while his life might not be a parade of excitement, his stoic portrayal of Alex is comforting and reassuring. 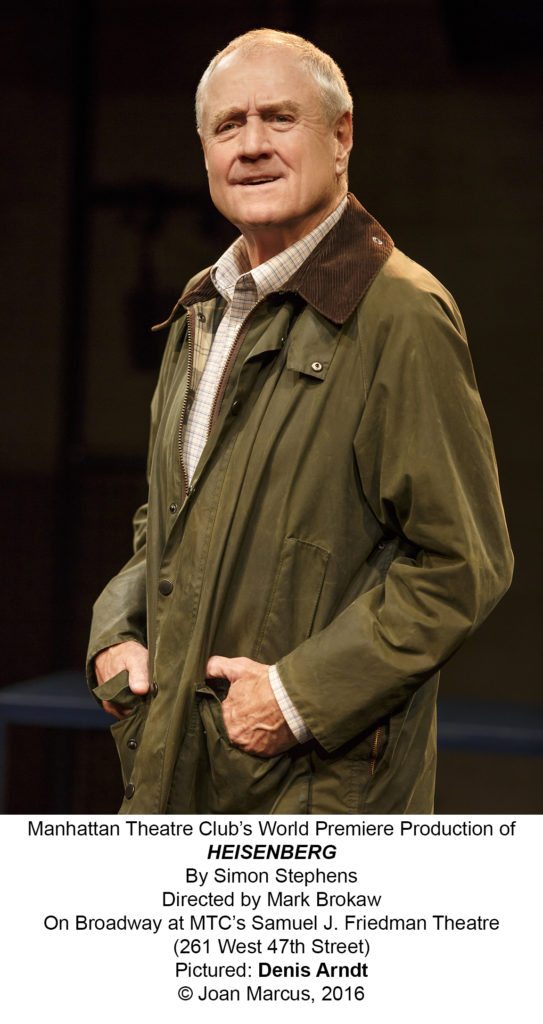 Ultimately, Heisenberg is a smart, sensitive, often funny drama-comedy by Simon Stephens that forces us to look at unconvention in a new light. To outsiders, we may not understand the attraction one feels for another but as my wise Grandfather once said, “There’s a cap for every bottle.”

Heisenberg on Broadway at the Samuel J. Friedman Theatre (West 47th between Broadway and Eighth). Now through December 11th. For tickets and more information: http://heisenbergbroadway.com/