From an early age, we’re taught that playing with our food is socially impolite. Fortunately for cosmopolitan diners, Chef Toshio Suzuki didn’t heed that advice. Suzuki is best known for his long time stint at Sushi Zen. The beloved midtown hot spot attracted business clientele, pre-theater diners, and celebrities alike and-in novelty form-was one of the few establishments to prepare and serve “fugu,” a potentially lethal puffer-fish that could put you in a body bag if prepared improperly.

After 30 years in business, Sushi Zen closed its’ doors in February 2016. New Yorkers hadn’t been that sad since the final episode of Knots Landing. Just a year later, however, Suzuki carried his fine reputation and experience a few blocks north to join forces with his son, Yuta, his protégé, Kentaro Sawada, and Chef Takashi Yamamoto. Together, they’ve turned an unused basement of an office building on West 47th street into a glorious zen paradise called Suzuki.

From the instant you descend from the staircase or step out of the elevator at this hidden gem, the sights and sounds of the frenetic city above drift away and are replaced with calm and serenity. Suzuki, which is quite spacious by New York City restaurant standards, is comprised of three separate areas: Three Pillars Lounge, which concocts unique cocktails like the Fujiyuki, a lightly fruity drink served in a beautiful bowl with an ice mound in the middle resembling Mt. Fuji. Straws add to the adult fun in this sophisticated version of a slushee.  Mixologist Alex Ott supervises the posh spot and creates specifically themed  libations from the menu.  Three Pillars also offers the option of a full bar.

Sushi lovers can satisfy their cravings at the beautiful wooden bar of Satsuki. Toshio and Sawada hold court here and present the freshest and finest sushi you’re likely to find in midtown. Each day, the restaurant receives a shipment of high grade fish directly from Japan (except for the tuna, which comes from Spain). At only 10 seats, space is limited and once word gets out, this will become a regular “go to” for fans of quality tuna and other cuts of raw fish.

The crown jewel, however, is the main dining which bears the owners’ surname. Suzuki, helmed by Chef Yamamoto offers an absolutely distinctive dining experience in the form of kaiseki, a multiple course Japanese style dinner that far exceeds normal dining standards and melds into the world of elegant art.

Kaiseki, which literally means, “bosom-pocket stone”, dates back to the 16th century and originated with Zen monks. Individual, delicate dishes are prepared and brought to the table, all of which are stunning creations. 10 courses seems like a large amount of food but by the end, you will leave perfectly satisfied and not over-stuffed.

The meal began with Zensai: sesame tofu with sesame sauce and paprika jelly. It was accompanied by a scallop with scallion and vinegar miso and a pumpkin castilla, a savory sponge cake with chicken and truffle cheese. Wanmori, a clear palate cleansing and pleasing soup with rice powder, cherry blossom leaves, and sliced carrots, followed Next came Tsukuri, a variety of mouth-melting sashimi that included  tuna, red snapper, shrimp, and  sea urchin.  It was served in a bowl of gorgeous cut glass atop shards of white flaked ice. Shinogi came next: two sushi cuts of eel with cherry blossom leaves, pickled cherry blossom flowers, and ginger.  Again, true perfection in taste and design.

Dairy is not ordinarily a component of Asian cuisine, but Yamamoto tips his hat to the French with Shiizakana, a béchamel based recipe with shrimp, mushrooms, and zucchini baked into half an apple with bubbling crusted cheese on top. Yakimono was the next course which included a miso marinated grilled codfish. The piece was hearty, flavorful, and satisfying and was served next to a bed of vegetables. 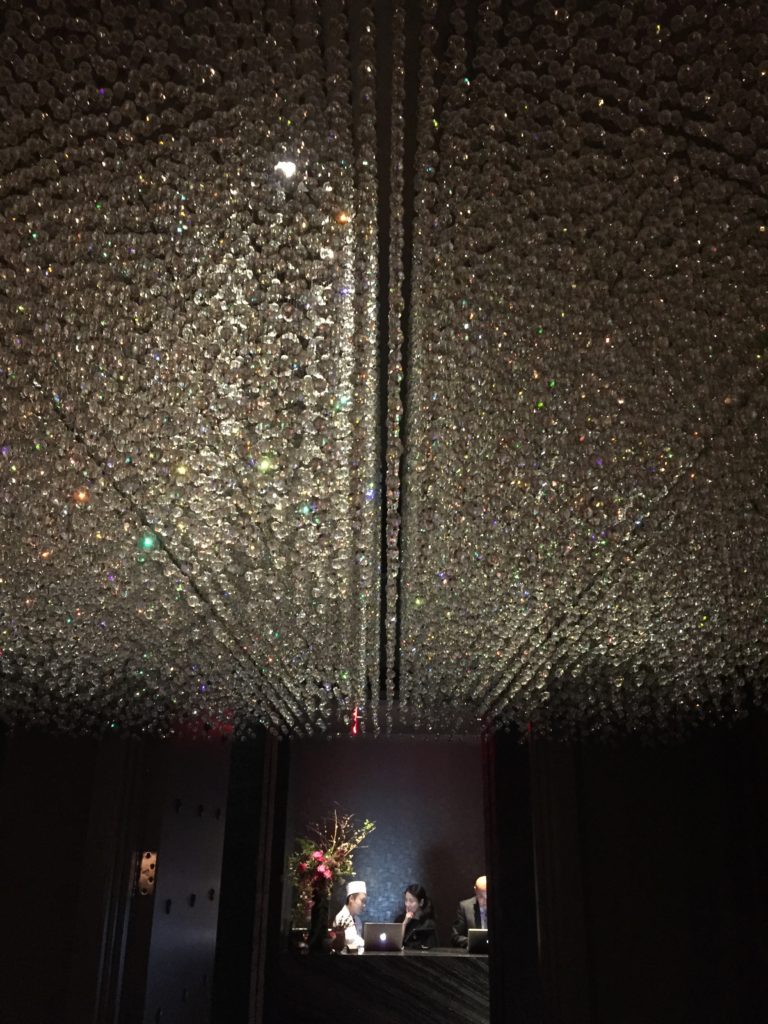 Hot Pot came next. The Nimono course was comprised of bamboo shoots, raw wheat gluten, and baby scallions under a generous serving of wagyu sukiyaki beef. Diners are encouraged to wait a few moments before stirring the pot to cook the raw meat. A beautiful (and heavy) burner rests below, imprinted with stylish Japanese characters.

The meal began to wind down with Shokuji. a crab infused rice with crab meat and peas. It was similar to an Italian risotto without the heaviness. The delicate texture was cooked to perfection and provided a rich seafood flavor.

Another small bowl of soup, Tomewan, evoked a comforting feeling of warmth and relaxation, presumably to aid digestion.

Finally, the sumptuous meal ended—not with a bang, but rather with a subtle and sweet collection of fresh pineapple and strawberries, paired with an airy strawberry mousse atop grapefruit pieces. The final course, Mizumono. 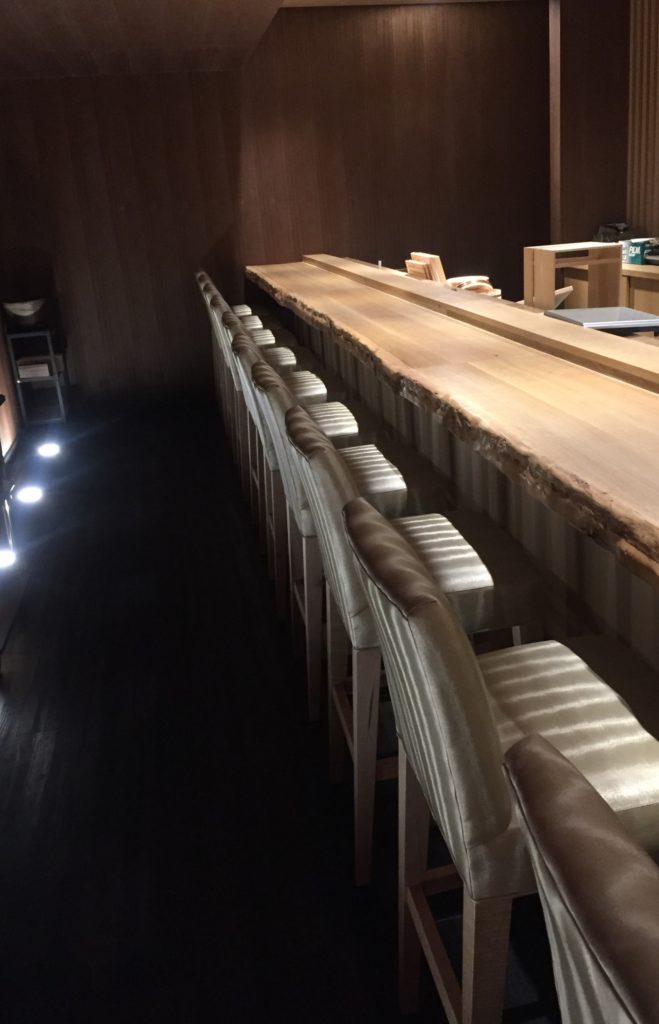 A selection of sake, wine, and beer is available—as are cocktails from the Three Pillars lounge.

Kaiseki is not an everyday meal, nor is it the kind you’ll want to have if you have to rush to a nearby 8:00 Broadway show. It is upscale dining and a culinary adventure that requires all of your senses and a willingness to slightly prolong gratification. I can assure you, however, that the brief pauses between courses will well be worth it and you’ll find the  theatricality unparalleled to other dining establishments. In fact, it is quite rare to find this style of dining found outside of Japan. Even more rare is the high level of preparation from the kitchen. Yamamoto previously worked at Sushi Zen and prior to that, served as a private chef for the Japanese Consulate.

Suzuki is the type of place that you’ll want to simultaneously share with the world, but hope that it doesn’t become so crowded that you’ll never again score another reservation. The service is attentive without being too intrusive. In terms of lighting and ambiance, it is great for business entertaining, impressing a date, or for simply treating yourself to a flawless dinner in order to forget that the world is currently going to hell in a hand basket. If the basket is as finely crafted as the food and ornamentation at Suzuki, you’ll enjoy the ride.