You are here: Home / ENTERTAINMENT / “Groundhog Day: The Musical” is a Squirrely Hodgepodge of Humor

Usually, images of Bill Murray come to mind, as well as strains of  Sonny and Cher’s “I Got You Babe.” Murray, who played Connors in the film, awoke every morning to the song and it became a reoccurring joke throughout the film.

Groundhog Day: The Musical, follows the same plot as its original source material. Connors (Karl), has been tasked with covering the same old news story in Punxsutawney, Pennsylvania. Every year, on February 2nd, townspeople gather to learn the fate of winter, pending Phil the groundhog’s sighting of his own shadow.  The lore is too much for Connors, who fancies himself a serious news reporter and believes that the small town folks lack brains and sophistication. He’s also unhappy with the producer who is accompanying on his vapid sojourn. Rita Hanson (Barrett Doss) is new to the station and new to working with Connors. Inevitably, they will grow to endure each other, thanks to Phil’s inexplicable phenomenon of waking up in the same bed and breakfast in the same small town ad infinitum. 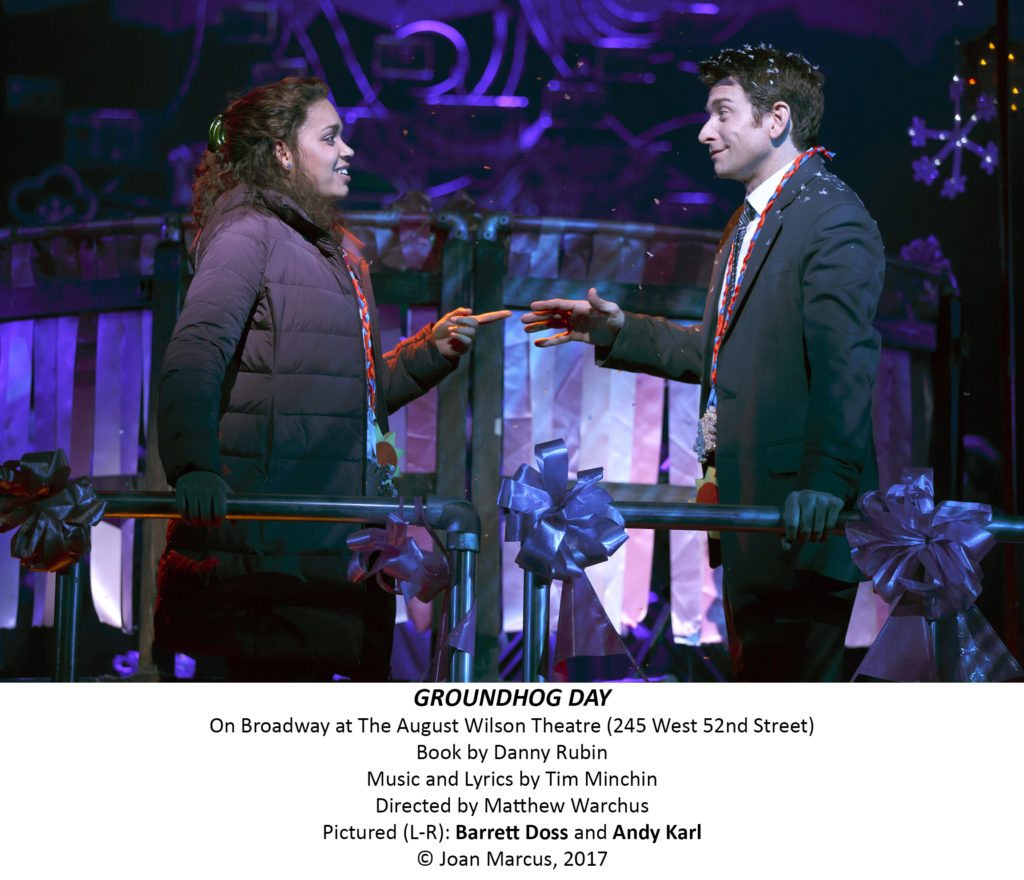 Director Matthew Warchus’ production has none of the movie’s original music, but it does have some witty new tunes and lyrics from Tim Minchin. Warchus and Minchin were last paired on Broadway in another movie adaptation: The Roald Dahl classic Matilda, a show which I absolutely adored and found delightfully macabre and clever.  It struck a consistent tone and, although it attracted children’s audiences, the humor was intended for adults-and perfectly hit the mark.

Groundhog Day: The Musical fails to capture the wry personality that made the movie so endearing. Sure, producers and the creative team behind this stage show will undoubtedly roll their eyes at the comparison, but this is exactly the reason for fresh ideas. Not every movie demands the treatment of a singing and dancing spectacle; this one would have been better left savored in celluloid.  This is not to say that the musical doesn’t have some fun moments. Certain sight gags are extremely funny and some occasional laugh out loud moments are sure to tickle theatergoers. Too often though, the jokes are too sophomoric and lack the edgy comedy that this team can so ably craft. Humor about and targeted for rednecks walks a fine line between endearment and derision.  Although Connors begins the show with disdain for the locals and has a change of heart by the end, it’s hard not leave believing that the underlying message is, “Even middle America denizens are people, too!” With that takeaway, it’s not hard to understand why city dwellers-particularly media types-are criticized for their elitism and condescension.

The energy of the show is frenetic and feels like the effect one has after gobbling a box of maximum strength NoDoz. Pep is hardly a negative thing in musical theater, but not when it melts into the zone of exasperation. We’re rooting for Connors transformation towards an improved self; we just wish it wouldn’t be such an exhausting expedition.  That said, Karl solidifies himself as one the hottest and most talented Broadway stars. His award nominated turns in On the Twentieth Century and Rocky prove that he has range and charisma to spare. Here, he is able to carry otherwise mediocre material to monumental heights.  Karl recently made headlines for an injury that occurred during a preview  performance (the show opened Monday night).  Once he returns, audiences will surely be in for a treat, at least where his performance is concerned. 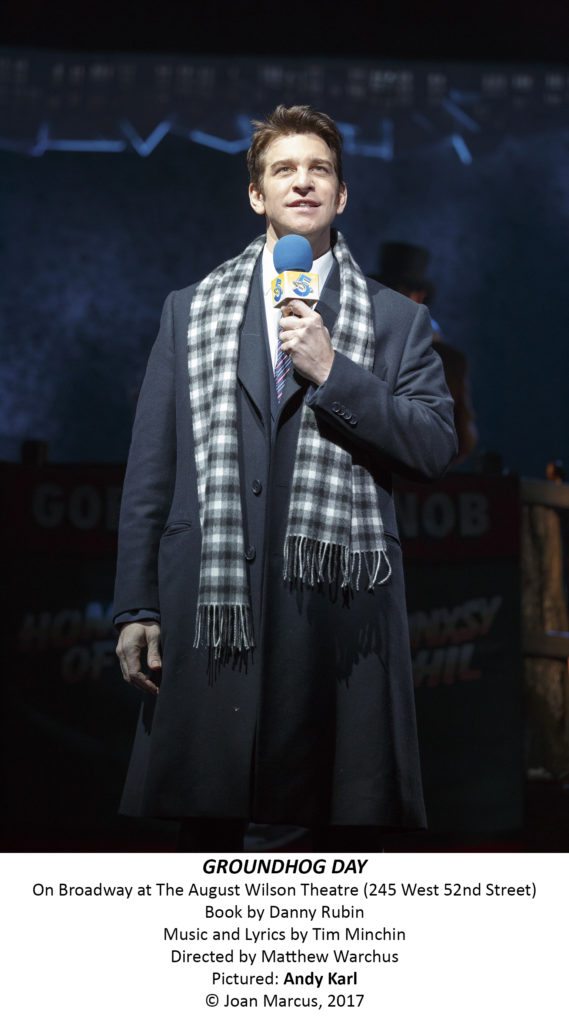 Also curious is “Playing Nancy”, the opening number in Act 2.  One of the supporting characters, Nancy (Rebecca Faulkenberry) sings about being misunderstood in her small town. In Act 1, she and Connors have a brief interaction, but there is scant character development or interest to merit an entire song from her. Granted, Faulkenberry has a glorious voice but in the context of the show, they could have just as well had Jennifer Holliday sing, “And I’m Telling You I’m Not Going”. It would’ve made as much just as much sense.

Groundhog Day: The Musical will find a fan base. It was already praised last year by London critics, where it opened at the Old Vic. Such is the beauty of live theater, reinforcing the truth that there is something for everyone.  Call me as cynical as Phil Connors but I predict that my likelihood of returning to the stage version of Punxsutawney is slim.