You are here: Home / uncategorized / Gala Tribute For Frank Sinatra Will Bring Sparkle to New Jersey

There may be a few restaurants in this town called “Patsy’s”, but only one of them was good enough for ‘Ole Blue Eyes. That one was-and still is—situated in midtown on West 56th street between 8th avenue and Broadway. Since 1944, The Scognamillo family has taken great pride in serving fine quality Neapolitan cuisine to celebrities, politicians, loyal customers, and tourists alike.

This Saturday, April 29th, Chef Sal Scognamillo, along with Deana Martin, Sal Valentinetti and other glittering personalities will host a Gala Tribute entitled “If These Walls Could Sing.”  The night will pay homage to Frank Sinatra, Frank Sinatra Jr., Dean Martin, and their beloved food haven, Patsy’s Restaurant. It will take place at the Ciccone Theatre in Paramus, NJ and will unequivocally  be a night for the books.

Speaking of books, Chef Sal will not only cater the Italian feast. He’ll also be on hand to sign copies of his latest cookbook, Patsy’s Italian Family Cookbook, featuring recipes that are showcased in the restaurant’s kitchen.

Recently, Manhattan Digest sat down with the celebrity chef at his midtown eatery to talk about the event and what Frank Sinatra meant to his family and the business.

MD: How did this event come together?

SS: I have a good friend, Peter LeDonne who used to do advertising for Frank Sinatra. In fact, that’s what brought him to Patsy’s originally. He’s a producer of the event at the Ciccone Theater at Bergen Community College and has been telling me for years to put a concert together. He suggested a cookbook signing and preparing some of the recipes from it before the show. Then we found some entertainment. My wife recommended Deana Martin. I was also lucky enough to land Sal Valentinetti, who was a winner on America’s Got Talent. He sings the songs of Sinatra and does a wonderful tribute to him.

The opening part of the night will feature George Pettignano, who also does a lot of the classics. We’ll also have a never before seen interview with Frank Sinatra, Jr. because it will be one year that he’s passed. He lived under a big shadow, so we want to remember him too.

The two things that Italians do best will be spotlighted: music and food (laughs). 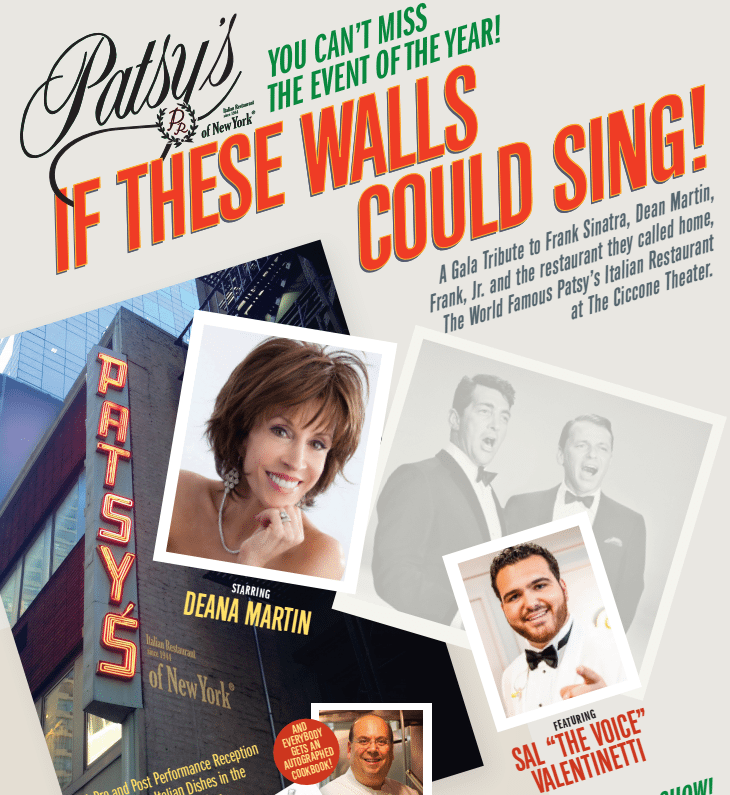 MD:  Talk a bit about  the family history of Patsy’s?

MD: And your father continues to work here?

SS: I’m so blessed. He’s 85 and he’s still here. He’s been here since he was 11. My children are interested in continuing in the business. I’d never force them, but they may carry the legacy. My wife, who used to do maritime law, is now working with me full time.

MD: Did you grow up thinking about other career options, or did being in the restaurant at such an early age kind of shape your path?

SS: I had no idea that I’d do this! I majored in television and film production.  It was a classic story: I worked for six months and then couldn’t find work. My dad asked me if I wanted to cook and I said, ‘ok!’ Now, I love what I do and feel as though I’ve never had to work a day in my life. I buy from the same suppliers that my grandfather used. I made a promise that I’d buy from them and have kept that promise.

MD: What are your most popular items on the menu?

SS: Classic chicken cacciatore, spaghetti and meatballs, The “parmesans”:  veal, eggplant, and shrimp. We do a really great tripe stew too with peas and tomato sauce. These have all been on the menu since day one.

MD: Obviously, this upcoming concert event and your establishment is all about Frank Sinatra. Does it ever bother you that people always ask you to talk about Sinatra and the family? Does it ever irritate you that the quality of what you do has been overshadowed by your most notable patron?

SS: I’d say ‘no’ to both, really. The only overwhelming feeling I have is one of gratefulness. In a city of over 20,000 restaurants, you need to have people see you. If people want to eat here because they found out Frank ate here, then it’s a blessing.   I was fortunate enough to meet him when I was 15. He had such a great affect on people.

Tony Danza, who has become a close friend, shared a story:  After two mega-hit sitcoms (Taxi and Who’s The Boss) his mother would joke with him that he hadn’t really made it in Hollywood until he introduced his own mother to Frank Sinatra.  Well, Danza ran into Frank daughter, Tina, in Los Angeles. Tina told Tony that her father was a huge fan of Who’s The Boss. Tony said, ‘Well, have him come on the show!’ The next day, the show’s producers got a call from Sinatra’s team and Sinatra appeared on the show. Danza flew his mother to the set where she met Frank!  It was the thrill of her lifetime.

Michael Buble started coming here just because he heard it was Frank’s place. P Diddy is another one that was inspired by Frank and just had to visit Patsy’s.

We also sell the sauces we make here in a jar. Many people who have bought the sauce nationally will come here because of their experience with our product.

MD: What will be on the menu on Saturday?

SS: I’ll be doing recipes from the cookbook..small meatballs, some eggplant dishes, and desserts. On the brochure it says, ‘the event starts at 6 and it’s not over until the last cannoli is gone.” (laughs)

It’s gonna be a lot of fun and a huge celebration. It’s about remembering these people who influenced my life before the restaurant and while I’ve been here.

If These Walls Could Sing

All Tickets $125  (Include the lavish buffet, the fabulous show
and a signed copy of Chef Sal’s best-selling cookbook.)