According to a 2013 article in Psychology Today, the winter cycle helps us “chill out, mindfully step back, and look closely…at where you have been, where you are at the moment, and where you want to be in the future.”

So, instead of confining yourself to your apartment while binge-watching Fuller House and scarfing frozen, microwaved meals from Trader Joe’s, come to New World Stages on Tuesday, Feb. 27th. Here, you’ll kindle your creativity at TEDxBroadway.

For the 7th consecutive year, shapeshifters and shakers within the theatre community will gather to help answer the question, “What is the best that Broadway can be?”

“Of course, there really isn’t a definitive answer to the question,” says Jim McCarthy, TEDxBroadway Co-Founder and CEO of Goldstar. “But, by exploring the great ideas these speakers share we know we’re sparking discussions, igniting other ideas and creating new realizing possibilities to achieve that goal.”

Recently, TEDx Broadway organizers announced the complete list of speakers. They include:

Shakina Nayfack plays Lola on the Hulu comedy series Difficult People and is the Founding Artistic Director of Musical Theatre Factory, where she has supported the development of over 100 new musicals, including an autobiographical rock musical about her gender confirmation, Manifest Pussy.

Michael Riedel is the theater columnist for The New York Post and host of On the Town with Michael Riedel on AM 970. His New York Times best-selling book, Razzle Dazzle: The Battle for Broadway, won the Marfield Prize for non-fiction writing about the arts in 2016. Michael is a frequent guest on Imus in the Morning, The Mark Simone Show on WOR and The Tom Shillue Show on Fox News Radio. He’s at work on a sequel to Razzle Dazzle.

Shaina Taub is a New York-based songwriter and performer. Winner of a Jonathan Larson Grant and Ars Nova’s 2012 Composer-in-Residence, she made her Lincoln Center solo concert debut in their 2015 American Songbook series and is currently an artist-in-residence at Joe’s Pub.

David Yazbek’s varied career as a recording artist, Emmy-winning TV and film writer, music producer, and pianist has led him to become one of Broadway’s preeminent composer/lyricists. His three shows, The Full Monty, Dirty Rotten Scoundrels and Women on the Verge of a Nervous Breakdown, have all been nominated for Best Score Tony Awards. He’s also received 3 Grammy nominations and a Drama Desk Award. His most recent musical, The Band’s Visit, was a sold-out hit Off-Broadway last year and is currently is currently enjoying an open-ended, critically acclaimed run at Broadway’s Ethel Barrymore Theatre.

Jim Joseph is currently the Theatre Manager at the Samuel J. Friedman Theatre, the Broadway home of Manhattan Theatre Club.

Melissa Anelli is the CEO of Mischief Management and Co-Founder of BroadwayCon. She wrote The New York Times-bestselling book, Harry, A History: The true story of a boy wizard, his fans, and life inside the Harry Potter phenomenon, which featured a foreword from J.K. Rowling.

Karen Brooks Hopkins was BAM’s president (where she worked since 1979) from 1999 until her retirement in June 2015. She is the author of the widely read book, Successful Fundraising for Arts & Cultural Organizations.

Ryan Chang is the founder of the academic services company, Ivy Consulting Group, and restoration artists, Residential Arts Group. He is a member of the Broadway League, serves on the Board of Directors for Broadway for All, and works as an executive producer on theater and film projects. 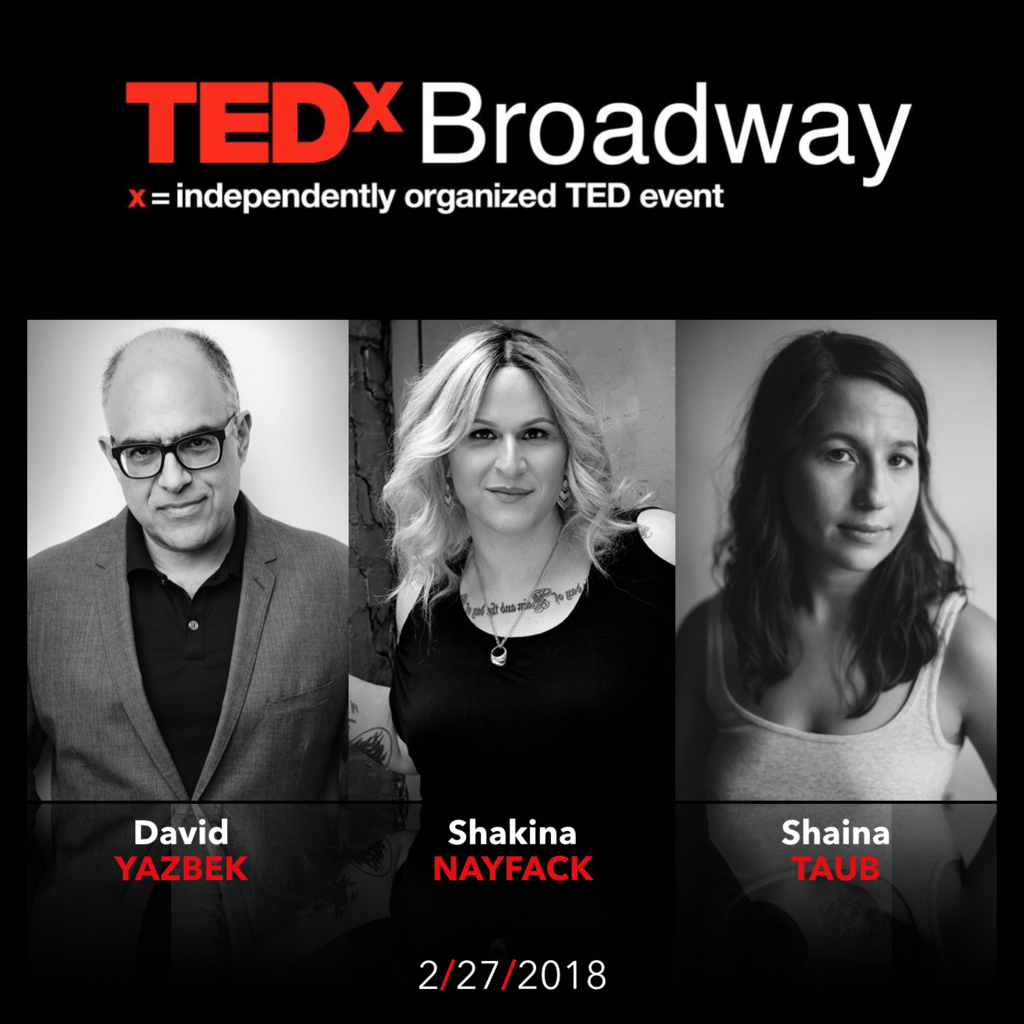 “A big part of planning this year’s event was tapping into this TEDxBroadway community we’ve built over the last six years,” adds Damian Bazadona, TEDxBroadway Co-Organizer and founder of Situation Interactive. “Their commitment to this — whether it’s introducing new ideas, suggesting speakers, offering sponsorships or just genuinely being ready to talk about the future — tells us we’re on the right track.”

Once again, organizers will welcome 58 young people (30 years old or under) to the convening as part of the Young Professional and Student program. The initiative allows them to network and voice opinions and insights.

“There’s an undeniable buzz that comes from the balcony at the event,” adds Bazadona. “It’s the Young Professionals and Students sharing their thoughts, ideas, and enthusiasm. We’re so grateful to have them there and hear about what’s important to them.”