You are here: Home / ENTERTAINMENT / A Slave, a Plant, Bohemians, and a Revolution: Fringe 2018 Musical Round-Up

No matter how many depictions of slavery we witness on stage or screen, they always compel. The physical, mental, and spiritual endurance required to sustain such cruelty is a testament to the human spirit. That spirit is on full display at the Edinburgh Fringe Festival in a musical based on the life of Henry “Box” Brown.

Brown was a Virginia tobacco slave who married a fellow slave, Nancy. Although they had three children, their union was never recognized. Eventually, the family was separated by plantation owners. At 33, Brown literally sent himself to freedom to Philadelphia. With the help of two other men, Brown packed himself in a wooden box marked as dry goods. It measured  3 feet long by two feet wide and was shipped from Richmond. It was transported by numerous methods (train, ship, and wagon) and took 27 hours.

It almost seems too impossible to be true but historical records prove the accuracy. After his freedom, Brown had to cross the Atlantic to Europe to avoid detection. Recently, the cast learned that he had performed his own show in Scotland in 1852-a cool bit of trivia which adds a supernatural-like blessing to the piece.

The 90-minute musical boasts a large cast and is performed in conjunction with Children’s Theatre Company New York and New York’s Christian Cultural Center. At times, book writer Mehr Mansuri seems a bit too formulaic and cookie-cutter with her storytelling. With more realistic dialogue, it could pack an even greater punch. Songwriters Frank Sanchez, John Lenz, Eric Dozier, and Sam Urdang have contributed some beautifully touching, deeply soulful music here. What truly makes Henry Box Brown soar is director Ben Harvey’s cast who reenact every moment with conviction and heart. It doesn’t hurt that they all they have A+ voices either.

At the core of Henry “Box” Brown is the notion that hearts can be changed. Wrongs can’t always be made right, but forgiveness is available to those who have admitted their mistakes.

Captivate Theatre, an Edinburgh based company returns to the Fringe with their annual production of Les Miserables. The show is, by nature, a technical and staging challenge. Yet Director Sally Lyall and music director Tommie Travers have managed to make this a celestial experience. With a cast of over 30 high school students and minimal but effective stage design, this phenomenal group had audiences leaping to their feet at the end.

The sweeping tale follows Jean Valjean and his quest to escape the grips of draconian Inspector Javert. In the midst, there is love, loss, death, war, theft, and ultimately redemption. Given the heft of material, it might be a good idea for newcomers of the story to read a synopsis. Even in fully staged professional productions, it can be a bit confusing since it glides through places and time frames.

As I sat watching, it was initially difficult to buy into the idea that these young adults were French Revolutionaries fighting a war. It then occurred to me that many of those serving in the armed forces from all parts of the world were not much older than these students. Knowing that those real life brave soldiers sacrificed their own lives made this version all the more potent.

The Fringe has nearly ended, but let’s hope that Lyall has the good wisdom to bring Alain Boubil and Claude Michel-Schonberg’s epic, well-loved musical back again and again. I’ve seen over 15 shows in the week I’ve been at the Fringe and this has been a major highlight.

Captivate didn’t quite stage a winner with their production of Jonathan Larson‘s 1996 mega-smash hit musical, Rent. Based on Giacomo Puccini‘s La Boheme, it traces the lives of Bohemians squatting in New York’s Alphabet City during the rise of AIDS. 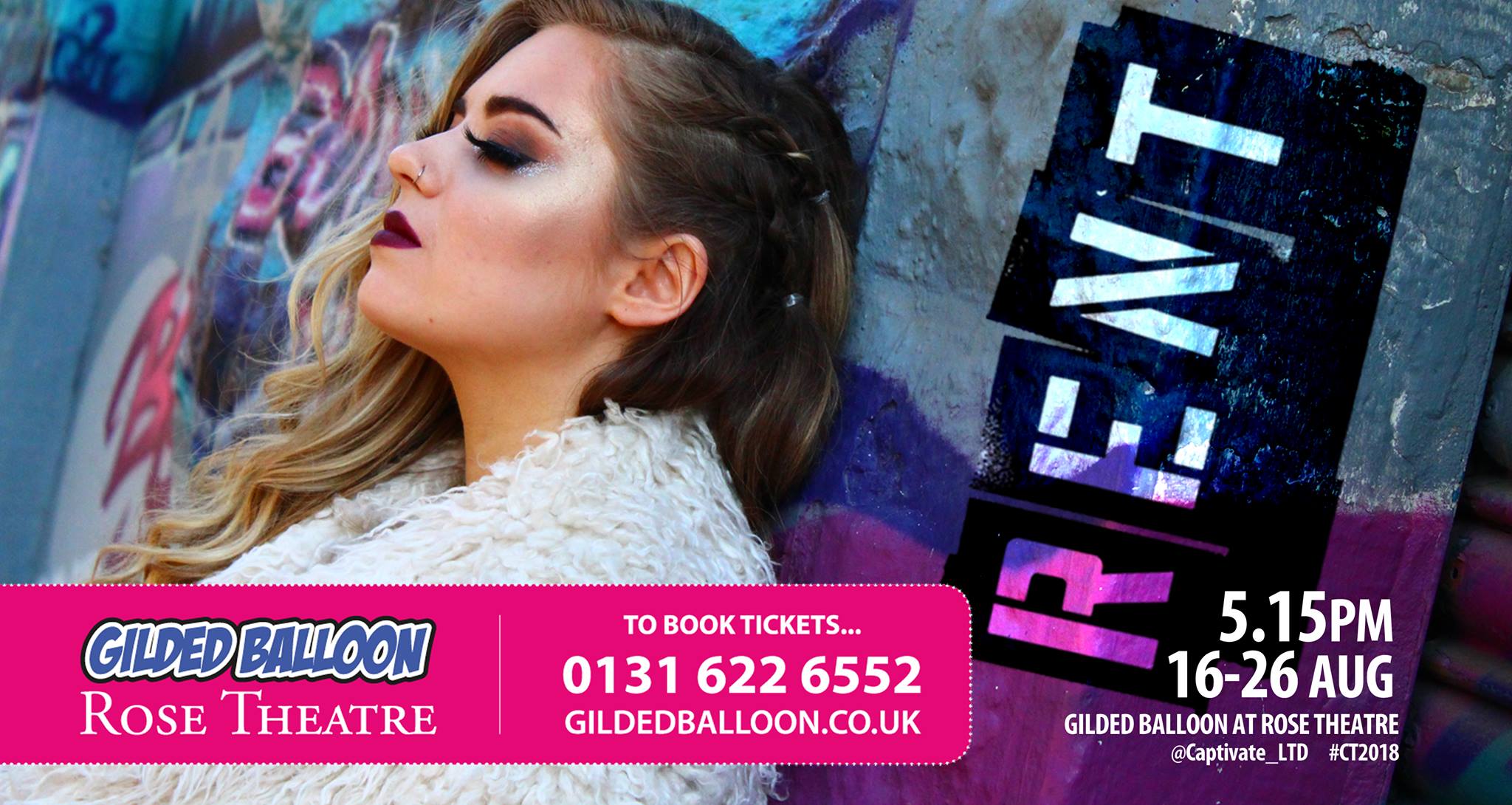 What made Larson’s show so ground-breaking was it’s raw, unrelenting emotion as well as it diverse cast which helped launch the careers of Idina Menzel, Taye Diggs, Jesse L. Martin, and Daphne Rubin-Vega.

Here, every major cast member is caucasian. They all sing well, but they do so with such propriety and restraint that it’s difficult to conceive that they are actually struggling bohemians coping with disease and drug abuse.  Consequently, the show feels more rote than riveting.

Audrey II may be a carnivorous shrub seeking world domination, but audiences still flock to see this “strange and interesting new plant.”  Based on the b-movie by Roger Corman, it was later adapted to an off-off-Broadway musical in 1982 by lyricist Howard Ashman and composer Alan Menken.   The smash hit then moved to Off Broadway’s Orpheum theatre in New York’s East Village where it ran for five years. In 1986, it hit the big screen.

Musical theater fans can’t get enough of it. Currently, it’s on display at the Edinburgh Fringe Festival in a fun production by Delicious Theatre, a troupe of University of Manchester Graduates. 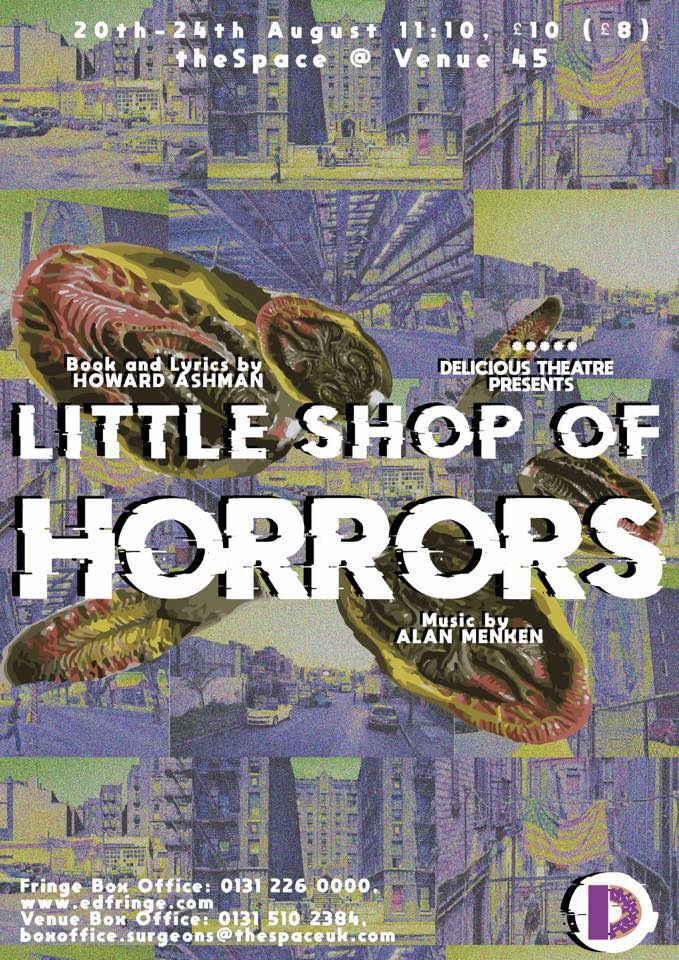 Their interpretation proves that a great ensemble  and compact storytelling supersede elaborate sets and costumes. It’s also a testament to the enduring power of Ashman and Menken’s talent.

Seymour and Audrey find love as co-workers in Mushnik’s flower shop, a “God and customer forsaken” place on skid row. After Seymour discovers a new breed of plant and displays it in the window, customers flock, and business booms. The only problem is that the plant, who he names “Audrey II” is a man-eating plant that will soon consume everyone in his wake.

This cast is strong. Audrey II, played by a stocky brit bloke in drag is especially wonderful. He’s both visually and vocally impressive. Seymour, Audrey, and Mushnik are also well cast. One only wishes that the Ronettes, a Supreme’s like group who propel the story in Greek chorus form weren’t quite so lilly white. Fine as they were, it’s a shame that they were not women of color. Although that population is statistically quite low in Manchester, they do exist.

As a long time fan of the show who has seen numerous productions, this one was sturdy and thoroughly enjoyable.

*This review is part of Manhattan Digest’s continuous coverage of the Edinburgh Fringe Festival in Scotland. Stay tuned for more reviews through this week!