The Elephant in the Garden: Air raids are happening and the zoo animals in Dresden, Germany are being killed-except for Marlene–Lizzie’s elephant named for the great actress and singer. Young Lizzie, her mother, and the massive mammal flee the city by foot, seeking solace in a refugee camp. Along the way, they meet a Canadian air pilot named Peter, other refugees, and soldiers.

Michael Morpurgo‘s book is adapted for the stage by Simon Reade in one of the most concise and touching solo show’s I’ve seen in quite some time.

Alison Reid captures each character with perfection. Not a shred of artifice can be seen here. She even embodies the lumbering elephant. Her sensitivity to the material is especially resonant in a time when refugees make daily headlines around the world.  Morpurgo’s work is based on some truths. It’s difficult to determine what is fact-based and what has been elaborated for dramatic purposes. It doesn’t matter. Whether Lizzie’s story is 100 percent true or not, we are well aware that many shared similar stories in their attempts to escape to freedom.

Hands down, this has been a shining star among the crowded constellation of shows at the Fringe. It’s an understated one that will stay with audiences long after the festival ends.

Roman Fraden: Back in the Closet: On the totally opposite end of the spectrum of quality is an inexplicably horrendous solo show from 1992 figure skating champion Roman Fraden.

Fraden’s poster is compelling and its synopsis led me to believe that I would be laughing with fits of hysteria. Instead, I was shuffled to the front row of Gilden Balloon’s balcony stage and sat staring for almost 60 minutes in stunned disbelief.

It all made sense after Fraden spoke of using psychedelic drugs and getting stoned before the show. His glassy eyes were an immediate giveaway. Had that not been a sure sign, his disconnected dialogue and unfunny humor would have been. 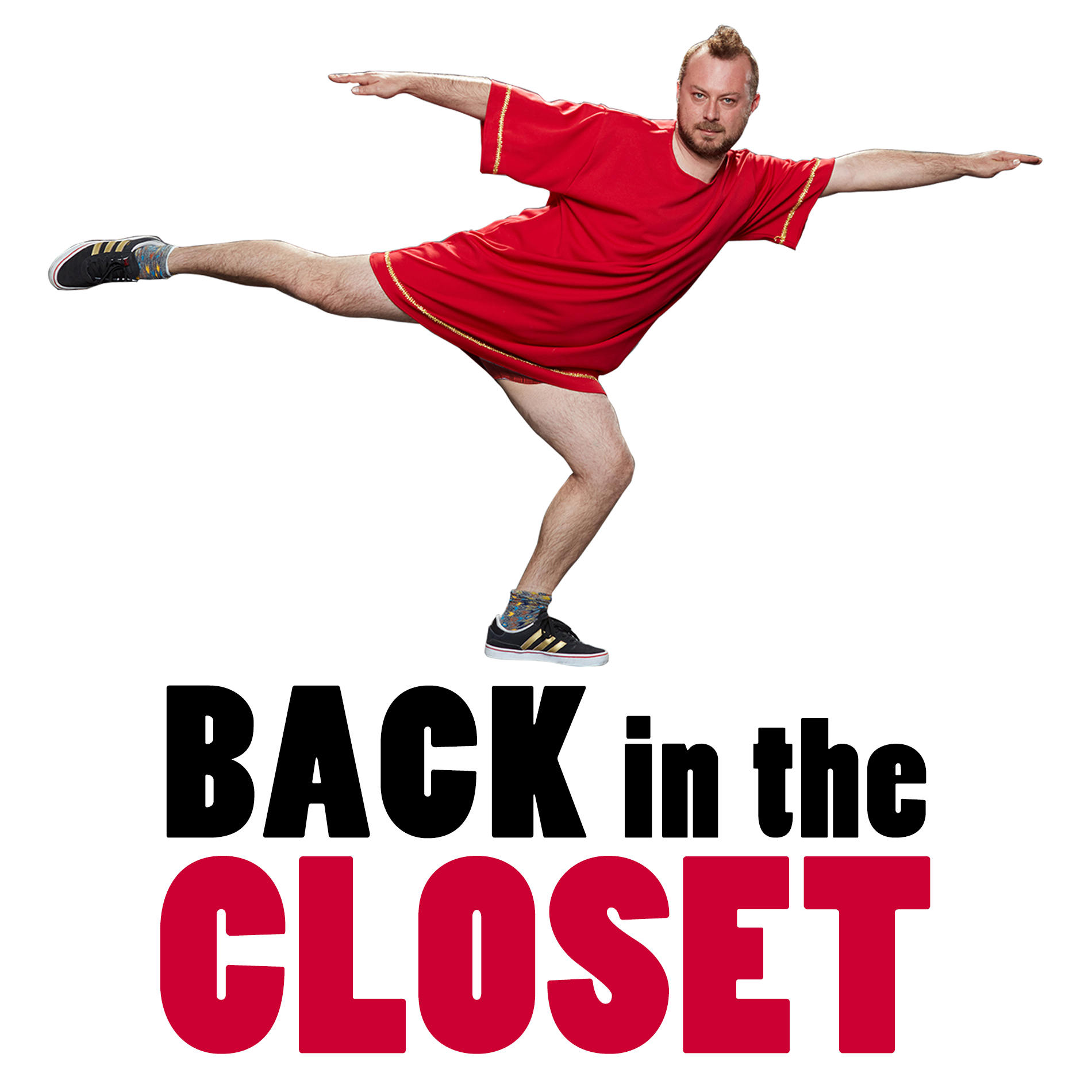 Fraden discusses some brushes with fame, his experiences on Grindr and craigslist, and other deeply sexual stories. Few of them offer a point or punchline.

Solo performance is one of the most difficult forms of entertainment and I recognize the vulnerability it takes to do it. Fraden seems like a perfectly pleasant guy to grab a beer with, but when it comes to holding an audience, this rink has melted to water.

For more information visit Back in the Closet.

Margaret Thatcher: Queen of Soho: If you’re wondering what happened what happened to England’s most controversial politician after she stepped down as Prime Minister in 1990, you can find her at the Edinburgh Fringe in her own cabaret act.

Matt Tedford writes and stars in this 3 person show which chronicles Section 28, legislation that passed under Thatcher’s reign in1988. The bill forced the removal of any LBGT literature in public schools and was deemed homophobic by activist groups. Tedford takes delicious delight in rewriting history, turning the Baroness into a gay-friendly figure. Meanwhile, her dead idol, Winston Churchill appears as a painting who comes to life and reveals that he was a poof.

As an American with little knowledge of Section 28, I was still hugely amused by this show. Tedford’s comic timing, costume,  and facial expressions are impeccable. Often times, he reminded me of Dana Carvey’s uptight Church Lady from Saturday Night Live. Tedford is a true pro, assisted by two other comedians who play several roles.  This show has been performed several times and yet every moment feels fresh.

A note of caution: If you plan to leave Maggie’s cabaret early and she sees you, you will be called out! “There are no bathroom breaks in this show!” she said as a couple ran for the door at a recent performance. “We’re leaving,” they replied. “Oh, well then…F— off!” she quipped. As they walked out the door she turned back to the audience. “Probably members of the Theresa May fan club…all two of them!”  Iron is a droll element.

Don’t Tell Me Not to Fly: Ria Jones: Underbelly productions gave Fringe-goers a real treat at McEwan Hall in Bristo Square. Over the 3 week festival, they invited West End’s leading ladies the chance to shine in the Edinburgh Spotlight. Janie Dee kicked it off, followed by Claire Sweeney and later by Danielle Hope.

I had the good fortune to catch Ria Jones, who appeared in Cats, Evita, Nine, A Little Night Music, and Sunset Boulevard. I was first introduced to this class act in New York City on Fran Drescher’s Cancer Benefit Cruise. So it came as little surprise when she invoked Liz Callaway‘s name. Callaway was also on that cruise. Both have appeared in the same shows at different times and are friends. Callaway, both a performer and songwriter, wrote an original song for Jones called “Mind the Gap,” a smart song about the gender pay gap.

The conceit of Jones show is truly unique. a voice from the audience tells us that 10 questions will be asked. Jones will then respond with a song that fits the inquiry. It was slightly reminiscent of the banter between Zak and Cassie in A Chorus Line.

The best moment came when she was asked, “If you could do any other job, what would it be?” After discussing her fight with cancer and acknowledging the staff at the NHS (UK’s National Health Service), she replied, “A surgeon. They are the real heroes.” She then sang,  “Here’s to the Heroes” from the movie Dances with Wolves.

Jones also expressed her admiration to Queen Elizabeth in an unusual, but effective mash-up of Carly Simon’s “Nobody Does it Better” and Queen’s “Don’t Stop Me Now.” This in response to the question, “Which woman do you most admire?” 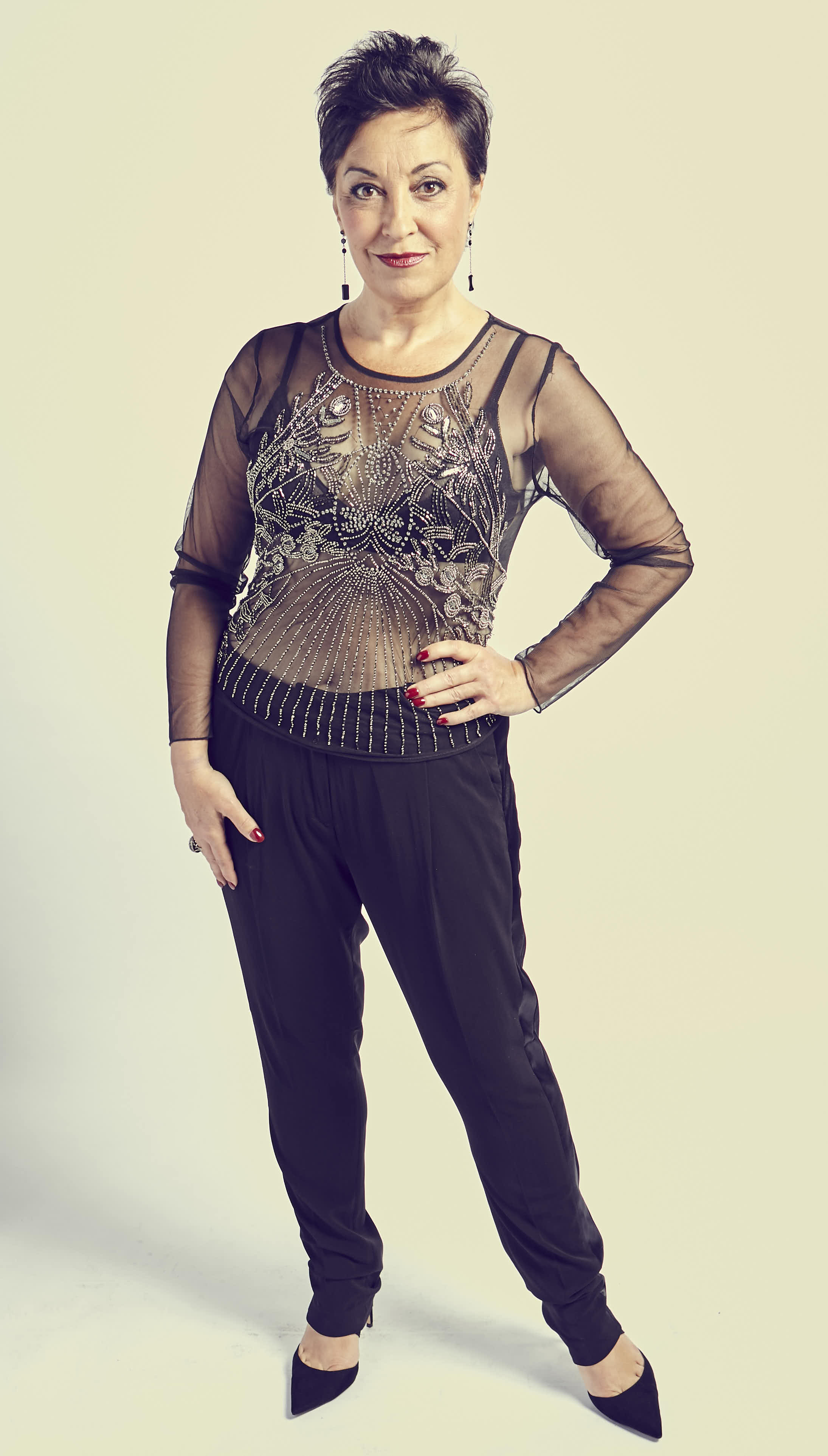 “Which woman would you like to see on British Banknotes?” the voice inquired. “Victoria Wood,” she concluded.  The late comedian who wrote the BBC television show turned musical Acorn Antiques was a friend to Jones.  In her memory, Jones performed the comical piece “Macaroons” from the show.

Jones is a rare treasure. Her voice, stage presence, and genuine joy of entertaining are not replicated by younger performers today.  It helps that she has a first-rate group of ladies behind her who bring this show to life: Stellar pianist and music director Lindy Tennent-Brown, Director Kate Galledge who guides Jones with gentleness and soul, Helen Eastman, writer of her fine material and Caroline Humphris as her musical supervisor. Mikaela Liakata and Anna Sbokou round out the technical aspects as video and lighting designer. The visually appealing  projections at the top of each question are worthy of their own exhibition.  Ria’s riveters have undeniably put creative muscle behind the scenes to make their leading lady shine.

Jones is a force, but her graciousness and kindness to her fans is obvious.  She admitted to being a virgin at the Fringe festival, but when it comes to commanding a stage, she is a flawless professional.  Though not old, she is “old school” in every way.  The biggest question I had after this thoroughly entertaining hour was, “Ria, when can you come to New York?”

For more information on Ria Jones, visit her website.

*This review is part of Manhattan Digest’s continuous coverage of the Edinburgh Fringe Festival in Scotland. Stay tuned for more reviews through this week!