Fisherman’s Tale:Even die-hard churchgoers can admit that reading the Holy Bible can be a heavy lift. The stories may be relevant, but they are often enmeshed with a great deal of historical, genealogical and geographical information which leave the reader dozing off or daydreaming.

Thank God for Rob Holman and his merry band of music makers. His group of 4 men and 1 lady form the cast for Fisherman’s Tail, a wonderful story that chronicles the life of Jesus and his disciples:  Simon, Andrew, James, and John. The show recently played an extensive run at the Edinburgh Fringe Festival.

Marketing posters cite that the show is “Joseph and the Amazing Technicolor Dreamcoat but with instruments and lobster pots.” Presumably, they are banking on the  UK recognition of Sir Andrew Lloyd Webber. I would argue that the show is more akin to American writer Stephen Schwartz‘s Godspell, as much of the dialogue is contemporized and the action is a fast-paced pantomime.

Either way, Holman’s family-friendly tale, derived primarily from the New Testament book of John is completely unique and filled with fantastic songs which move the story forward. Several musical instruments are played with absolute ease from this ridiculously talented cast including the bodhran, accordion, penny whistle, upright bass, fiddle, guitar, and cajon. Even more appealing was their pre-show entertainment, performed in the windows of their church where people on the street can be intrigued.

The no-frills set and minimal props make this a perfect ministry tool for touring. Would that this crew set sail for New York City, I’d gladly jump aboard their inspirational ship again.

Break Free:This Japanese break dance show has the look and polish of a commercial installation. It’s no surprise, given that the Tokyo based Wasabeats has already appeared on America’s Got Talent. 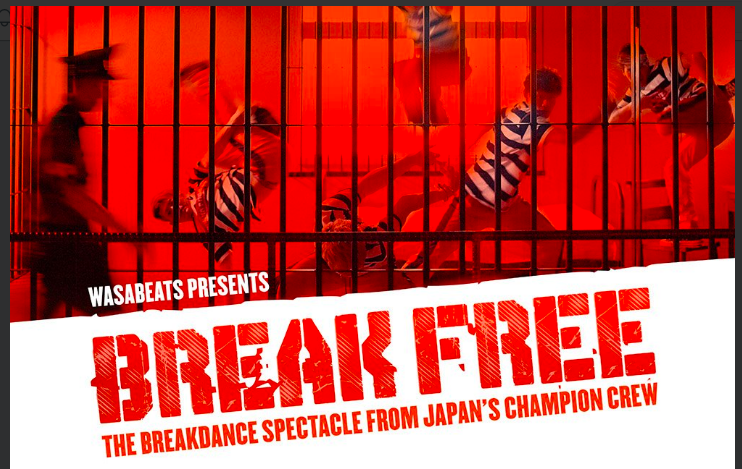 Still, they are a feat to behold in their one hour show, Break Free. With the help of deftly designed projections, this group of six managed to capture the audience’s attention without saying a single word.

The loose plot spins around an Officer Krupke like character, who is intent on enforcing the city’s “no dancing” rule. Using their imagination, the remaining five set out to use other tools in which they can find their rhythm. This still fails and they end up in prison, where they jump, spin, beatbox, and jive.

The stamina required to pull off this show is astounding. Still, this agile group managed to pull it off daily from August 1-27th. Their appearance in Edinburgh marked the European Premiere of Break Free.  Undeniably, this is a tight-knit troupe and their trust in each other makes the show all the more compelling and taut.

The wonderfully macabre show by this Canadian troupe runs the gamut of emotions in 60 minutes. While mostly a comedy, it manages to challenge one’s own mortality and find beauty in a peaceful death.

Nathaniel Tweak serves as our cantankerous but endearing host for the evening. Resembling a gaunt Albert Einstein, he pops up after every few scenes to ask us insightful questions about death. It sounds bleak, but it’s actually one hell of a good time.  Various scenes depict accidental and intentional shootings, monster attacks, drownings, and good old-fashioned thumps on the head.

Each scene and puppet is a detailed work of art. In many ways, it recalls the equally dark Shockheaded Peter, the 1998 musical based on the German book, Struwwelpeter. There, misbehaved children meet cruel fates. That too was a bloody beautiful feast for the eyes.

Old Trout has already brought this show stateside at Wooly Mammoth Theatre in Washington, D.C. That was in 2014, however. Isn’t it time we make America dead again?

*This review is part of Manhattan Digest’s continuous coverage of the Edinburgh Fringe Festival in Scotland. Stay tuned for the final installment of reviews!