There is much to admire in Legacy: A Mother’s Song. Finn Anderson has assumed the challenge of wearing all three hats–book writer, lyricist, and composer. With his director, Tania Azevedo, the pair created this cross-generational story about how those who have gone before us shape us into who we are today. Philosophically, it poses contemplative questions, the greatest of which is the choice to conceive offspring and what they might impart to their own children.

In this time travel piece, three different women are interconnected by their maternal characteristics. Through letters, recordings, and songs, they pass down their traditions and wisdom to the next generation. There is a great deal of complexity here. Between the large cast and flashbacks from past to present, it could easily become muddied and confusing. Yet Anderson deliberately and concisely brings his story together. One only wishes he would avoid the overly used trope of the uptight, emotionally distant New Yorker trying to ignore her feelings and family.

The production is a collaboration between the American Music Theatre Project (Northwestern University) and the Royal Conservatoire of Scotland. Students from both sides of the pond came together for this commissioned work. With that, one would expect some stand-out performances. Sadly, there are none here. Collectively, the cast has great chemistry. As individual performers, however, each is merely serviceable.  Musically, the show offers some fine songs, many of which draw from a variety of styles including bluegrass and Celtic.

Likely,  the piece has been designed for licensed use by other universities and theater troupes.  With minor tweaks to the script, Anderson and Azevedo will have created a lovely tribute to motherhood.

The relationship of mothers and daughters is played with great sensitivity and pathos in the two hander musical Sparks by Jessica Butcher. Butcher, who also stars in the show, has approaced the grief process in a clinical manner by exploring how the brain reacts to loss.

When it first began, I was admittedly skeptical. I was certain that the story was not much more than the story of a young girl looking for love. But Butcher’s story takes a heart-wrenching turn and by the end of the 60 minutes, it’s impossible not be moved. 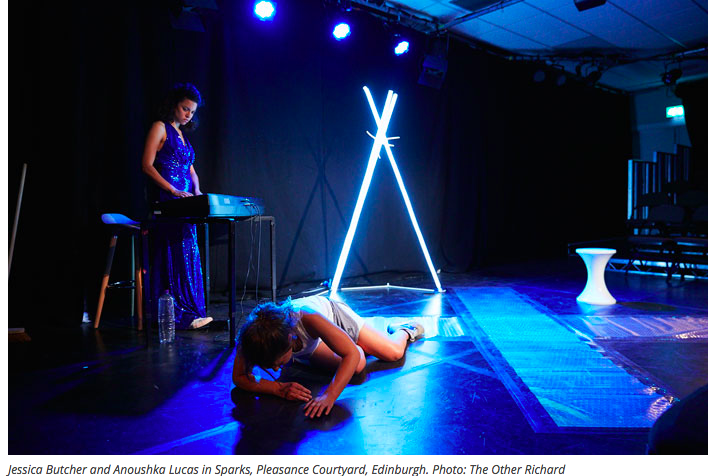 In Sparks, two actors portray the same person. Butcher speaks her thoughts while Anoushka Lucas (who provides the excellent original music)  sings them. Lucas, by the way, has the voice and presence of an angel. Hers is a talent that makes one sit up and take notice. Butcher is also a thoroughly engaging performer as she navigates her journey like a tightrope act. At times, she is carefree and effervescent. In other moments, she has buckled to life’s crushing blows. In those moments, Lucas relays the thoughts for her. Under Jessica Edwards‘ clean direction, the pair provides a truly touching piece of theatre.

Should Butcher and Lucas continue to collaborate–or even perform individually– audiences will reap the rewards. Both are naturally born storytellers, capable of turning sparks into full-fledged fireworks.