You are here: Home / ENTERTAINMENT / An Interview: Christine Andreas Has No Regrets About Edith Piaf

Christine Andreas is going to kill you. At least that’s what is written on her website by NY Times Reviewer Stephen Holden. Of Andreas, he  writes that “she delicately kills with the sheer beauty of her voice.” He’s not wrong. The New Jersey native has recently released a brand new recording entitled Piaf: No Regrets. The album, recorded with a 36 piece orchestra,  coincides with live performances of her show, which Andreas based on the book No Regrets: The Life of Edith Piaf by Carolyn Burke. Her husband, Grammy-nominated composer Martin Silvestri accompanies her  on the piano and accordian on the album  In October, she took the show to London’s Pheasantry and brought it to New Yorkers last month. This past weekend, San Francisco audiences were treated to this exquisite piece at The famed Venetian Room.

Manhattan Digest caught the November 10th performance at Midtown’s posh hotspot, 54 Below and phoned the artist a few days later to discuss her love of Piaf, her life philosophies, and her surprising void of gay groupies.

MD: Was there a difference in audience reactions between London and NYC?

CA: I didn’t think of it much before I went, but there was a freshness to the reaction in NYC because I think they either hadn’t heard Edith Piaf before or hadn’t heard her in so long. It was thunderous here in NYC.

MD: Your French sounded great to me. Although I know nothing past “baguette.” Still, it seemed so authentic. Did you learn the language for this album?

CA: (Replies in a fancy French phrase that still eludes this dumb American). I’ve always loved the language and I’ve always had a lot of Parisian friends. I coached with them. I also have a good ear. Our mouths are a lot lazier than French because they have agile muscles in their mouths and make sounds that we don’t. I’m not trying to be French or be her. I’m just trying to honor enough of the music and the language and the truth about her life and let it just flow through me. I do another show about Piaf called Street Singer with a dance troupe called Rioult Dance NY.  The founder, Pascal Rioult is a Martha Graham soloists and he is Parisian French. When I first met him and he asked me to be a part of his show I said, “I don’t really speak French.” He said, “I know I saw you on youtube.”  (laughs). But I’ve heard French people tell me that my French is charming.

MD: Will you be performing Street Singer in New York?

CA: I don’t know. They’re trying to. We did it at a theatre on 42nd street a few years ago, but I hope we do it again. It’s really a lovely piece.

MD: What was the turning point that made you focus your efforts on Piaf?

CA: I have very pushy friends!  One, in particular, is a French Canadian band leader on Crystal Cruise lines. I do several cruises each year and told me to do a show on Piaf. I kept putting him off because I knew it would be a lot of work to learn English and French. Finally, I relented. He helped me. Then, Pascal pushed me to do it. Finally, Piaf herself really stayed in my consciousness. She kind of haunted me. I feel that we’re so dulled to tragedy and Piaf had so many of them in her life.  There is no way I can know what it’s like to be raised in a ghetto with rats and thugs but I love letting it fill me up and being in that world a bit.

MD: You mentioned that in the show. Do you feel as though you have an ongoing psychic relationship with her?

CA: Well, that sounds a little weird, but let’s just say that I think she’s onboard. The anniversary of her death was Oct. 10th and I could feel her all around me.  I ’ve had this experience with loved ones when they passed and I like the idea that there is a thin veil between those energies. I’m going out to do the show at the Venetian Room in San Francisco and Piaf played that room. But she’s not haunting me that night. Forget about it! 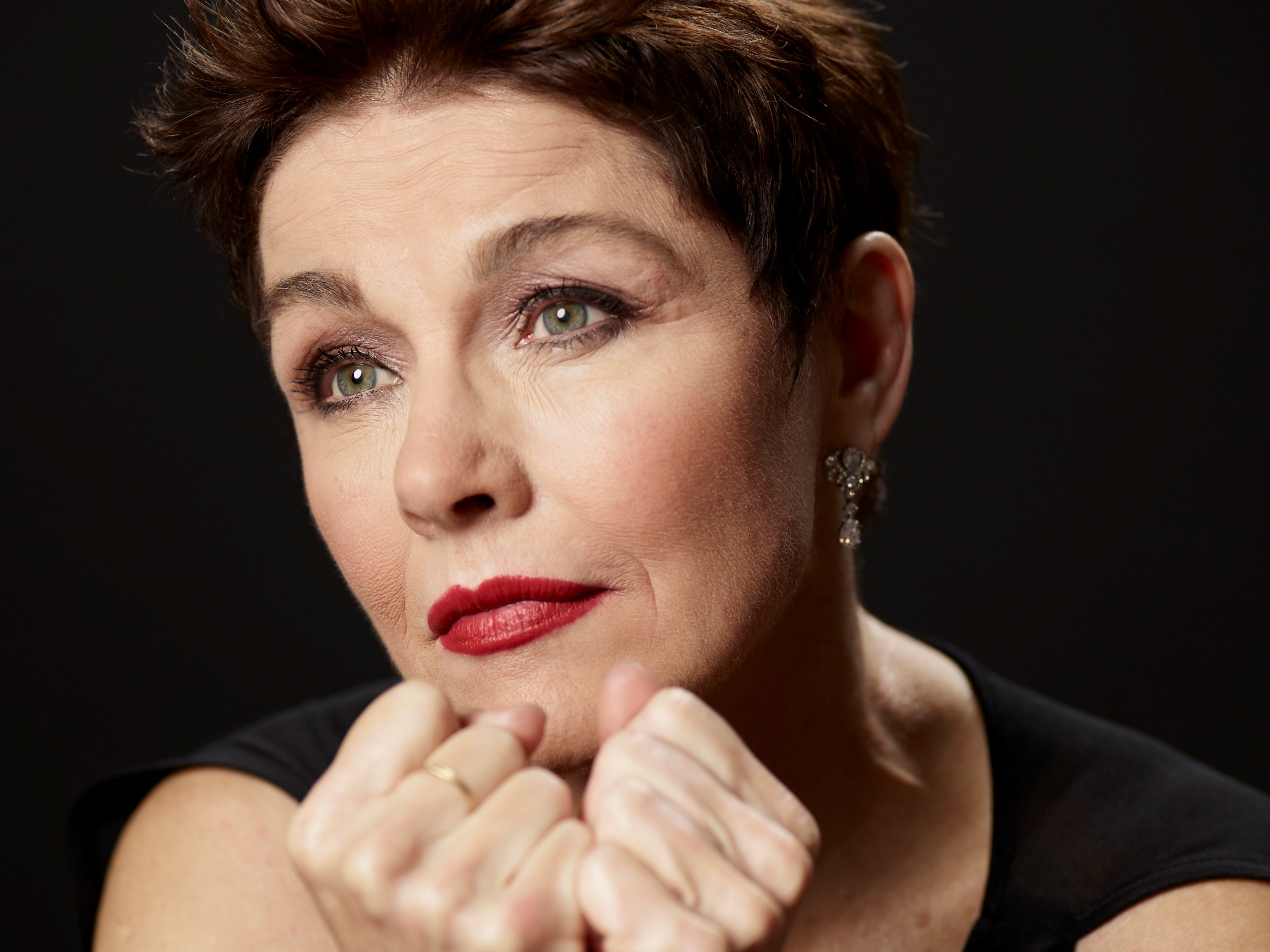 MD: I lived in San Francisco for a year and told dear friends of mine who live there –a gay couple– that they need to see your show!

CA: (Humorously) I don’t have a gay following. Would you help me out here? Shouldn’t it be me?  I know that Betty Buckley and Patti LuPone do, but I’m not aware of any gay following that I have and  I feel orphaned! I really want to do some benefits for the gay community. I have to make some inroads. I have such a cultivated sense of beauty. It’s my birthright. I see beauty everywhere. My heightened sense of beauty should give me an eternal pass into the gay world. I love my gay friends! I love their heightened sense of beauty and purity and balance and receptivity. They have all the feminine aspects as well as a strong masculine sense. I so appreciate that. I have special needs kids who is so aesthetic. The world is almost too gross for him with his sense of beauty. So it’s all around me and it’s what provokes me. I’m a triple Libra! I have no choice

MD: Well, I’m gonna have to lobby someone. We will have the “First Annual Christine Andreas Gay Appreciation Day!”

CA: Well, it doesn’t have to be too grand. I’m not a diva. I’m trying to be a little humbler than that.

MD: (Laughs) We’ll just sit around, drinks cosmopolitans all day and listen to you sing Piaf!

CA: (laughs). I just learned that my album is an Amazon choice! How does that happen? I’ve never been anyone’s choice. Isn’t that cool? My gay friend told me this. See, you guys know everything!

MD: Well, we are the trendsetters of the world.   How did you whittle down her entire songbook?

CA: Well, I picked the biggies–and I loved picking songs that my husband–who is also a concert accordionist–could play. He hits that accordion with such life-force. He’s the real deal. I knew  I had to do a few tunes in English, too.

MD: I interviewed Philip Chaffin, one of the co-founders of PS Classics who produced this album. He sang your praises and told me that he only works with nice people. He was not wrong.

CA: Awww! Thanks. Yeah…I’m pretty nice. You do wonder why–if someone is out there in a big way and they are difficult–why they don’t lighten up. Don’t they know they are loved and what they do is appreciated? It is always sad when you see that. There is an element of humility in a true artist. You can always go deeper into a song or lyric or show. It’s never finished. I read that true spirituality is your ability to live in a mystery and I thought that it was so profound. We don’t have to know. We just have to desire the clearest connection to the truth that we can. Having an autistic son has really made me aware of that. He can’t tell me what’s wrong or why he’s unhappy. I have to intuit it. He came into my life to make me understand that there is no such thing as perfect. As a younger artist, I tried to be so fuckin’ perfect. It was so painful. You just live always feeling lack. Then, God gave me this kid and I loved something so deeply for the first time. A whole new life began for me.  Some people wonder why I’m not better known than I am. But, it just freaked me out to be that public. I wasn’t ready for it. Once you get there and everybody is shining a light on you, you better be comfortable in that light. I kept deflecting it. Now, I do what I do but I do it at a level on my own terms. I’m proud of the level I do things on and have people in my life who enable that. At first, I had resistance to doing this Piaf piece, but once I saw it put before me, I had no more resistance. Resistance is a big metaphysical reasoning for why things do and don’t work. If something keeps popping up, you have to look at why you’re resistant.

MD: Well, you are bringing her life and her songs to a reality in such a rich way is so fantastic. You really are changing people’s lives.

CA: Thank you. Music does that. It really does a  healing thing in the brain. My son transforms listening to music. It makes him alive and buoyant.  People come up to me after the shows sometimes and they don’t know what to say. They don’t know what has happened to them. But, I think their hearts just open up. Maybe they had them shut down for a while. It happens to me too. No matter what’s going on my in my life–when I get on the stage–I surrender to the song. I usually end up feeling more aligned than I did before I started.  I did a show about Judy Garland’s last months but it was draining for me and it burned me out. I couldn’t do another show about her because her psyche didn’t want to heal. She didn’t want to be whole. But Piaf wasn’t like that. They both died at 47 and looked a wreck, but Piaf became an addict because she couldn’t bear the pain of arthritis- at least that’s what I gather from what I’ve read.  She literally  couldn’t perform without shooting herself up- just to get through a show

MD: What do you do to pep yourself up before a show?

CA: I don’t do that! (laughs). I do yoga, reflexology, I try to get the pains out of my body, take a lot of hot baths, and get a massage when I can. I think of myself as a bass fiddle so I like to get the fiddle tuned. I’m older now and things are creaking and cracking. I have to take more care, but I enjoy it. I don’t want my performance to be locked in. I want to be carried by the energy in the room. If I mess up, I don’t mind because I know that there is an alchemy in the room and my audience knows that I’ve been present with them. That’s much more fun!

MD: Thank you so much.  I look forward to seeing what’s down the road for you. and can’t wait to see you perform again in New York.

CA: Thank you. Every once in a while, check out www.christineandreas.com. I’ll be adding dates along the way.

To listen to a sample of Andreas,click here.