You are here: Home / LIFESTYLE / Here’s Why The Escape Game Provides Fun for Everyone

I ducked into The Escape Game after a VERY rainy walk on a Wednesday evening. At first, I was surprised at how open and professional The Escape Game is. The lobby is right off the street and well lit. You can see it from the street. You might think this is weird but sitting on a couch in what looks like a construction zone while waiting for the next escape game to get set up and hoping you don’t get tetanus is a common occurrence. We even checked in on a tablet and had a dedicated front desk person. This isn’t to say that other escape games aren’t good, but more that there’s a high-tech level and care that was obvious in the Escape Game from the get-go. 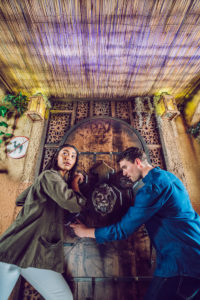 There are a few options in The Escape Game: Prison Break, The Heist, Gold Rush, Special Ops: Mysterious Market, and Playground. We went with Special Ops: Mysterious Market. The Escape Game website even has a 3D model of the room you’ll be in, but don’t worry, it didn’t give anything away. Walking in was something special. I had gathered a few newbies and a few veteran escape gamers to help me out (no really, the Escape Game employee running the room and my veteran friends got into a long discussion about other rooms they’ve done and liked and didn’t like and it was definitely a smile and nod situation). While we were all impressed, the well-seasoned gamers were raving about the room’s set up, even after we left. The attention to detail was incredible, and included lights, sounds, and even scents. We quickly forgot we were even in an escape room. The puzzles included a wide variety, which was great, since I’ve been in one too many “Everything is locked, and you have to just keep finding the combination to the combination lock” variety of rooms. We felt engaged and challenged, in addition to being fully immersed. I don’t want to spoil anything, but even the veterans were surprised by some of the puzzles we encountered. 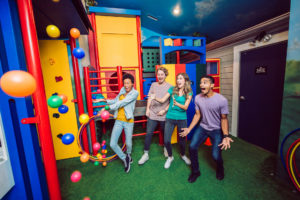 After we escaped (which, yeah! We did escape!), we got a quick peak at Playground, which looks incredible (And is exactly what it sounds like, and is perfect for anyone looking for a less ominous option of puzzle), and got a glimpse at the ad for Gold Rush, which if Mysterious Market is anything to judge by, I can’t imagine how cool Gold Rush would be (it looks like they built a cabin in the woods…in the escape room). I know I’ll be back to try both! 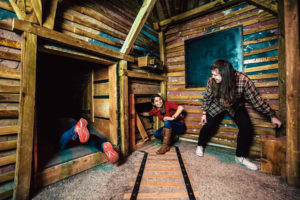 To book a game, which I highly recommend you do, please check out their webpage. The games are up to 8 players, and we fit comfortably with 5, and that’s with most of us being tall and/or bigger dudes. You can also contact them through their email. Special Ops is a great choice, but they have five incredible looking games to choose from so I don’t think you can go wrong!

More information on The Escape Game can be found here.