You are here: Home / uncategorized / Mary-Louise Parker & Will Hochman Shine in ‘The Sound Inside’

If you’re wanting a loud, splashy spectacle with all the substance of cotton candy, you won’t find it at Studio 54. If, however, you’re seeking a quiet and thoughtful play that gently reels you in for a compelling 90 minutes, you’ve come to the right place.

Director David Cromer is no stranger to subtlety. As he did Off-Broadway in Our Town, The Effect, and The Treasurer–and on Broadway in The Band’s Visit, he excels in mining the unspoken truths of human interaction. He’s doing the same with Adam Rapp‘s The Sound Inside.

Rapp’s two-hander explores the complex relationship between Bella Lee Baird (Mary-Louise Parker), a writing professor at Yale and her student, Christopher Dunn (Will Hochman). Baird, who has just received a diagnosis of stage 2 cancer is a bit of a loner. She rarely interacts with her colleagues and is not coping with her cancer treatment in a traditional manner. Will her audience be merciful and listen to what she has to say?  Baird toggles between narrating her story and acting in it. Trust me, you’ll want to listen to what she has to say. 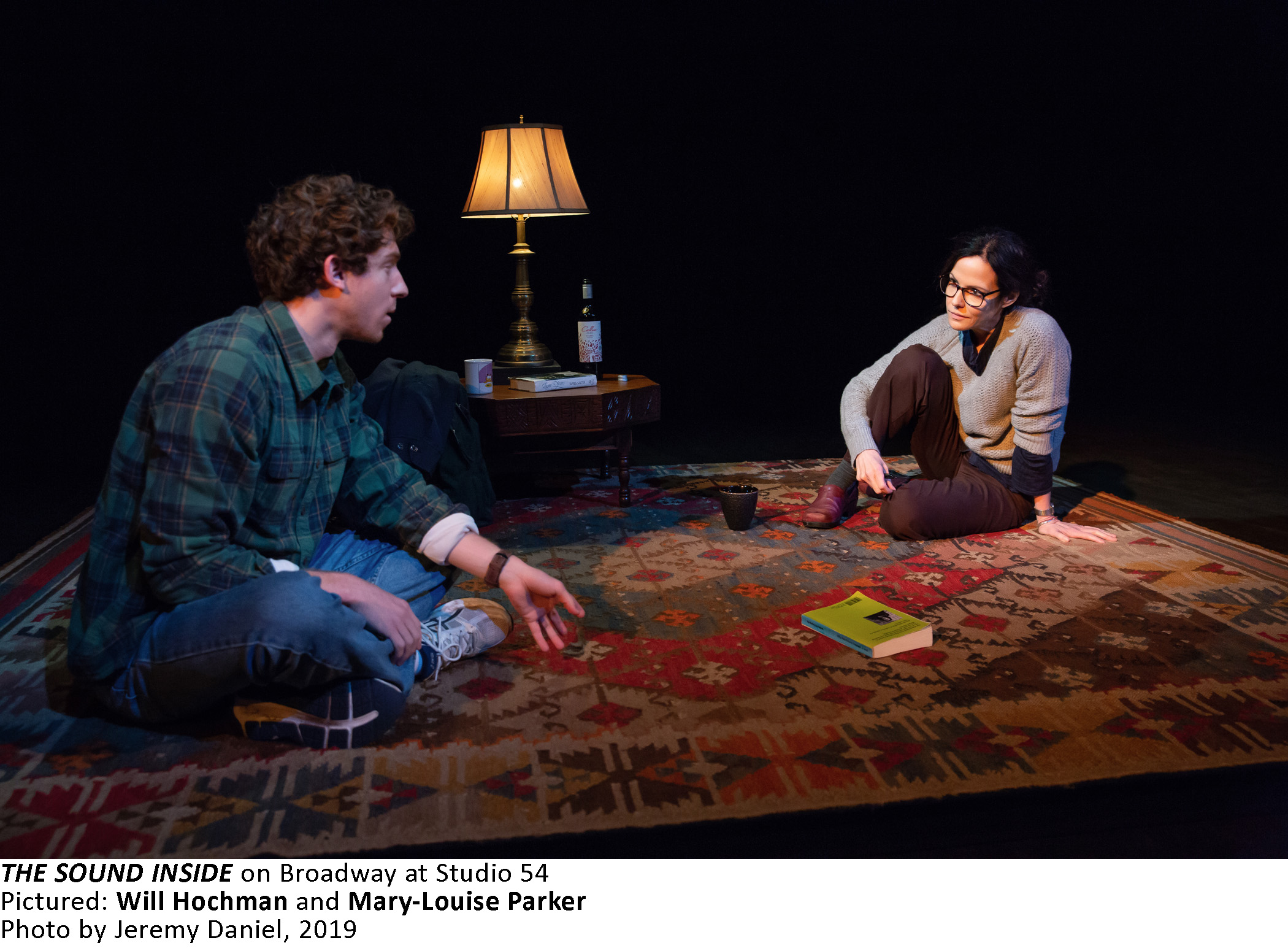 Christopher is also quite a loner who eschews technology and hipsters. Yet Baird views him as a prodigy and the two form a unique bond. Fact and fiction collide in this tautly woven tale where not a single dull moment exists.

In addition to the exceptional performances by stage veteran Parker and Hochman (making a marvelous Broadway debut), The Sound Inside offers technically impressive elements. Scenic designer Alexander Woodward has created a sparse, effective set that at times, feels hypnotic and otherworldly. Heather Gilbert‘s lighting enhances those feelings by creating slivers of white light, resembling subconscious pockets into the brain.

Rapp’s play is rich with literary references and is written with mysterious beautiful prose. Yet it wisely avoids pretension and is wholly accessible to those seeking a contemplative story. It’s the type of play that one must lean into but rest assured, it’s well worth it.

The Sound Inside on Broadway at Studio 54 (254 West 54th Street between 8th and Broadway) through January 12th. For tickets and information, visit https://soundinsidebroadway.com/