You are here: Home / ENTERTAINMENT / Ring Them Bells! All 75 of ’em for Liza 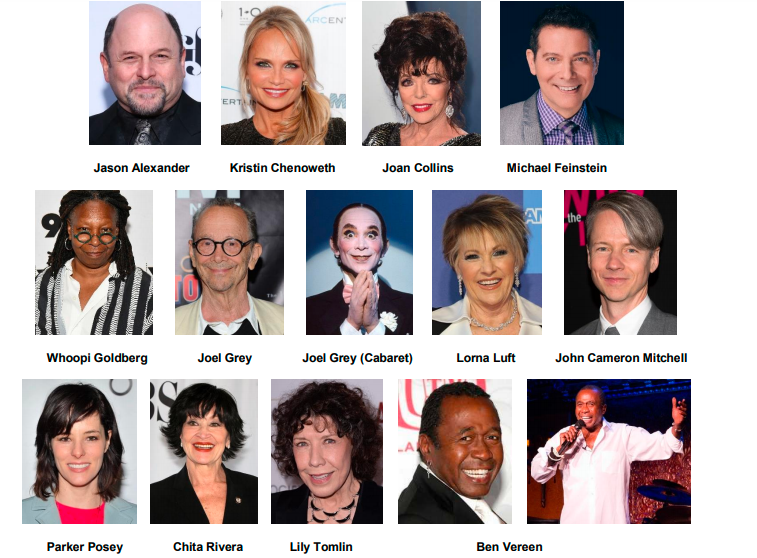 Tonight-and continuing through the weekend-the online streaming platform Stellar will air Love Letter to Liza: A 75th Birthday Tribute Celebration. In addition to those pictured, the event will feature composer John Kander, Kathy Griffin, Julie Halston, Melissa Manchester, Hoda Kotb, Michael York, Mario Cantone, and many others.  Guests are expected to either perform or offer tributes to this EGOT (Emmy, Grammy, Oscar, and Tony) award winner.

For those who have lived their lives without electricity, internet, or newspapers, Minnelli has been commanding every facet of entertainment since making her Broadway debut at 19 in Kander and Ebb’s Flora the Red Menace, earning her the first Tony award. She would go on star as Sally Bowles in the Bob Fosse directed, multiple Oscar winning musical film adaptation of Cabaret, and play the love interest to Dudley Moore in the box office smash, Arthur.

Perhaps one of the most fun projects she’s embarked on is her partnership with Pet Shop Boys in 1989 with a disco version of Stephen Sondheim‘s “Losing My Mind.” It became a top 10 hit in the UK and was featured on the album, Results.

Live theater is coming back and this event, with its starry line-up,  is sure to remind us why we miss and love it so much.

Tickets, priced at $30.00, are now available at stellartickets.com

A portion of ticket sales will be donated to The Actors Fund, the national human services organization for everyone in performing arts and entertainment. Through offices in New York, Los Angeles and Chicago, The  Fund serves everyone in film, theater, television, music, opera, radio and dance with programs including social services and emergency financial assistance, health care and insurance counseling, housing, and secondary employment and training services.