Edward Kleban obviously had some loyal friends. Not only did they tolerate his neuroses and shenigans when he was alive, but they all banded together to create a show about his life after he lost a cancer battle at 48.

That show, A Class Act, premiered Off Broadway at Manhattan Theatre Club in October 2000 and later transferred to Broadway in March 2001. Kleban’s longtime girlfriend Linda Kline and Lonny Price wrote the book.  Despite the critical acclaim, it was widely considered a financial flop. Not surprising. Regardless of how good it is—and it is quite a poignant and powerful piece-Kleban’s name carries little recognition beyond the theater world.

Fortunately, die-hard theater fans had a chance to either revisit or experience for the the first time, A Class Act, thanks to The J2 Spotlight Musical Theater Company, which nicely remounted this gem at Theatre Row.

Kleban (Andy Tighe) is best known as lyricist and co-writer of one of the most successful musicals of all time, A Chorus Line. Here, he has returned to his own memorial service at the Shubert Theater, home to his hit musical. Throughout the service, past lovers emerge. Mona (Amanda Altomare), Lucy (Christina Carlucci), and Sophie (Alaina Mills) each discuss Ed’s idiosyncrasies and talents through both spoken word and songs.

Kleban was a complex figure who was plagued by self-doubt,  insecurity, psychiatric challenges, and difficult relationships. Although he won a Tony award for A Chorus Line, he was unable to produce anything substantial beyond that. Essentially, he self-sabotaged himself. Much of this was due both to mental health challenges and the fact that he did not want his legacy to be only a lyricist. He also wanted credit for being a fine composer. In fact, he was.

The Bronx native left behind a treasure trove of songs, all of which were written for various, unproduced projects. A Class Act strings together these tunes, painting an intimate portrait of the artist.

J2’s production was smartly and carefully directed by Robert W. Schneider. All ten cast members worked equally hard to bring this tale to life and pulled it off with great finesse. This material could easily become maudlin and sappy if not performed with restraint, but this cast was careful to allow their audience to have genuine emotional feeling rather than manipulating them with narcissistic emotion.

In other words, J2’s  A Class Act—unlike its subject- wasn’t self-sabotaging. Instead, it was a small singular sensation.

This Thursday, J2 will open another rarely performed piece, A Day in Hollywood/A Night In the Ukraine, a collection of comedy sketches and songs that was turned into a two-time Tony Award winning musical in 1980. Schneider will once again direct while Broadway veteran Deidre Goodwin will choreograph. It will run through March 6th.

The Baker’s Wife will end their third season. The cult favorite toured the country in 1976 but never made it to Broadway. It starred Patti LuPone whose memoir trashed her then co-star Chaim Topol.  When Topol was replaced by Paul Sorvino and cast morale remained low, LuPone recalled the annoyance of Sorvino’s chipper enthusiasm. “It was like having Howdy Doody at Auschwitz,” she wrote. 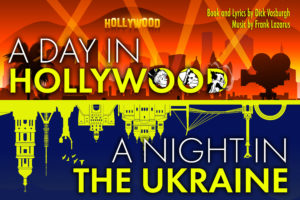 For tickets and information to all of J2’s shows, click here.