You are here: Home / ENTERTAINMENT / ARTS / ‘Downton Abbey’ Star Shines in ‘How the Hell Did I Get Here’ 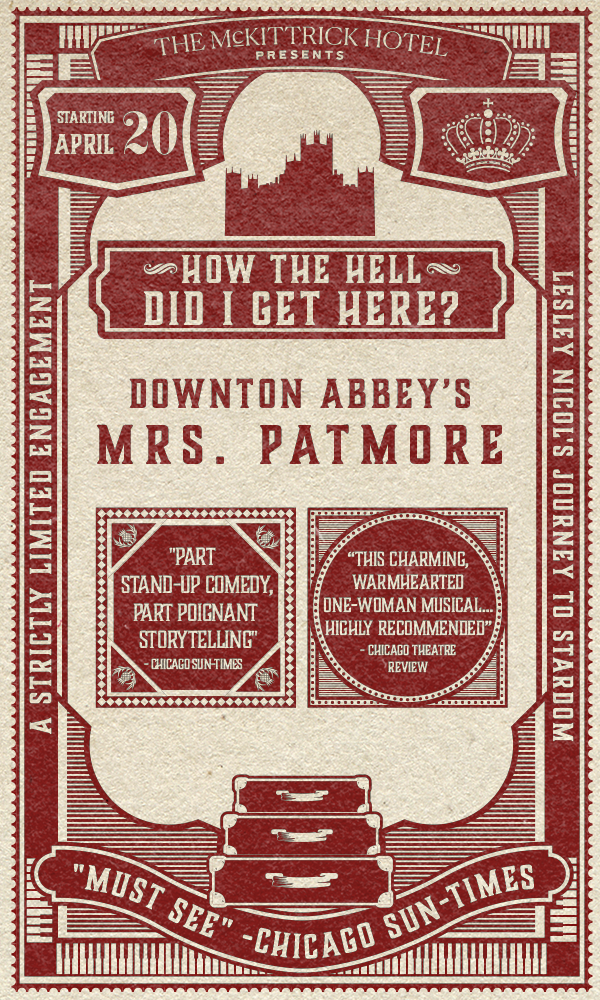 Downtown Abbey fans have cause to rejoice. One of the most beloved characters in the series is in town with her solo show—and it’s well worth the time and a ticket. Lesley Nicol has been acting for years, but it wasn’t until her turn on the British based series as “Mrs. Patmore” that she became globally known.

In How the Hell Did I Get Here she tells her autobiographical tale about a shy, cross-eyed girl who grew up near Manchester, England and confidently journeyed through the impossible world of entertainment to become a three- time SAG winner.

Mark Mueller, (co-writer of Billboard hits including “Crush” by Jennifer Paige, and “That’s What Love Is For” by Amy Grant) lends his talent as accompanist, co-book and music writer.  Luke Kernaghan directs, ensuring that the show moves briskly along and avoids saccharine displays, a pitfall that can often derail shows like this.

Nicol lays bare her heartaches and triumphs. Although you know that it will end with her stardom, it’s hard not feel the pain she experiences with every set back and hurdle. And difficult not to cheer her on when she triumphs—especially when she gets the chance to meet her long time star crush, Sir Anthony Hopkins.  Her natural personality is a bonafide winner and even those who have never seen the show (myself, I hesitantly admit), will be totally smitten and endeared to her. Nicol’s naturally kind, nurturing side is matched only her plucky, mischievous one.

On the vocal front, she’s no Barbara Streisand-nor does she purport to be. But her delivery is clear and cheerful and she sings all of the show’s original music with general ease. Besides, anyone who has seen the latest production of Broadway’s Company knows that excellent vocal talent isn’t a prerequisite for landing the lead in a musical.

At first glance, I was underwhelmed by Anshuman’s Bhatia scenic design. On both sides of the stage, crème colored luggage is stacked from floor to ceiling. “There could be more color on this set,” I thought to myself.  Once the show started however, I realized what a clever device this was as the suitcases double as a projector for Nicol’s photographs. Color me foolish!

Nicol’s American tour previously played Chicago. It’s now in New York at the McKittrick Hotel with future engagements in San Francisco and Pittsburgh. Much like A Chorus Line, How the Hell… is a show for anyone whose dreams have been shattered but who find the courage to press on to ultimate success.

How the Hell Did I Get Here?  is now at the Club Car in the McKittrick Hotel through May 22nd (It was extended by two weeks).  For tickets and information, click here