You are here: Home / ENTERTAINMENT / Kris Kringle Spills the Tea in ‘Santa’s Secret’ 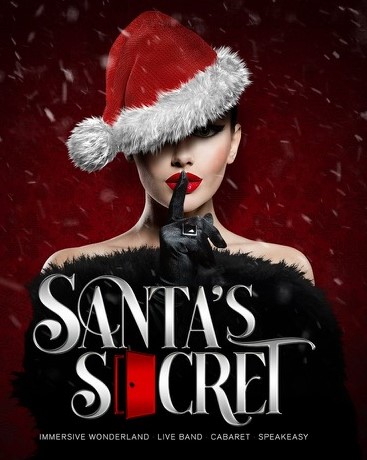 It turns out that being on Jolly Saint Nick’s nice list isn’t all it’s cracked up to be. At Santa’s Secret, the alternative is preferred. Tucked away on the fifth floor of The Shops and Restaurants of Hudson Yard, mischievous merriment awaits.

Guests self-guide themselves through a variety of holiday themed scenarios including sexy angels, hirsute lumberjacks, beautiful Barbie dolls, and toy soldiers with more flexibility than Gumby.   Eventually, visitors arrive at the North Pole and are seated and treated to a pay-as-you go cocktail and food menu. Between bites and sips, a five piece band starring the fabulous and flamboyant Inyang Bassey entertains with mash-ups of familiar pop and holiday music.

The show truly gets underway when ice princess Shequida takes to the stage to introduce an array of burlesque, ballet, and cabaret artists. During the show, Santa’s past transgressions are revealed, much to the devilish delight of the audience.

Santa’s Secret differs from traditional holiday fare and is intended only for adults. But those willing to loosen up and have some PG-13 fun are in for a marshmallow world of wild wonder.