You are here: Home / BREAKING NEWS / Beyonce- did she or didn’t she lip-sync? Stars weigh in.

There has been quite a lot of hooplah over whether or not Beyonce lip-synched the National Anthem this past Monday at President Barack Obama’s Inauguration.  One thing that is fact- Kelly Clarkson did actually sing (and got famously photo-bombed by Bill Clinton).  Beyonce herself has been under quite a lot of scrutiny for not telling the truth over the past couple of ye 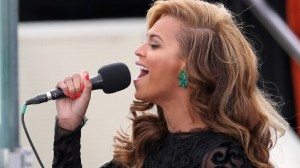 ars, most notably several people thinking her pregnancy was fake.

Several celebrities from Katy Perry, Jennifer Lopez and Aretha Franklin have come to the star’s side.  Aretha said- “I thought it was funny because the weather down there was about 46 or 44 degrees and for most singers that is just not good singing weather…” she told ABC News. “When I heard that I just really cracked up. I thought it was really funny, but she did a beautiful job with the pre-record.”  Preach Aretha, preach.

Jennifer Lopez, another star who has been in trouble in the past for her lip syncs, stated- “Sometimes it happens when you are in certain stadiums and certain venues and things, they do pre-record stuff because you’re going to have that terrible slapback,” on Jon Stewart.

This is going to be an interesting story for a while and will linger? Why? She is the freaking half time show at the Superbowl.  Many artists in the past have to lip-sync in those types of atmospheres based off of how big the actual stadium is (Britney, I am not giving you a pass here).  She is rumored to reunite with Destiny’s Child that night, which should make for quite an interesting show as she usually puts out all the stops in arenas like this.

My personal opinion? WHO CARES.  Who really freaking cares if she did or not.  She’s an amazing artist, we’ve all heard her perform live.  She’s got a billion Grammy’s under her belt and has stayed relevant so effortlessly it’s hard to believe that she has been in the public personal for 15 years now since the days of Destiny’s Child.  Is this gonna hinder her career? No.  The haters need to stop and see how they would feel in that type of area.  I wouldn’t mind Bill Clinton photo-bombing me though, so there might be some jealousy for Kelly there.