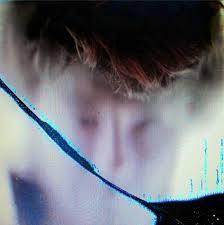 In Norton Jester’s beloved children’s novel, “The Phantom Tollbooth”, The Doldrums is a place where nothing ever happens. The inhabitants of this fictitious area follow a strict set of daily routines and live out dull repetitious lives. It is surprising that Airick Woodhead decided to borrow this name for his musical project, because his work is the polar opposite of mundane. In fact, there is often so much going on within any few measures that it can seem messy and overwrought. This is maximalistic ADHD music that could only be described using words like post-rock, post-pop or post-noise. Although it is not without its noticeable influences, on “Lesser Evil”, Airick has either created one of the poppiest noise albums or noisiest pop albums in recent memory.

Most of us were introduced to Doldrums through his remix of Portishead’s “Chasing the Tear” in 2010. It sounded almost nothing like the original, and it showed off Airick’s tight production work. The combination of vocal samples, noisy guitars  and melodically layered electronic overtones proved Doldrums to be an artist to get excited about. Three long years have came and went and now the one man band is finally releasing his debut album, “Lesser Evil”. He hasn’t changed his style much in those three years, so it speaks towards his aptitude that this music still sounds so relevant and modern.

Although at face-value, much of this album comes off as dance music, I am often left to wonder if these songs are meant to leave me ecstatic or woeful. While some might say that the album’s lack of musical cohesiveness is a weakness, you would be hard-pressed to call it boring. However, this music is much more ambitious to simply be called “entertaining”. It’s abstractness has occasionally left me empty, but in the end it works towards the album’s otherworldly themes.

While comparisons to other left-of-center Canadian pop acts such as Grimes and Purity Ring are apt, the most glaring reference point to Doldrums is Brooklyn’s “Gang Gang Dance”. Both groups create psychotically induced dance music that is founded through the use of heavy percussion and bass. The heavily ornamented sound also brings to mind Animal Collective’s 2012 album, “Centipede Hz”. Likewise, Airick’s nerdy voice is a combination of Panda Bear’s tonality with Bjork’s overreaching style. Countless artists come into mind while listening to this music, but at its best, Doldrums reinvigorate otherwise worn out trends.

Airick is always pushing his hardware to the tipping point, which makes the music feels as if it could break apart at any moment. While he is obviously having fun toying with his machinery, the music is also beautifully composed within its sporadicness. Second track “Anomaly” opens with bursting Cocteau Twins vocals and shoegazing guitar strumming only to retreat into a sentimental electro ballad. Many of the songs contain snippets of drum & bass or hardcore techno, so even the mellower songs can’t really be called such. What makes the seemingly bizarre instrumentation impressive is how all the musical styles are used so tastefully. Don’t get me wrong, this album is packed full of disorder, but the inharmonalities speak towards Airick’s warped musical vision instead of being artistic missteps.

It might be a mystery as to exactly what we should feel while listening to this music, but what I do know is that Doldrums is solely meant for escapists. When I listen to this music I am in a fantasy world, or better yet, an alternate universe. Many people will see passed how dark this release is and tag it as a party album. There is no problem with dancing, but these songs require much more analysis than the dance floor will allow. Much like the book its name is contrived from, Doldrums is a beautiful, stimulating and unpredictable adventure that I can’t seem to put down.