You are here: Home / ENTERTAINMENT / Off Pitch is Off Target 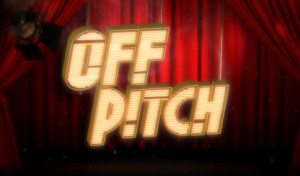 Off Pitch: Wednesdays at 10pm Eastern on VH1

In the last half decade or so, starting with the success of the Real Housewives series on Bravo, we have seen an increasing trend of cable networks taking the subject material of already successful shows and turning it into an inexpensive reality show to cash in on a trend (or sometimes if we’re lucky it will be an even cheaper reality knock off of an existing reality show). VH-1 continues this trend, trying to make real glee out of Off Pitch.

Off Pitch tells the tale of the Grand River Singers, an all-adult community choir that takes their inspiration not from the classics or A Capella street corner favorites, but rather from that cornerstone of modern music innovation, Glee. This year is a huge year for the Grand River Singers, as they intend on taking their show out of the tiny town of La Crosse, Wisconsin and on the road across the state. Off Pitch focuses most heavily on co-directors Tim and Rob who run the choir.

Much like American Idol’s audition process, we see our fair share of people whom either don’t sing well or ultimately sabotage their audition (one audition we heard most of the music, but only one line of actual singing, while another felt her voice was sabotaged because her chest got in the way). The current members end up at an equally brutal brush-up rehearsal before their last performance of the year in a county park. This leads to an incredibly nervous (and public) announcement of the current cast of the singers, which saw both more singers than the previous year and some incredibly misleading announcements (watching Rob toy with Josh, the only guy you end up wanting to thrive in the series was kinda heartbreaking).

Off Pitch is dangerously catty, however, verging on flat out mean spirited. While the Grand River singers are described as a family by some, it gets downright vicious at points, whether its’ Rob tearing apart his current singers in cutaways during each audition or even worse, calling out singer Greg on his weight (if the person in question is fat, than I’m morbidly obese). This cattiness is made worse however, when you consider that the stakes have been blown out of the water compared to similar shows. There’s no half-a-million dollar recording contract, there are no regionals or even sub-regionals. It’s doubtful that anyone in this group is getting paid to sing. In spite of that, the criticisms that the show provides of its’ singers solely exists to break them down when it seems like for many this should be a social and creative outlet that allows them to do what they enjoy.

The production crew doesn’t help matters, often focusing on sound snafus or bored patrons at a county park during their performances. One gets the vibe that the production staff is trying to get you to emotionally invest in it’s cast by emphasizing the weaknesses, which seems like a time-honored recipe for disaster. Finally, a major weakness of Off-Pitch is that it wants so bad to be Glee, but it’s only willing to show public domain musical standards (or really anything that doesn’t require a top-dollar royalty check) over the course of the episode that it takes away much of the advertised distinctiveness of the Grand River Singers.

The Final Verdict: While it’s interesting to see VH-1 put on a music related program, a rarity since the networks format switched to lists, I love the ____, and Celebreality a decade ago, Off Pitch still feels like it too has nothing to do with music. It’s downright mean-spirited, which is even worse considering the incredibly sensitive nature of the cast (I dare you to find me a cutaway where someone isn’t on the verge of tears). The worst indictment overall is that for something that wants to be Glee, it seems to miss the fun, joyful forest for the over-dramatic trees. Overall I recommend skipping this, and if someone can buy me a time machine so that I also can get my 22 minutes back, I wouldn’t complain.