You are here: Home / ENTERTAINMENT / Album Review: These New Puritans – Field of Reeds 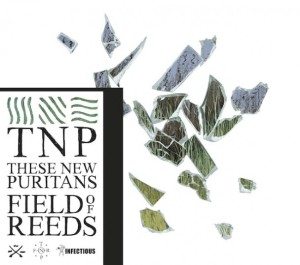 These New Puritans: Field of Reeds

Summer is now upon us, and once again, the last few weeks have seen the term “summer album” being thrown left and right at LP’s which contain music of a more playful and sunny variety. While Field of Reeds, the third album by Southend four piece These New Puritans, is by no means a “summer album”, it is certainly a brighter reinvention of the stark post punk inspired sound of the group’s first two LP’s. Because of this, Field of Reeds is in the perfect position to become the summer album for people who don’t like summer albums — or if you will, the year’s anti-summer album.

The closest genre that TNP’s new sound comes in contact with is art rock, but seeing how most of these tracks are made up of series of orchestral vignettes, using the term “rock” even in it’s loosest context doesn’t seem to fit. “Roxy Music” are clearly not an influence here, and neither are the group’s previous influences, “The Fall” and “Public Image Ltd”. Trying to figure out exactly how TNP arrived at this destination is surely a head scratcher, as this is certainly not a traditional progression. Unlike the heavy beats heard in their previous work, there is rarely any sort of streamlined pulse to keep us in a steady groove for more than a few measures. Even drum lines and vocals are noticeably absent for minutes at a time. At first, the album can even seem a bit fragmented, because often as soon as we grab hold of an identifiable rhythm, it fades out in favor for something completely different.

If you can tell by how I’m describing it, Field of Reeds is a difficult record — even compared to the group’s viscerally arresting last opus, Hidden. This is a much slower paced record (at least at first), but the tracks prove to creep up on your senses in highly unusual ways. Much of this can be contributed to the sonically intriguing production, which incorporates field recordings, deadly drones, noir-esque horns, children’s choirs, and a guy who apparently has the deepest voice in all of Britain. It’s a perfectionist’s record for sure, but there is also a very natural component to the music that is occasionally hair raising. One such instance, which happens during the tail end of the title track, there is a bell sound that repeatedly fools me into thinking the door to the subway train is about to close. Moments such as these make the music jump out into the real world, and It’s incomparable to much else.

Even “Fragment Two”, easily the most accessible song of the bunch, has an incredible array of instruments present throughout its four and a half minutes. However, most tracks run much longer, and prove to be more groundbreaking as well — “V (Island Song)” being the longest (and quite possibly strongest) at 9:16. The longer tracks contain their own interludes and are held together only by loose threads, such as distant piano or violins. Of course, this isn’t all quiet new age music; the band does break into the rock threshold occasionally, and when they do, the result is nothing less than extraordinary. All the musicians put in painstakingly  detailed efforts — the orchestration is tremendously varied, baselines are all perfectly placed, and the drums (when they are present) penetrate on a near tribal level.

Many people are going to refer to this band as pretentious, but to me that is a term as overused and contrived as the world’s current favorite word: “hipster”. Neither of those terms do anything to commemorate talent, and they both talk about something that isn’t even really related to music. Sure, these musicians are not particularly modest; as it happens, they want to do something profound, they want to create a masterpiece — I am glad to say that with Field of Reeds they have done just that.