You are here: Home / LIFESTYLE / FOODIE / The Nugget Spot- All Nuggets. All Day Long.

Anybody who doesn’t love the taste of Chicken Nuggets I would deem to be truthfully insane.  They will always be yummy and delicious no matter what way you cook them in.  So when a fellow coworker of mine discovered there was a place that devotes it’s restaurant to all things nuggets, I had to go myself to see what all the fuss was about (not to mention my gleeful excitement over an all nugget shop.)  This place of course is called “The Nugget Spot” which is located in the heart of Union Square.  Here is a little background information on this amazingly unique place.

All nuggets are made fresh to order. Chicken, pork and catfish, and mozzarella nuggets are coated with traditional toppings like Italian breadcrumbs or Southern-fried coating—the best seller to date—to more playful choices like corn tortilla, Panko, pretzels, and cheese cracker crust. Chef/owner Jason Hairston pairs the nuggets with his inventive homemade sauces such as Mumbo, Wasabi Mayo, Nacho-Queso and his secret recipe Shhh Sauce. New nuggets will be introduced on the menu regularly, such as turkey nuggets with a cranberry-based dipping sauce for the holiday season.

“There was no fast/casual spot in New York City that specialized in high-quality nuggets,” Hairston said. “We reimagined what the nugget could be. We refined it, elevated it and made one of America’s favorite foods better than you’ve ever remembered.”

The cozy East Village space is bordered with original exposed brick on one side opposite a wall with original 1930s wallpaper. High-top tables and stools fill the dining space, and a large-screen TV, giant chalkboard listing menu items and wood-paneled walls give the restaurant a warm, laid-back atmosphere.

Jason created the concept after serving as executive sous chef at Mesa Grill, Bobby Flay’s acclaimed restaurant at Atlantis Paradise Island in the Bahamas. He rose through the ranks of New York City’s fast-paced kitchens, including both the Tribeca Grand Hotel and the Soho Grand Hotel as sous chef under executive chef Herb Wilson. He previously manned the sauté station at Aquagrill, the Soho restaurant well known for its seafood and oyster bar. He first cut his teeth in the culinary industry under executive chef Geoff Rudaw at the Royalton Hotel’s Forty Four, after getting his start chopping vegetables at La Côte Basque.

Chef Jason was nice enough to treat me and my friend to a variety of the nuggets that they make, and needless to say we were not disappointed in the least.  What I found really fascinating about each one that he prepared, from the pretzel crusted and Captain Crunch crusted ones (my two personal favorites), is that everything tasted fresh and you really didn’t get that fried taste in them which we usually expect from many other dining establishments.  The fresh cut fries were a really great sidekick to the nuggets and were salted to a good degree. He provided as also with a variety of sauces to compliment the nuggets, and each of that had a distinct and tasty flavor that blended really well (Wasabi Mayo was my favorite).   On top of all of the craziness from that day, Jason was a true professional and really went out of his way to talk with me and my friend about each dish and how this restaurant came to be.  For an establishment that has only been around for a little while, I can truly see it going big places and setting itself up as one of the best restaurants in the Union Square area and beyond.  Definitely a place to check out if you are ever in that area in my opinion. 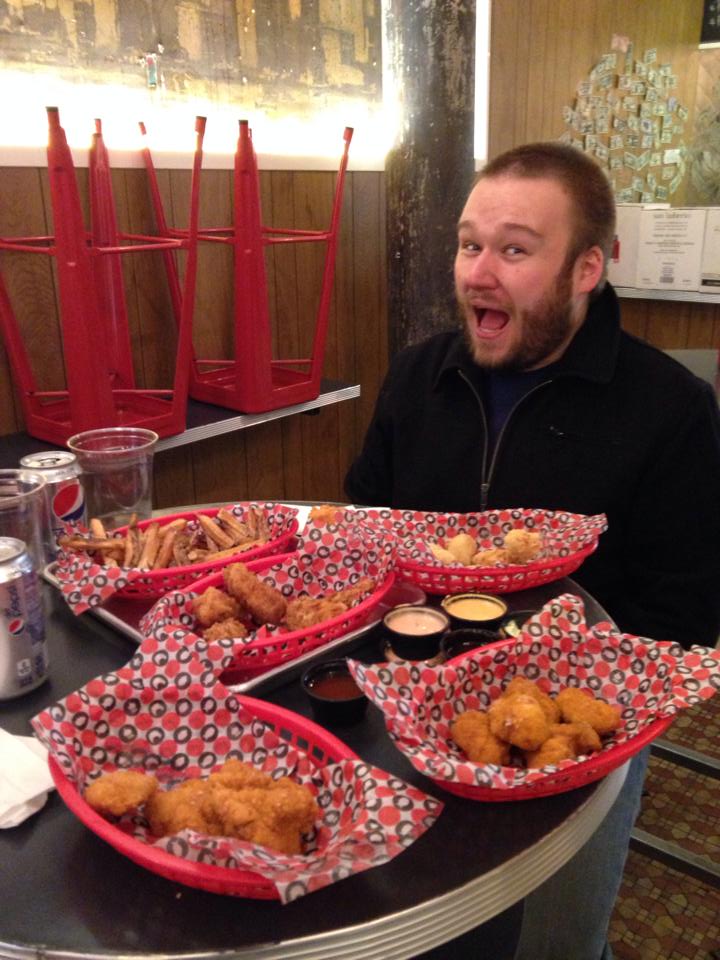 Want to know more about The Nugget Spot?  Check out their official website for more information, and stop by to experience all of that yumminess that is The Nugget Spot.  Just look at my face for the sheer happiness in it all.