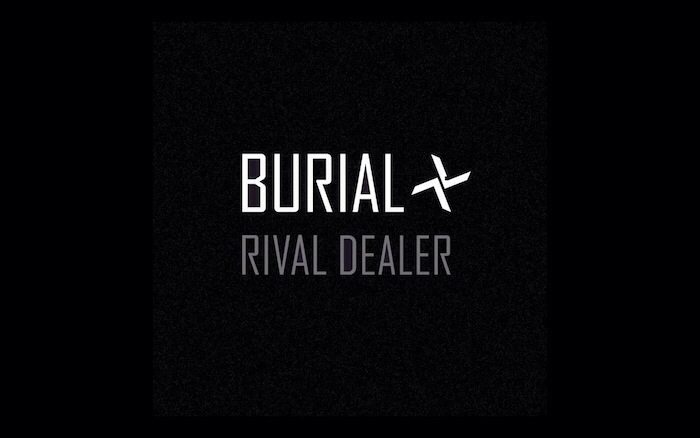 This past week I’ve found myself to be sucked into the holiday spirit of things; the shopping for gifts, the classic movies, the caroling. It’s a mood that, for one reason or another, I haven’t really been in for the last several holiday seasons, and I was beginning to think I had become incapable of finding it again. Part of why I have been able to rekindle this feeling this year is because it has been snowing, and another part may be because the school I work at had a heartwarming pot-latch ceremony, but mostly, it’s because the new Burial EP is out, and boy oh boy does it make my heart glow.

Despite the use of bells, glowing synth textures, and happy melodies that conjure images of figure skaters and snow cones, it does feel a bit off the mark to call Rival Dealer “Christmas-y” — especially because the opening track, with its drilling baselines and rough, shuffling edges, is one of the most dissonant works to the artist’s name. Instead, Rival Dealer’s main theme is one of hope — it’s an experience about finding out who you are and being true to that person no matter how hard you may be struggling. William Bevan himself has even said (through a text) that this EP is intended for anti-bullying purposes. This may sound super corny, and maybe it is, maybe this release isn’t as “cool”, or as “dark” as what Burial has become known for, but it’s undeniably more human, and it’s arguably more relevant to the evolving music scene. It’s funny, because with each release, Burial has moved away from the success of his breakthrough, Untrue, to build something that, well, feels more true.

This newfound honestness that affords us listeners an inkling of information towards the personality of the man behind the music is huge, because William Bevan is an artist we formally still know so little about; even if he is becoming increasingly adept at drawing us into his heart solely through the use of his music. So many theories have came up about who Burial is that it has become a bit of a joke. This release is sure to stir up even more questions regarding his personal life, as it feels like a sort of coming out statement for the artist. In terms of overall sound, this isn’t quite what one would call a reinvention though. He’s still sampling vinyl crackle, ending tracks abruptly, and harnessing emotive, pitch-shifted vocal samples with nuance and delicacy. The difference is that now, it seems as if these elements are all trying to tell us something; as if these three tracks provide the liner notes to a grand story of overcoming in the face of adversity. While this broader influence is a direction that Bevan has been toying with ever since he started putting out 10+ minute tracks with his 2012 Kindred EP, here it is done in a more efficient and provocative way. The untreated vocal sample that closes the EP — taken from Lana Wachowski’s coming-out speech during last year’s Human Right’s Campaign — is the most striking example of this (as well as one of the best moments for music in 2013), but there are many others as well. In other words, this is the closest Burial has gotten to making an actual concept album.

So Rival Dealer isn’t just a continuation of the high water mark period that Burial has been in ever since 2012’s Kindred — it’s a rebirth of his ideals into the most meaningful statement he’s yet summoned. And it’s easy to see why Bevan would be propelled to push his work this far off the grid. After all, he already changed the face of electronic music (as well as many other fields of music) with 2008’s magnificent Untrue — an album that’s importance is impossible to overestimate — so now it seems he has his goals set on changing the way we hear music itself, and how it can be used as a tool to open portals to new worlds. Both “Rival Dealer” and “Come Down To Us” exceed the 10 minute mark, and they feel like flowing streams of consciousness, unobstructed by hate and fueled by deep, passionate love and understanding. They exist as a sort of guardian angel, each measure providing consolation to the world’s most downtrodden and confused victims. Through these lengthy track times Burial is able to guide us through his realm of fairy tale magic as he gifts us with constant surprises and a state of complete immersion. The music all flows through you like a dream: holding onto you with full force until evaporating into the air and leaving you with its imprint on your memory. The 13 minute “Come Down To Us” is arguably the main highlight. We are first introduced to the track’s noir setting with a lonely voice saying “Excuse me, I’m lost”, and through the track other voices arrive to comfort this lost soul, helping her realize who she is and what her purpose is. An elegiac sitar melody plays in the background as this story is told, gently unfolding into multiple phases. I don’t know about you, but a supposed “dubstep” producer just made me cry. This is what I call capability.