You are here: Home / ENTERTAINMENT / ARTS / Christopher Wool at the Guggenheim

Christopher Wool’s self-titled retrospective runs until January 22nd at the Guggenheim. The exhibition fills the coils of the museum’s rotunda with a large sample of Wool’s work since the ‘80s—including digitally warped sikscreens, text pieces, photographs, and nods to No Wave and graffiti. 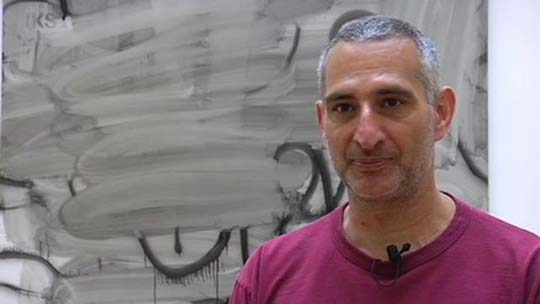 Wool had his breakthrough between ’86 and ’87, when he started using paint rollers incised with floral patterns and geometric designs. Like Warhol, Wool consciously allows the mechanized processes of reproduction to become a part of his art.

Due to the large body of similar pattern pieces done in the past decades, Wool’s early work may come off as somewhat unoriginal and uninspired—something out of Target’s Pop Art section.

However, Wool is a versatile artist that remains relevant today. In good form, he continues to question and tweak art through an applied knowledge of technology. Nowadays, Wool uses digital processing to warp the scale, color, and resolution of his paintings.

In the “gray paintings” done in the past decade, faded black enamel on linen reveals subtle tensions of composition and space. Wool is the kind of artist whose art tries to say something about what it is. He describes the gray paintings as an attempt to harness the forces of doubt and repression into creativity.

The blocky and disjuncted letter paintings stand out as an example of the exhibition’s ‘meta-ness’. In pieces like Trouble (TRBL), Wool maintains the form and order of language, while stripping away letters and manipulating spacing. The overall effect is tense and somewhat troubling.

Wool doesn’t shy away from pop culture references either. In Apocalypse Now, he samples a quote from the film of the same name, coming up with the post-conceptual mantra, “SELL THE HOUSE SELL THE CAR SELL THE KIDS.” The price realized for the piece at Christie’s was $26,485,000.

The retrospective also includes lo-fi photographs of bleak urban environments, taken in New York and across Europe. In the 90’s Wool would find a way to reform his older work through photography—by taking a photo of a finished picture, transposing it to silkscreen, and reassigning it to a new canvas. He also creates hybrids by manually reworking the doubles.

Of course, Wool isn’t without his share of critics. Dave Hickey called his work an “academically palatable brand of designer-punk.” And Adriane Searle from The Guardian recently tweeted, “He. Is. Just. Not. That. Good.”

It’s not hard to find beef with Wool’s work—whether you think it’s pretentious, dry, or just mediocre. I won’t be the last one to say that he’s a tad overrated. However, it’s important to keep in mind context.

Wool reinvigorated painting when he broke out, by helping make the medium relevant again to avant-garde practice in the late 20th century. He also inherits and synthesizes notable techniques from the American artistic tradition—such as Abstract Expressionism’s painterly gesture, Pop Art’s use of reproductive technologies, and using language a la Conceptual Art from the ‘70s.

As you walk up the Guggenheim’s ramp, traversing Wool’s artistic phases—notice two things. Firstly, Wool is an artist who is highly aware of the time he lives in (as well as his place in art history, channeling Warhol and Pollock). Secondly, he takes chances, and chances are the lifeblood of art.