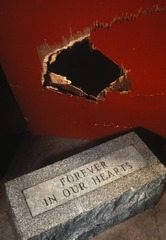 Has it really been a whole quarter century since the Tiananmen Square protests? Those who experienced the events both from afar and firsthand attest that the infamous June Fourth Incident feels like it could have occurred merely yesterday, while people of my generation will say that it’s an ugly truth that has existed in our thoughts for a lifetime. The student/citizen protests that began in April 1989 in China, begat one of the worst human-made tragedies of the post-war era, where government officials responded in violence and left hundreds dead and possibly many more (many remain hesitant that the government has released an accurate death toll). It’s a sad occurrence for any culture to have such a government-mandated body toll, but it’s also an instance that shouldn’t be forgotten, and appreciators of both art and history would do well to check out an upcoming exhibit that is coming to New York City in the next couple of weeks.

Promptly after the Tiananmen Square Massacre occurred, The Asian American Arts Center in NY installed a year-long exhibition on artworks devoted to the atrocity. The work proved highly successful with over 300 artists offering their work. Now, 25 years later, 50 of those projects are being showcased at Whitebox Art Center (329 Broome Street #1) from June 1st – 10th in the exhibit China June 4, 1988. The Asian American Arts Center is hoping that the exhibit will gain even more attention in this day and age, feeling that the presence of the internet will make the event all the more noticeable and accessible. Although most of the pieces here were by American artists, their dismay over the massacre is ostensibly in their work, demonstrating how the aftermath of Tiananmen Square had a global reach. The New York City-based artist Betty Beaumont will be re-presenting her art piece, Pierced Through the Heart.The work, which had previously been exhibited at MOMA PS1, is a granite block with the words “Forever in Our Hearts” chiseled on its top center, which was dropped through a red painted door. The dropping of this block created a scene of rupture and splintering, and then to complete the piece, the block was placed in front of the panel’s gaping hole. Betty Beaumont is an artist whose work has always resounded as being socially conscious, as her work often directly correlates with material such as language (Arab Voices, 2012), and culture (Who Will Our Children Sing Songs About in 100 Years). She’s also shown a strong concern for contemporary problems, such as her 1978 Love Canal U.S.A., which is a series of photographs of boarded up houses resulting from an influx of chemical waste in Love Canal, NY. She’s even made strives to help the environment through her artwork. In 1989, she did a performance called RiverWalk in Rochdale, England, where she led an interdisciplinary team of engineers, along with a museum director, into a covered English river, The Roch. The community of Rochdale had long thought that the river had been polluted by the Industrial Revolution, but Beaumont found it to be clean, in essence giving it back to the town. Pierced Through the Heart, fits snugly into Betty Beaumont’s body of art, thematically and construct-wise. It’s a piece that visualizes outrage through it’s destruction, as well as empathy through the tender words engraved in stone. The fact that the loving phrase “Forever in Our Hearts” is written on this granite block, gives the work the aura of a great tapestry, or tome, remarking how historical an event this was, and how it will always be ingrained in our reality. It’s a work that’s lost none of its meaning or effect over time. That’s just one of the many great pieces that one can find on display at this show. It’s important to remember that governments are capable of horrendous acts, and at any time history may be subject to repeat itself. This exhibit now acts as something of a transient archive for Tiananmen Square, that both documents what happened, as well enlightens viewers to it’s overreaching effect. Hopefully viewers of China: June 4, 1988 will experience emotions and reactions about The Tiananmen Square Massacre, that will be sustained and remembered by future generations.