You are here: Home / OPINION / 10 Years Since My Mother Passed- What I Have Learned

Death, just like taxes and change, is something that is inevitable in one person’s lifetime.  The word “death” can have a variety of meanings but in this case it means losing a loved one due to circumstances we ourselves can’t control.  For the first eighteen years of my life I never experienced death on a level where it would take me to places mentally, spiritually and physically like it did five months after my eighteenth birthday.  However the loss of my mother Lisa, who tragically passed ten years ago on December 23rd due to complications with Brain and Breast Cancer, completely changed my view on how I saw death and ultimately life after it.  For someone like me who had a pretty happy childhood to a fantastic teenage life to so many questions unanswered over something that turned out to be my Kryptonite, there has been a lot that I have learned in the decade since my mother has passed.  Now granted, everyone deals with these sorts of issues differently.  This has just been my experience and my advice on what one could do after they lose someone who meant such a great deal to them.  The bottom line for me throughout it all is that from the ashes of your loved ones will arise something so much more powerful for you as a person to figure out.

I should start by giving you all a peek into events leading up to her passing.  For me growing up in Long Island had its perks and privileges but when it came to having two amazing parents I couldn’t have asked for more than what my father and mother did for me.  Both came from parents who consistently told them they weren’t enough and they were never going to make it in life, and something that I am eternally grateful for is that they broke that cycle and told me and my sister nothing was out of our reach.  My mother developed a knack in her cooking abilities and turned that into a successful catering business as well as working at some really fantastic local restaurants in the Huntington area.  Her goal was to eventually move to Cape Cod, open up her own restaurant and enjoy some peace and tranquility outside of her hectic schedule on Long Island.  Late in 2003 she developed massive migraines and checked herself into Huntington Hospital, where she discovered that she had multiple brain tumors and they were somehow connected to her breasts.  You know, because in these situations its even better when its buy one, get one right?  Ugh.

When I found out that she had this it was more disbelief than anything else.  I had my friend Katie’s party to go to that night, and the last thing I really wanted to see was my mother in some hospital bed dealing with something that I personally never thought would happen to her or any of us.  My father had stage one kidney cancer when I was 14 but they got that sucker out of there quick and he has been fine ever since (a little crazy at times, but who isn’t?).  I was in a huge amount of denial which stayed with me until a month later when her own hair was falling off her head very quickly.  She finally decided one day to shave all of it off, which was the first time where I finally said to myself, “Shit.  This is real”.  Throughout the year she had her ups and downs and was able to  see a lot of vital moments for me such as my prom, graduation and first day of college in which she was in good spirits and seemed fine.  Then things took a turn for the worse, and this was when my life would change forever.

When I came home for Thanksgiving my mother was still in good shape.  Her peripheral vision was a bit off, but for the most part everything was still in tact mentally.  When I came home for winter break the month after that was when everything went downhill.  The medication she was taking wasn’t working anymore, she was throwing everything up she put in her mouth including the water to take her pills.  It was too much for all of us to handle.  I told her that I believed the tumors came back in her brain, even after all the radiation and chemo, and that we had to go get her an MRI asap.  She agreed, and the day we were going to go she collapsed in the shower and had to be taken to the hospital.  This was my Kryptonite.  The one thing that I couldn’t do in my life was save my mother from the physical torture this cancer put her through, and that was never more of a reality then when I had to drag her out of our shower and onto her bed because she lost feelings in her legs.  Here is a lesson- for anyone who is fighting with their family/friends over petty shit, read and reread this paragraph in particular because it pails in comparison to when life gets really tough like this.  In other words, get that stick out of your ass and get over it.

Two short days later on December 23rd she passed away around 7:00 PM.  The hospital didn’t even know that she passed so to add insult to injury we had to discover her that way right when we walked in.  A common thing that people have told me over the years is the following- “I don’t know how I would be if I lost one or both of my parents”.   I didn’t either, until my father nodded his head after my sister and I were excused from her hospital room that she in fact, died.  It is a rush of emotions that I have never experienced before, and something that quite frankly I don’t want to experience again for a very, very long time.  For me, it felt like something took over my body and I couldn’t get it out.  The rest of that night, week and months to come are a blur for me minus a couple of key parts.  To believe that it has been ten years now is something that is shocking to me because I go through moments where it feels not so long and then there are times that it feels eons away from me.  Throughout it all, I have learned some pretty great life lessons due to her passing.  There are many I have left to learn, but that is what life is for really is to figure them all out.

You find out who really is there for you in the long run, not just for the time being.  Go through something like death, especially when it is this close of a loved one, and you will truthfully see who is there for you.  What really floored me was the people who came out of the woodwork and stuck by me over the past ten years, many whom I wasn’t even close with growing up.  Others were people I was close with and simply didn’t have time when I needed them during a weak moment or even just to talk, and that to me shows a huge sign of insincerity and immaturity all wrapped in one.  I can say now ten years later that I am happy with the people I have in my life, some who were there before she died, some emerged right after and some who never met her but have been ride or die for me since then.  My mom always told me it wasn’t the quantity of friends that you have but more the quality.  I can say wholeheartedly that statement couldn’t be truer and I am beyond content with my friend situation right now.

Don’t sweat the small stuff.  When going through something this can be tough and exasperating, you find yourself in a constant struggle to see the happiness in things.  Especially shortly after.  Life can get tough but something that I have said for such a long time is “What this tragedy has taught me is that this will be quite possibly the worst thing that I can go through in life”.  When you have visibly seen your bottom, gone through it and come out the other side with a positive attitude, everything else can fall at the waist side and be handled accordingly.

Your life doesn’t end just because someone else’s did. This took me roughly two years to really understand that particular statement.  I had to head back to college roughly a week and a half after my mother had passed away, against my own personal wishes as I didn’t feel like I had enough time to grieve what exactly just happened.  But I went back to Providence as a way to distract myself from the reality of the situation.  Each time I would come home for a break or weekend there was a part of me that really believed this whole thing was a hoax and that she was going to be there greeting me with opened arms.  Each time I was wrong and in a way was let down.  Finally, one morning during junior year, I woke up and surrendered the fact that she isn’t going to be here for me in the physical presence.  I don’t know if it was a dream or just a foregone conclusion, but at that point I decided that my life was worth living and to not let the death of my mother consume my every thought.  You have to move on and continue doing what is best for you and not let a circumstance you had no control over take you down.  It will only hurt you in the long run.  Trust me.

Talk to a therapist.  I was against this whole aspect originally because my thought process was, “They don’t know me, or her, how can they tell me how to live”.  Shortly after my mother passed away I started seeing a therapist weekly through my college which after initial hesitation turned into something that was quite therapeutic for me (PUN!).  They are an unbiased source that listens to your issues and helps you along the way.  My particular therapist also lost their mother recently at that point so I felt like I had someone to relate to in a time where I felt very alone in this.  I saw him on and off for a couple of years, but if you find the right therapist suited for you it can work wonders for your mental well being.

No matter what, have the belief they are still there with you. Hands down the most important lesson that I have had to learn, even forced myself to learn at times.  Life is cyclical.  It has its ups and its downs, and its ultimately up to you to make your destiny.  I have had my doubts about believing in god and all of that, but I am a firm believer that my mother is watching over me somehow as she has seen me through my toughest of times.  It may be the spiritual side of things for me but I know she is there and my hope when I eventually pass is that on some level we will be reunited. 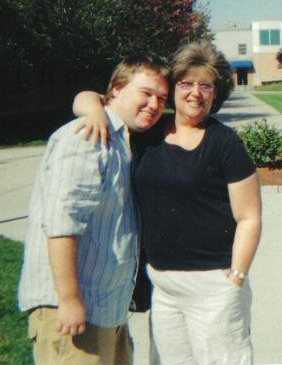 Love you Mom.  Miss you every day.