You are here: Home / LIFESTYLE / FOODIE / NYY Steak Hits It Out Of The Ballpark… And More

As someone who has been a lifelong New York Mets fan, a struggling one per se, I tend to narrowly avoid anything that has do to with the Yankees.  I mean, when you grow up with the last name Shea it is sort of embedded in your system to ultimately root for the Mets even though in recent years a local high school team has a better shot at getting to The World Series than they do.  I blame that on the name change from Shea to Citifield, but I digress.  Luckily, I had a huge change of heart when I visited their official restaurant called NYY Steak this past Wednesday.  Located right in the heart of midtown Manhattan on 51st between 5th and 6th Avenue (with alternate locations at Yankee Stadium and Coconut Greek in Florida), NYY Steak is to fine dining what the Yankees are to baseball- just great.  This is their quote, which I was originally hesitant by, however after my experience I can truthfully say that statement couldn’t be… truer.

The location itself is quite grand upon arrival.  The space is two floors and seeing as it is fine dining I would highly recommend not showing up in a pair of jeans and t-shirt and maybe getting a bit dressed up (nothing they said to me on their part, but I should’ve known better based off what I was wearing).  Something that was fascinating about NYY Steak was that the plates that we were served on were the traditional colors of the New York Yankees- blue and white.  That may not seem so spectacular but what made it cool was that each plate had a number of a legendary Yankee player imprinted on the top of it.  So you had your run of the gamut of players like Yogi Berra and Joe DiMaggio’s numbers just to name a few while you are dining on their delectable items that they serve.  The service was top notch as well, with their impeccable wait staff accommodating me and my friend at every stop and recommending the best of the best that was on their menu that night.

The menu itself for the main part is Americana at its best, from its 21 day USDA Steaks (butchered in house) to its incredible line of Seafood, NYY Steak has got you covered.  Let’s go through what in my opinion you should have while you are dining there.  If you are looking to start off with a soup and salad, I would recommend The Crab Bisque with cream & sherry and Ozzie’s Spinach Salad with dried cherries, pine nuts, roasted bell peppers, BACON and shaved asiago cheese in a cherry vinaigrette dressing. The bisque itself was quite warm and creamy and the Alaskan King Crab was cooked perfectly.  I for one am not the biggest spinach fan however combined with all the elements it made for one tasty salad. 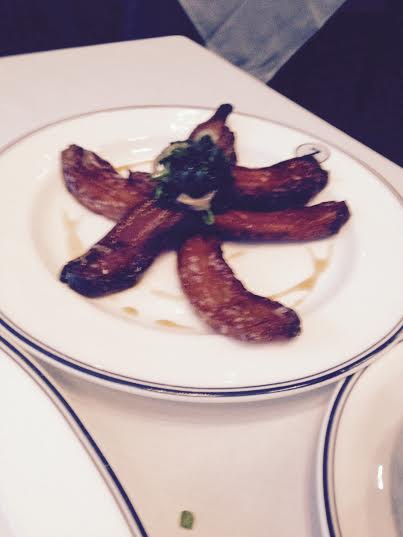 Moving onto the appetizers might I suggest two words- STEAK BACON.  Yes, pictured about you have their steak bacon which is cured and smoked in house.  Putting two of my favorite meats together in one tasty bite really is quite the treat itself, and their steak bacon is no exception.  Another tasty option is of course a classic Colossal Shrimp Cocktail with a horseradish cocktail sauce and something that you can get as an entree but we actually opted to get them as an appetizer. 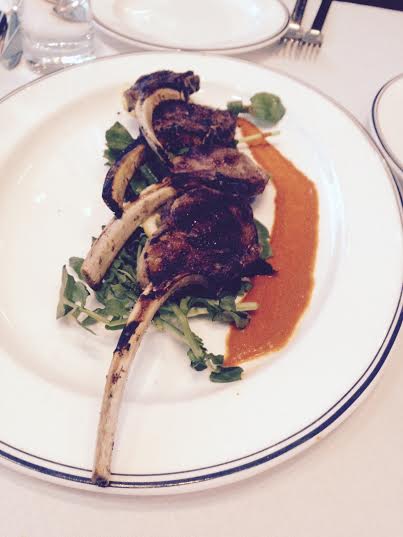 This is their Dry Aged Lamb Chops, which if you ordered as an entree would come as two double-cut chops and rubbed with fresh rosemary & roasted garlic.  However, they were gracious enough to make them for us in a lollipop format, where we could literally pick them up and eat them off the bone.  I don’t know if it was the rub or the way they cooked the meat, but honest to god this has got to be one of the best tasting meats I have ever experienced in my life.  The flavor on them is insane and can dual well if you want to share with others or have for yourself as an entree.  Heck, its so good it even got its own paragraph on here.  So that is saying something. 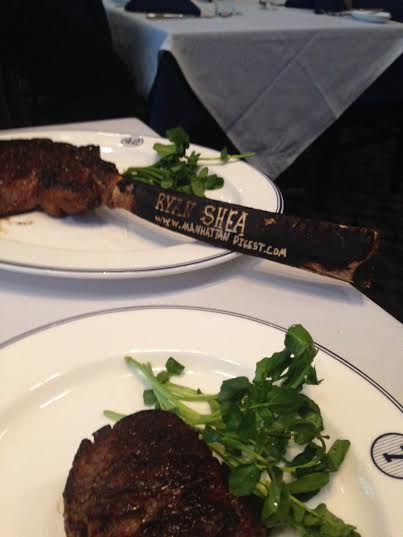 For a main course option, outside of the lamb chops, a good classic choice would be their Filet Mignon which comes in a 6, 8 or 12 Oz. Cooked perfectly and can pair well with any of their yummy sides like Lobster Mac N Cheese & Garlic Mashed Potatoes which they provided us with.  Something that they also do is that if you order a particular steak they will carve whatever you would like onto the bone of it.  No kidding, look above.  I was short of in shell shock when they told me about this originally and even in more shock when they presented it to me.  I mean, my name and website on a steak.  That I can keep, as a memento.  Totally awesome. 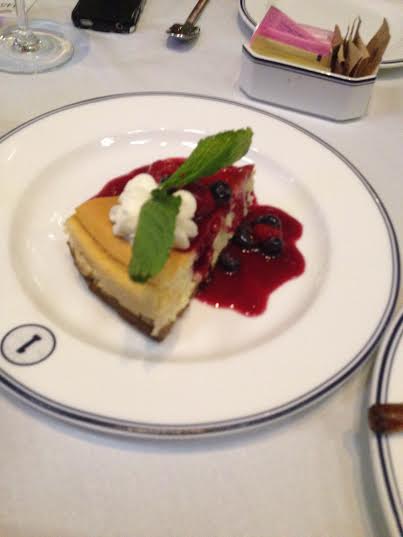 To finish the meal off with something sweet, try their classic New York Style Cheesecake, Chocolate Covered Pretzels or Creme Brulee as it a great way to end.  10/10 in my book for so many different reasons.  For more information on NYY Steak’s three locations, menus and so much more, check out their official site.