Please excuse me for a moment while I air two gripes. I’ll be back after these messages with my round-up of 2015 theatre.

Can we all stop talking about Hamilton as though it were the only show on the boards right now? I confess that I have not seen it, although I have enjoyed listening to the original cast recording. I’m guessing that it is worthy of the accolades. I suspect that the performances are award worthy. I believe (from what I’ve been told) that the staging is innovative. I’m estimating that words like, “game-changer” and “revolutionary” are appropriate. Yet this I know for sure: 42 other shows opened on Broadway in 2015 and long running shows continue to play to packed and nearly sold-out audiences eight times a week. The coverage that Hamilton received (and continues to receive) is similar to the reporting tactics of our mainstream media outlets: A major news story breaks and each and every headline for weeks following is about that singular occurrence. Meanwhile, other global events occur and are subjected to a two sentence blurb in the news ticker-or even worse-are passed by with total disregard. So, let’s stop acting like Lin Manuel Miranda, talented though he is, is the new messiah of musical theatre. Hundreds of other performers earned their paychecks by turning out fine performances and other stories were were worthy of presentation. There is room at the table for nearly everyone, and there’s more than one entree (Hamilton) on the buffet.

On to my second gripe: What was the big deal about King Charles III? By no means was it a bad play, but with all the hype surrounding  it, you’d have thought they were passing out solid 14k gold programs at the show! It had fine performances and a modestly interesting plot, but Mike Bartlett’s imagined scenario about the  future of British politics was–and I’m sorry– royally overinflated with hyperbolic praise.

Now that I have that off my chest, here are some of the finer shows (in no particular order) that challenged beliefs, softened hearts, or simply provoked some genuine belly laughs in 2015.

Believers and non-believers alike flocked to Playwrights Horizons to see playwright Lucas Hnath’s dissection of evangelical Christianity. Yet the show so ingeniously extended past the confines of a mega-church and forced us to confront our own beliefs, religious and otherwise. How far are we willing to go before our own rigid ideology consumes us and those closest to us? The show closed on October 25th at the off Broadway venue, but the aftershocks continues to cause intellectual rupture.

Director Jerry Mitchell and Choreographer Sergio Trujillo make musical theater magic with this auto-biographical treatment of Gloria and Emilio Estefan’s struggle and rise to the top of pop music charts. This depiction of scrappy demeanors and laser focused determination is both inspiring and joyous and will put a smile on your face as wide as an avenue block. The show received mostly favorable reviews and cast members continue to “do the conga” at Broadway’s Marriott Marquis Theater.

It’s difficult to classify this into the the category of “entertainment”, but writer and director Yael Farber’s collected stories of female brutality and an unspeakable rape in New Delhi may well be the year’s most important play. With human rights issues facing us from numerous angles, Nirbhaya’s timely message exposes the dark realities of cruelty but assuages it with compassion and fortitude. It ran for a month (April-May) downtown at the Culture Project in the Lynn Redgrave Theater.

A frustrated, closeted, gay father who takes his own life and a lesbian graphic novelist who tries to assemble the fractured pieces of her small town Pennsylvania family is far from traditional musical theater. And yet Lisa Kron’s book, along with Jeanine Tesori’s score turned this show into a smash hit with its’ profound and touching approach of assembling the complex pieces of our past. After winning multiple Tony Awards, including Best Musical, the show continues to enjoy an open ended run at Broadway’s Circle in the Square.

With selfies plaguing every square inch of the internet, the timely return of this warped and wonderful show by lyricist Joel Paley and composer Marvin Laird couldn’t be better. Drawing from numerous classic films, this fun romp about an unmitigated 8 year girl intent on being a stage star first premiered off Broadway in 1992. In June 2015, hell child Tina Denmark returned with a vengeance to St. Luke’s Theater, where she continues to wreak hilarious havoc in the open ended, off Broadway run.

Set in the Elizabethan era, this silly and clever musical plots two aspiring playwright brothers against William Shakespeare in an attempt to discover the “next big trend” in theatre. Non-stop energy, ridiculous sight gags, and a tribute to musicals make this show one of the most entertaining in town right now. Wouldst thou care to take it in, get thee to Broadway’s St. James Theater whilst it enjoys an open ended run.

7. Who’s Your Baghdaddy Or How I Started the Iraq War

How the year’s smartest musical managed to fly virtually under the radar is baffling. A.D. Penedo (Lyrics and Book) and Marshall Pailet (Music and Book) approached the machinations of the Iraq war in the setting of a 12 step program. Part satire, Part drama, and ALL intellect, this off Broadway show received the NY Times Critics pick and played at midtown’s Actor’s Temple this fall. Let us hope it preserves the incredibly talented cast and finds another home in 2016.

Who would have thought that two brothers from Australia would so brilliantly capture the antics of the Clinton administration? Paul and Michael Hodge created this witty and often bawdy parody featuring two actors playing Bill Clinton: One reverent figure and one skirt chasing ladies‘ man, guided by his libido. Kevin Zak’s Kenneth Starr and John Tracey Egan’s Newt Ginrich stole the show with their villainous shenanigans, including hiding out in the basement of the capital eating frosting while they plot against the Democratic regime. The off Broadway show closed in June and while we may not see another stage revival anytime soon, the real life title character continues to make drama in the  presidential bid.

Comedian Steve Martin (music, book, and story) and singer-songwriter Edie Brickell (music, lyrics, and story)  have joined forces to write this incredibly wonderful slice of American life. Set in North Carolina, it follows a World War II soldier who has returned home to fulfill his dream of becoming a writer. When he stumbles upon a literary editor at a southern journal, they soon discover how connected their lives truly are. It made its’ debut at San Diego’s Old Globe in September 2014. Currently, it plays Washington D.C.’s Kennedy Center through January 10th, and in February, Broadway audiences will receive this glorious gift. When leading lady Carmen Cusack opens her mouth to sing Brickell’s catchy melodies, people will take notice of her vocal excellence. Some critics have derided the show as being too cheery, optimistic, and/or folksy, but with rising global threats and fears facing us, it is nothing short of the perfect antidote. It’s hard to remember the last time I left a completely original musical humming the tunes, but virtually every number in this well crafted piece lingered long after the curtain fell. 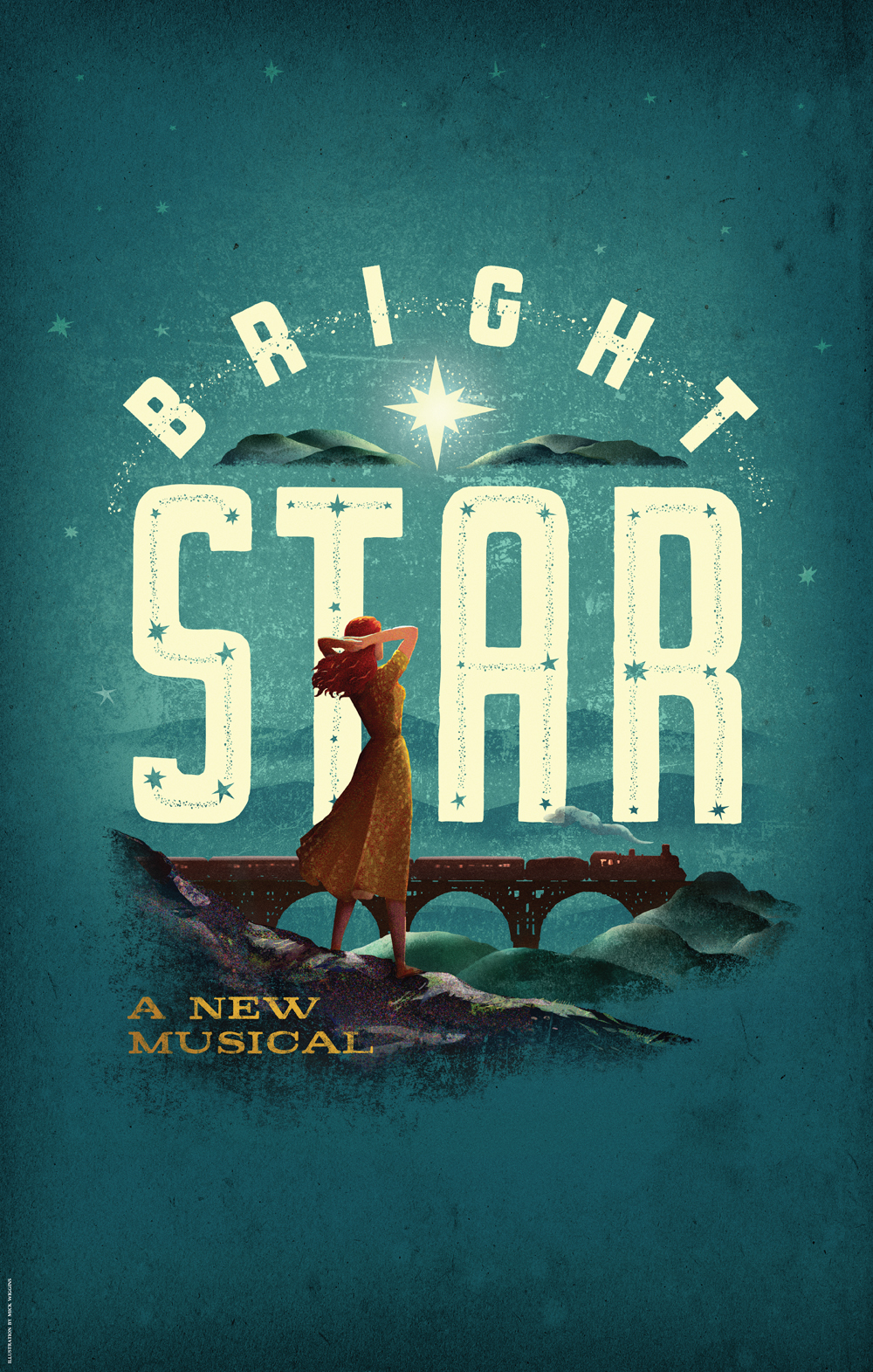 Benjamin Scheuer’s one man show was lavished with numerous awards, critical acclaim, and saw a sold out run downtown at Culture Project’s Lynn Redgrave Theatre. With seven guitars, Scheuer conveyed his own stories, including a challenging relationship with his father, a battle with cancer, and the pain of a romantic break-up. His inextinguishable flame for life is life-affirming and left us all reaching for the kleenex. Scheuer’s show played at the Off Broadway venue this summer, and he continues to tour with the show in cities across the country.

Thanks to all of our Manhattan Digest  readers for consuming my two cents worth this year. Let’s toast to a 2016 filled with  tears, jeers, leers, and cheers on the boards.