You are here: Home / ENTERTAINMENT / An Interview with DISASTER’S Jennifer Simard & Seth Rudetsky

There is a mutual admiration society meeting nightly at the Nederlander Theatre, home to the current hit, Disaster! The Musical.  The show, which features a groovy blend of disco, is set on a floating discoteque casino where Broadway veterans parody all of the seventies disaster movies.  Actor Seth Rudetsky gathered many of his long time stage friends including Roger Bart,  Kerry Butler, Kevin Chamberlain, Adam Pascal, Faith Prince, and  Rachel York to mount the much lauded Broadway laugh-fest. He also enlisted Jennifer Simard, a superb actor who is no stranger to the Broadway stage, but who is delivering a much talked about break-out performance as a nun with a gambling addiction.

Simard’s unique riff on the Jackson Five’s “Never Can Say Good-bye” is the stuff of comic genius. It’s also the stuff of hard work, as it requires a good deal of breath control and physical activity. “Not only do I have to play a nun on stage, but I have to play one off stage as well,” Simard said in a recent interview with her co-star Rudetsky. “I have to be extremely disciplined to do this job. I have to train by spinning (she favors flywheel) and jumping rope and I can’t drink.”  A quick witted Rudetsky quickly interjected, stating that Simard “got sober for the show and they are all so proud of her.” After a hearty laugh, Simard grabbed my iPhone recorder and said, “For the record, I just want to say I am NOT an alcoholic!” She is, however,  ecstatic for the opportunity to be starring in Broadway show with her friends. She just nabbed a Drama League nomination and tongues are wagging about a possible Tony nomination.  Simard is playing it cool. “This may sound trite, but I’m really just grateful to be here and have this job”, she said. “As far as a Tony nomination… Who wouldn’t want that? Still, losing my mom about a year ago was a great equalizer and really put things in perspective.” Simard went on to praise the industry. “There is a wonderful Broadway season happening right now and that is the real winner here. Thank God that our community is thriving!”

Simard has been working on New York stages since the mid-nineties. Having been in the original Off Broadway cast of  I Love You, You’re Perfect, Now Change, she finally made her Broadway debut in 2007 opposite Mo Rocca in The 25th Annual Putnam County Spelling Bee. “Prior to that, I had been in shows where I was playing multiple characters, but I was able to just sink my teeth into one role with Spelling Bee.”

She met her friend, Rudetsky before to moving to New York. He was playing at the piano bar, Rose’s Turn, where Simard came to sing, He was impressed with her voice and the two later met again when they realized they shared the same group therapist. Prince coincidentally also went to the same therapist. (Proving the theory that the group that kvetches together, acts together). 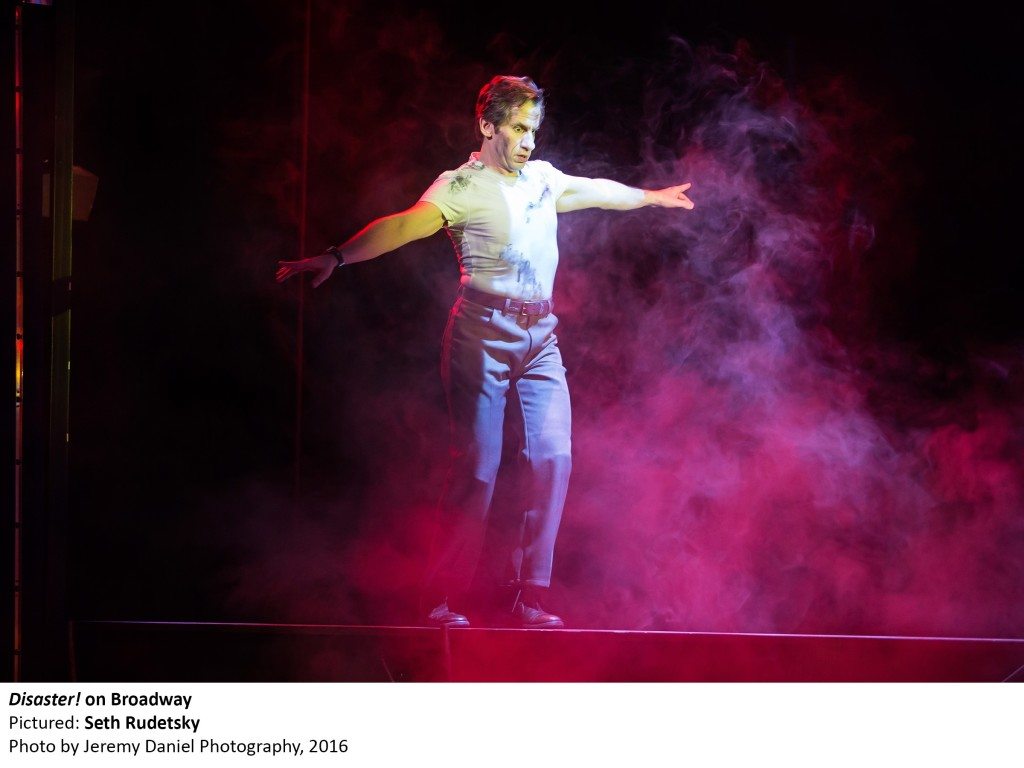 Rudetsky beamed  when he spoke of  his show and the cast. “Everyone has their payoffs and amazing moments in this show”, he said. He has heard more than once from his fellow cast members that this has been their most fun Broadway outing. Given the number and success of the cast’s cumulative roster, this is no small compliment. Simard agreed. “They have nothing to prove. There are no egos here. We truly love and support one another.” But do not get on their bad sides. The pair share a dressing room with a sign that reads, “Volcanic” above the door. “We’re very nice people,” Simard said, “But if you piss us off, we will explode,” she joked with a wry grin. 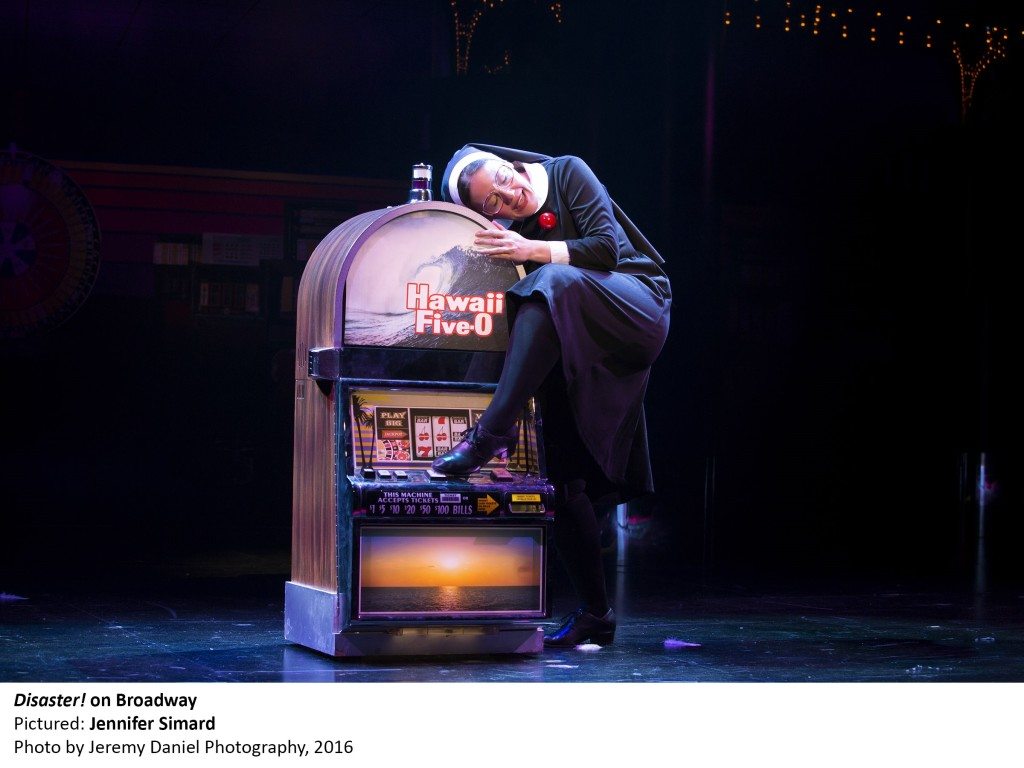 Rudestsky wears a multitude of hats within  the production. In addition to playing Professor Ted Scheider, the voice of reason who warns his shipmates of potential danger, he is also the co-writer, co-creator, and musical director. This, on top of his frequent writing contributions and hosting two Sirius/XM radio shows. I didn’t bother to ask him what he does in his free time; 1 the concept seems foreign to this human form of dynamite.

Fortunately, there haven’t been any real life mishaps during Disaster!, but Simard recalled one of the most unfortunate productions she had ever seen. “It was an Easter pageant at catholic church in my native state of New Hampshire. One of the roman guards was sick, so his understudy went on. The understudy grabbed a real spear instead of a fake one and when the guards plunged the spear into the actor playing Jesus, he yelled, ‘Jesus Christ! I’ve been stabbed!’. In that same production, they wanted to release a beautiful amount of doves from the rafters at the end of the pageant. They doves were kept too close to the lights, so when they released them, tons of dead doves just plopped onto the pews.” 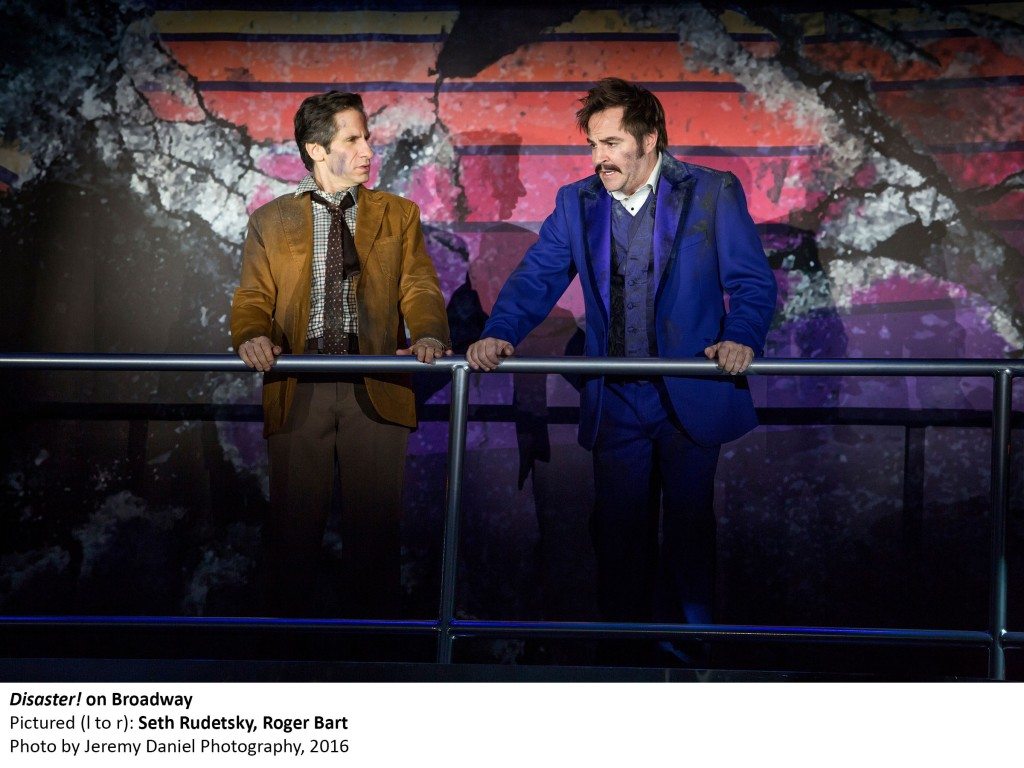 For now, Rudetsky and Simard are soaring like eagles,  winning the hearts of critics and audiences alike. “A woman with MS came to see the show recently and she grabbed me outside after the show,” Simard said. “I just want you to know what I’m going through,” she told me.  “I haven’t laughed this hard in months, and I just want you to know what you do for people, because I really needed this.” It’s a true testament to the power of comedy and Simard wants to make sure that it is never short changed. She ended the interview with a plea: “Please come laugh, you’ll feel better.” As for Rudetsky , who grew up with a fervent passion for theatre, he’s just happy to be here. “The most rewarding thing? Doing a f—in’ Broadway show!” 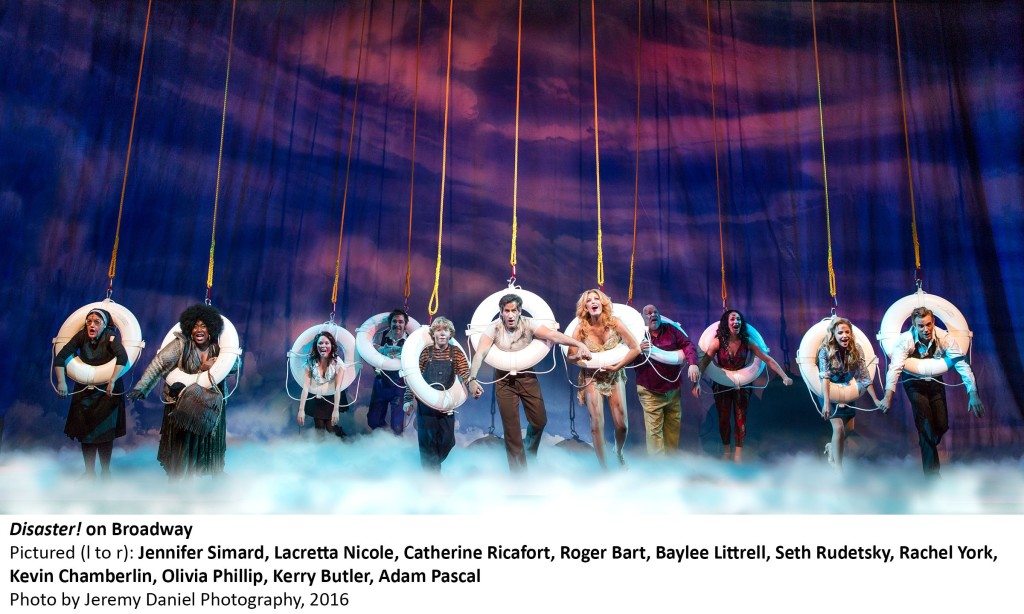 Disaster is now playing at The Nederlander Theatre  (West 41st between Broadway and 8th) through July 3rd. For tickets and info, visit http://www.disastermusical.com/