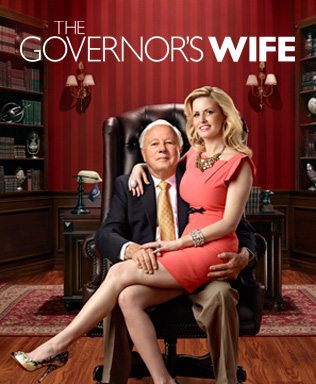 The Governor’s Wife: Sunday at 10 Eastern on A&E

I spend a lot (probably too much) time discussing the notion that many reality TV shows often feel over-scripted, and much of that is the result of many cable reality shows looking to scripted TV as a source of inspiration: The Real Housewives cashed in on the unexpected success of Desperate Housewives, for example. However, there are many times where the borrowing from scripted series’ instead comes in a much subtler form– often by working off of classic tropes or cliches that often fuel a wave of similar shows (such as the dysfunctional family comedies that ruled the roost in the 90’s, or the failed man-pocalypse that led to a number of failed comedies two years ago).

The Governor’s Wife takes the dysfunctional family trope to the extreme. In this, our patriarch and rock of the family is 85 year-old former governor of Louisiana Edwin Edwards (who served a little over 8 years in prison for charges related to political corruption). While in prison, he met his current wife, Trina, a 35 year old blonde bombshell. If the difference in age of our central couple seems wide, it’s even further exaggerated when you meet their respective children as Edwin’s two daughters are in their sixties while Trina’s kids are high school aged. Toss in accusations of gold digging, the desire for another child and the Southern society they are a part of and you have a recipe for some drama.

This show feels painfully scripted (with some very bad line reading during the voice-overs to go with it). While it’s pretty clear that this is the current state of affairs in reality TV, almost everything about The Governor’s Wife seems to be deprived of even the spontaneity that typically comes from one’s reaction to a situation. Trina is particularly plastic in this regard, awkwardly breaking out into tears at the notion of her 85 year old husband eventually dying (one would assume either no tears, or the tears occurring at the initial thought, not saying it with a straight face and then breaking a sentence later).

Unfortunately, the producers’ heavy hand on the show doesn’t actually help the show flow better. There is an overabundance of cut-away shots and voice-overs that almost come off as if you were watching a director’s commentary of a reality show instead of the show itself. Much of this issue derives from a sick obsession with pushing it’s one liners on the audience, as many exchanges on the show follow a flow where the cutaways and voice work is there to either sell or deliver a tepid punch line.

While the show is clearly built to be viewed through Trina’s lens, the generally myopic focus on her makes for an incredibly boring show. Aside from not being the most eloquent person, the truth is Trina’s presence in every storyline often reduces everyone else to a one note caricature. Nowhere is this worse than with Edwin’s younger daughter Victoria, whom with a pale face and strikingly dark makeup resembles the witch that the show makes her out to be (her main argument against Edwin and Trina having a baby involves her inheritance and a seemingly irrational hatred of Trina that’s never explained).

The Final Verdict: I’ve reviewed shows that have made me feel more viscerally bad than The Governor’s Wife. However, the show instead grinds at you with a different sort of badness that comes with being a monotonously boring affair built around the notion that people want a glimpse into the low-conflict life of a minor celebrity’s spouse. Skip this one, you’ll do better by watching basically any other reality show about rich people running around being rich. 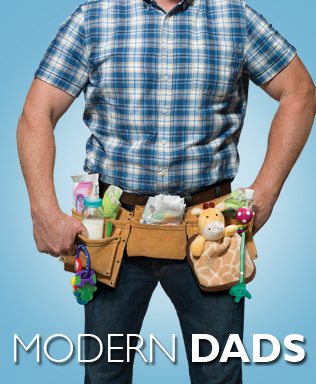 It’s pretty amazing how the reality genre has adopted the hacky comedy premise and made it it’s own. We’ve seen this trend grow in the last few years, with shows such as Here Comes Honey Boo Boo and Duck Dynasty. Even a show like last week’s Owner’s Manual seems to take pages from this new playbook of finding what would seem like a viable sitcom premise from 1980 and finding a way to squeeze it into an unscripted format. It is with this trend in mind that A&E, a network once known for it’s highbrow programming, unleashes its’ newest show, Modern Dads.

Modern Dads follows four stay-at-home dads as they try to balance parenting with their careers and their personal lives. The series introduces us to four leads: new father Nathan, whom tends to exhibit the protectiveness that comes with it, Rick, a more laid back father with the nickname, “the MacGyver of dads”, Sean, a step-dad raising his girlfriends kids, and Stone, a single father.

So, how does Modern Dads turn out? Well I’m not sure whether it’s a case of life truly imitating art or whether the show relies on the same tired tropes we’ve seen (mostly on ABC) over the years. Our first episode alone trots out the tried and (not particularly) true story lines of: The guys want to throw a party and Stone considers a vasectomy.

Unfortunately, Modern Dads also happens to mine all of its’ humor from those same unfunny jokes. Since the vast majority of talking heads are used for laughs (whereas normally they’re used for insight, drama, and to fill in the gaps that the producers missed), what you often see is a fairly laugh-neutral scene which is then cut away to some of the weakest punchlines on cable TV (90 percent of those, by the way, end up being Newlywed Game tame sex jokes).

Worst of all is that this laziness seems to bleed over into the production, we see the same four splashes every time a scene transitions (which wouldn’t be so bad if it didn’t feel like it was happening 15 times in a 22 minute show), with the producers not hesitating to remind you that these men are nothing more than their three word tags. Furthermore, the scenes seem fairly repetitive in nature, so it feels like they are trying to stretch four minutes of material into 22 minutes. Needless to say, it’s debatable that such a vacuous, and empty show should actually make it to the air.

The Final Verdict: If I were to describe Modern Dads in one word, it’s lazy. It’s padded to oblivion, with obviously scripted and unfunny jokes put through cliché driven non-plot lines. Skip this one: if you really want to watch a show about bumbling dads, you’re better off throwing on some reruns of Home Improvement; at the minimum the jokes will feel fresher.

In other news; please feel free to join us here at Manhattan Digest for live coverage of the MTV Video Awards this Sunday Night! 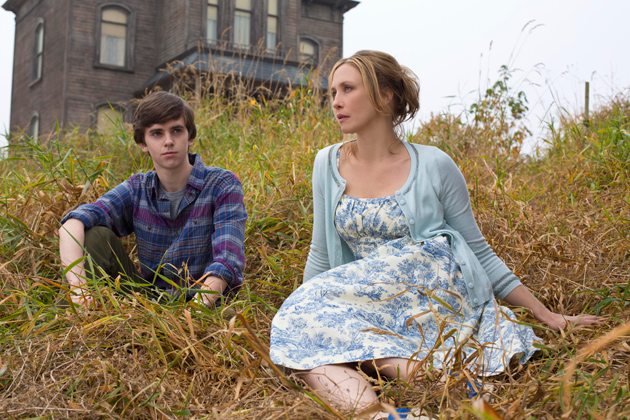 Throughout the history of the horror genre, we’ve seen our fair share of notable villains. From Jigsaw of Saw who simply sees self-mutilation as the means to appreciating one’s life for the better, to the seemingly immortal Michael Myers of Halloween fame to Jason Voorhees at Camp Crystal Lake, we see the end result of years of psychological illness in the form of a machete and some poor misguided co-eds.

However, Bates Motel asks, what turns these people into our most beloved serial killers? It does so by following around iconic slasher Norman Bates during his teenage years in a prequel to the Alfred Hitchcock classic. This means we will get a glimpse into Norman’s family life, as Norman was always horror’s preeminent mama’s boy.

Our first episode revolves around Norman moving to White Pine Bay and getting adjusted into this new location, trying to get a new start six months after the death of his father. Norman is the sort of nice shy boy that girls seem to take to fairly easily, and his teachers want him to get involved in the school’s athletics (particularly the track team). His mother Norma however, is guilt-tripping him at every turn, claiming she needs him at the Motel all the time. This eventually leads to Norman sneaking out of his house to go to study only to end up at a house party.

The second subplot revolves around a man whom returns to the plot Norma bought in order to “take back his property”. While Norman is out at said party, the man returns, trying to rape Norma. Norman walks in at the last second and smashes him over the head with a iron, which leads to Norma killing him soon thereafter before spending a day or two figuring out where to stuff the body and hiding it from the cops (one of the best whimsical moments of the pilot involved the Sheriff giving Norma a puzzled look as to why she named her son after herself).

The main pairing of Norman and his overbearing mother Norma Louise Bates (as played by Freddie Highmore and Vera Farmiga respectively) are both played excellently, particularly Farmiga as Norma Louise Bates, playing the sort of unsettling, unstable, mother that leads a man down the road to insanity. Norman is played as a sweet gawky teenager who hasn’t been completely down the road to ruin. Both however, are played with the sort of subdued nature required to sustain a prequel show like this for multiple seasons, and the development of both of those characters over time will be a key factor to the show’s success.

The writers do an excellent job mixing not only the mundane moments that are necessary at the start of the series to establish character, but also providing tension where it does pop up, whether it’s Norman’s discovery of his father’s death or the very intense rape/murder scene that occurs in the middle of the episode. In spite of that, the show makes it a priority to let these moments breathe, as it’s most truly unsettling parts come from Norma’s reaction to both situations (and some lesser ones such as Norman’s request to join the track team).

The soundtrack to this show also is pretty impressive, following the classic horror soundtrack that one would expect from a series built around one of horror’s most psychotic characters. Soft piano music plays through happier segments, while your standard horror strings move through the tense parts. The visuals are equally impressive, often relying a palette of beiges, and yellows to provide a quaint feeling.

The Final Verdict: Bates Motel is everything that a show like The Following wishes it could be. It’s creepy, it’s unsettling, and it’s most intense moments are frankly uncomfortable enough that it eschews the jump scares. It ultimately feels like one part Smallville, one part Twin Peaks, and one part any twisted family drama you can think of. Check it out, you won’t be disappointed.