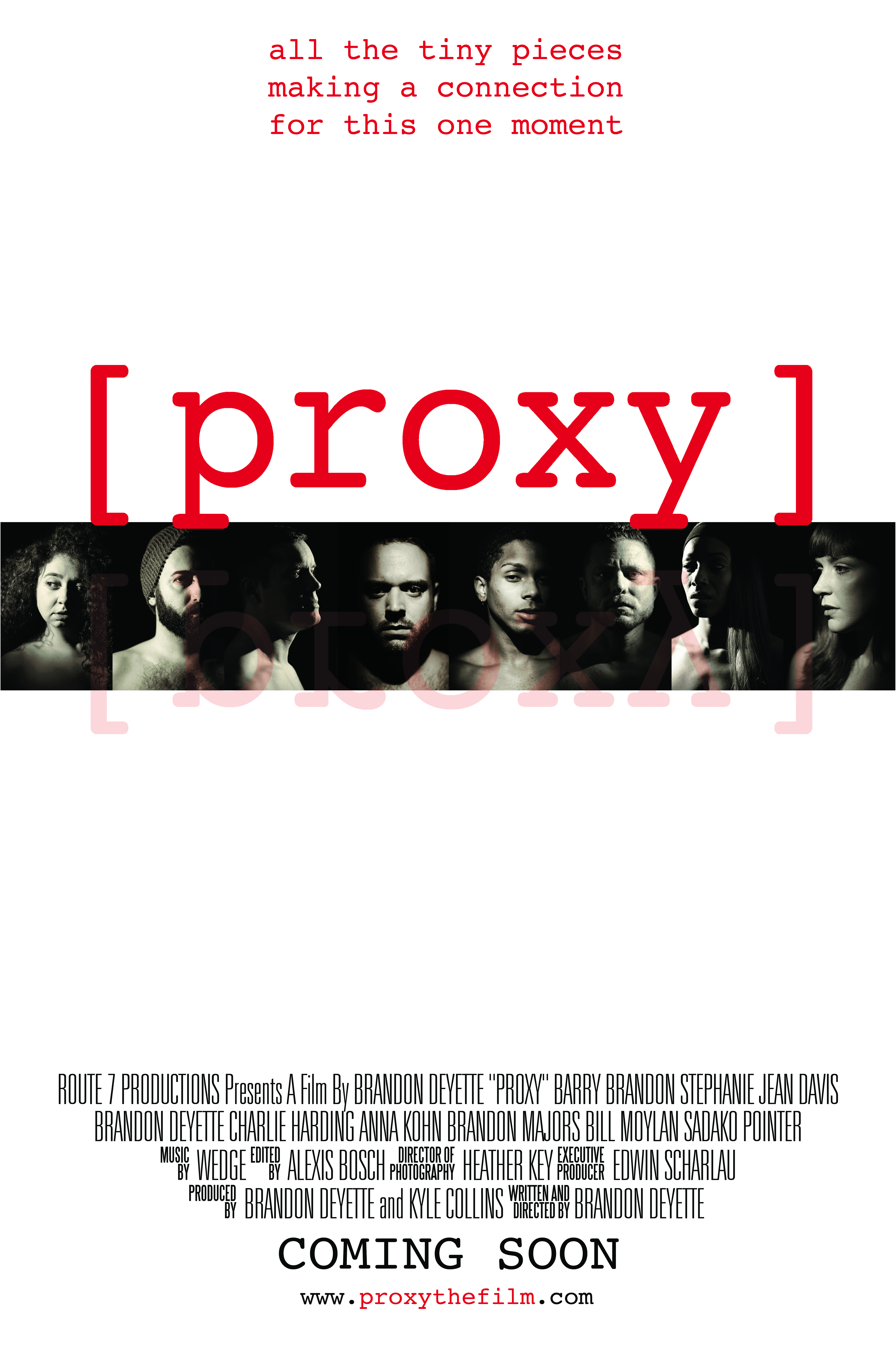 The “everyone is connected” trope isn’t new cinematic territory, but a new indie effort approaches it from a distinctly LGBT perspective, while also spending more time developing a smaller group of characters than earlier films like Nashville (1975), Magnolia (1999), and Crash (2004). Proxy (2015) works best as a series of short one-act plays focusing (mostly) on two characters apiece, cutting back and forth between them until everyone collides in a twist ending that mostly works. The film suffers from melodramatic moments of pretension (chapter breaks, the opening voice-over), but they’re not frequent enough to distract from what is more often than not an engrossing character-driven debut from writer-director Brandon Deyette.

Josh (Deyette) reconnects with his estranged ex-fiancee Tess (Stephanie Jean Davis) to retrieve his engagement ring, but she has a condition for its return. Tristan (adult video star Charlie Harding in his non-explicit film debut) confronts Steve (Barry Brandon) when he reveals he knows a bit more about the trick their friend Price (Brandon Majors) is en route to meet. Kari (Anna Kohn) rushes to connect with her college buddy Becca (Sadako Pointer) after a piece of particularly devastating family news only to find Becca is experiencing a crisis of her own.

At face value, none of these individual tales sounds particularly provocative, but woven together in a narrative tapestry it’s very difficult not to become invested in at least a few of these characters’ trials and tribulations. The film relies on long single takes, shot with a handheld camera, which contributes a sense of intimate urgency to the often dramatically charged dialogue scenes, but during quieter moments can be a jarring distraction. Most importantly, the often uninterrupted takes allow the ensemble cast to come so much more alive in their characters. Not all of the stories are equally effective, however, and much of it depends on the performances and writing. We open with Josh and Tess’ reunion, awkward from the get-go and progressively tense and uncomfortable, aided immeasurably by Deyette and Davis’ very natural performances; they play off each other beautifully. Tess initially seems like a spider luring Josh back into her web of deceit, especially as Josh’s demands for the truth grow more fevered. The pair eventually reach an emotional stand-off that almost levels their playing field, revealing the sensitive nature of both characters and letting an audience develop sympathy for their unique positions. An ambiguous conclusion is mildly frustrating, but then messes like theirs don’t get cleaned up in an hour and change.

The story most likely to get attention from its target festival audience is that of Tristan and Steve, revealed to be exes who’ve remained friends, but tension remains between the two because of Steve’s self-destructive and borderline sociopathic behavior as a gay man living with HIV in New York. Very few films or television shows tackle this topic these days, perhaps out of fatigue over the multitude of media making up the vast majority of gay culture in the 1990s and well into the 2000s. The film never actually uses any of the hot button words to indicate that the conversation is about HIV, which is rather refreshing. It doesn’t need to. The challenging nature of Steve’s character is that he feels zero responsibility for having to share his status with anyone, including his sexual partners; if someone doesn’t ask, it’s that person’s fault if they become infected, a philosophy he imposed on himself after confronting the trick who infected him. This way, his shame can continue to hurt him and those around him. It comes as no surprise then why he’s bitter and unpleasant from his very introduction. Brandon should be given credit for making him such an ultimately tragic figure. Harding has come a long way from MEN.com and does a fine job with his character, and Majors is given an amusing exit speech that makes you wish he’d stuck around longer.

The strongest story for my money is that of Becca and Kari, anchored by two solid turns from Pointer and Kohn, who I hope to see much more of in future projects. It’s not even that the story here is as strong as the other two segments (in fact, it’s arguably the least developed). But both women almost effortlessly develop a chemistry that leads the audience to believe they have been friends for years. These are two women I’d like to spend time with, and more focus on them in the film would have been very welcome. Becca is introduced in a soft-lit afterglow scenario before we see her taking a pregnancy test on the toilet. There’s nothing titillating about it, but I mention both sequences because they indicate a larger sense of striking bravery in Pointer as an actress, embracing her character in two potentially unflattering moments and drawing us into connection with Becca as a flesh-and-blood person. Kari, stuttering out the shattering news that her father is a bigamist, is funny, charming, and sympathetic. She chugs back a swig of Grey Goose, straight, and almost immediately rushes to the bathroom to throw up. Her vomiting does not distract from her from noticing Becca’s pregnancy test on the bathroom sink. Again, here is an actress who’s dedicated to embodying the role, embracing human moments like confronting your best friend about her pregnancy test with fresh puke on your face. Of a uniformly strong cast, Kohn and Pointer emerge as the MVP’s, and their story offers the most vividly felt dramatic moments.

When all is said and done, Proxy isn’t a slam dunk. Certain sequences feel under-cooked and the more subtle moments of character interaction that work splendidly clash with some excessively dramatic sequences. But this is a very promising debut from a writer-director to watch, and certainly one to look for as it circulates around the film festival circuit.