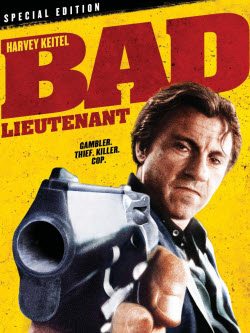 Just when I thought that I might be a long while before I returned to my Netflix’d column (I thought about reviewing the second season of House of Cards, but decided that it would more-or-less be a repeat of my season 1 review), it seems the streaming gods decided to present to me a challenge when they placed Abel Ferrara’s original Bad Lieutenant on the Netflix queue. A challenge I accepted!

As a man who prides himself on making cinema recommendations to people, I also have to keep in mind that there are essentially two different kinds of films that I recommend: Films that are great, and film’s that should be seen for other factors. I feel that Bad Lieutenant fits into the latter category, as it is a flawed film that’s also really ugly and forced. Still, it remains an anomaly to this day for a whole host of factors, and its pedigree has certainly risen since the 2009 release of Werner Herzog’s slight remake, Bad Lieutenant: Port of Call New Orleans. Why is this black sheep of a dirty-cop movie so special? Well, we can start with looking at the plot.

The film stars Harvey Keitel as an unnamed NYPD police lieutenant, and maybe that’s for the better. Keitel’s character is simply abhorrent in a way that makes a Clockwork Orange’s Alex look like Tiny Tim. A heroin using, whoring, and potentially insane man, there really isn’t a redeemable thing about the man…but apparently he does believe in god. This spiritual affliction starts to have an uncanny effect on our bad lieutenant when he takes on a case involving a raped nun, that sends him on some strange sort of redemption spiel.

Director-writer Abel Ferrara has had a particularly strange career, starting out directing pornographic films and grindhouse features soon after he graduated from college. He garnered more of a cult following in the 80s though, when he directed Ms. 45, a schlocky revenge film that some critics called “feminist”, and would actually go on to work with Michael Mann and direct two episodes of Miami Vice. His popularity possibly peaked in 1990 when his directorial effort  King of New York came out, a social-conscious shoot em’ up starring Christopher Walken, that actually lent the late rapper The Notorious B.I.G. his alias of Frank White. Still, after this success Ferrara chose not to pursue a more mainstream path, and instead put out an NC-17 rated film with potentially zero wide-spread appeal. So…can’t call him a sell-out right?

With a budget that was only $1 million, Bad Lieutenant avoids having elaborate set pieces, and almost entirely puts its weight on Harvey Keitel. It’s a brave role for Keitel to have taken the same year that he appeared in Reservoir Dogs and Sister Act, as not only do we see this venerable actor playing an exaggerated low-life, but he actually did full-frontal nudity for the first time here (yes his penis is small and grotesque-looking, and I’m grateful memes didn’t exist when this film came out). Yet once your mind gets off of such things, one can make a case that Keitel’s performance isn’t very good. He’s essentially a cartoon, and his mannerisms get to a point of being repetitive, yet still he entices us. Despite being such a lurid film, Bad Lieutenant manages to come across as humorous too, perhaps suggesting that the only sane reaction to seeing such a film is to laugh. Is it because we know who this actor is and just have never seen him play such a character before, or is it because of Abel Ferrara’s strange direction, and even stranger screenplay? Maybe it’s all of the above?

One intriguing factor is that this would be an entirely different film if now for the religious symbolism. The film’s references to religion and Christian re-birth are about as subtle as a jackhammer to the face (Ferrara isn’t exactly Martin Scorsese), but the Catholic guilt in the film definitely gives the film an oddity factor. One particular scene that involves Keitel raving and ranting to an image (hallucination?) of Jesus Christ probably remains the most memorable mark of Abel Ferrara’s film making career and it isn’t necessarily well done. Keitel’s acting is over-the-top, and the judeo-christian imagery of it all just feels like Ferrara is taking the easy way out for telling a story about redemption. Still, it’s an endlessly watchable scene, that acts as something of a surreal and exaggerated reminder of what people have come to expect from these gritty, cop-based films.

It’s rather difficult to tell whether Bad Lieutenant is an art house film that thinks it’s a exploitation piece or rather the other way around, but it remains a curio of the American 90s indie-boom, and it hasn’t been affected by age. It still gives off the same reactions of disgust, puzzlement, intrigue, and hilarity that it did when it was released 22 years ago, and it’s likely to go down as Abel Ferrara’s most remembered film. I can’t promise that you’ll like it, but I can promise you that it must be seen to be believed.