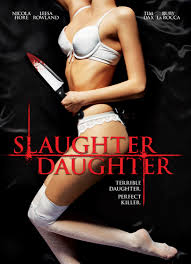 Those who know Troma need no further introduction, but for the uninitiated, Troma is the demon child of Lloyd Kaufman, conceived of a tradition of a low budget horror production grandfathered by the likes of Roger Corman and Herschell Gordon Lewis, but bastardized into something beyond B-Grade (or even F-Grade). It found its ultimate recognition in the form of a famous cult figure known as Toxie, from a series known as Toxic Avenger. If films are meals with Hollywood being fast food and a good European art film a type of fine dining, Troma is discarded balut found outside a leaking radioactive waste facility.

Those in the know are aware that none of the above is negative criticism of what Troma is or represents. Kaufman is keeping to a method of branded and consistent cult no-budget filmmaking that has maintained a culture of its own. Those whose knowledge of cult cinema terminates at Sam Raimi’s Evil Dead films may find themselves horrified and sickened by the production value alone, but for those who love to bathe in abject excess from the fringes of festering film, Troma is iconic. Though Slaughter Daughter is not a Troma release, it and distributor Brain Damage fit firmly within this genealogy, and the production talent keeps it in the nuclear family. Slaughter Daughter is everything hysterical, madcap, and shrill, all of which lends itself an abject, magnetic energy. For fans, this energy is exciting, though some audiences may be forgiven for finding it exhausting.

Vamp actress Nicola Fiore plays Farrah, the titular daughter of Rowland’s Phyllis. After being stood up at her wedding, Farrah suffers a breakdown and goes into self-imposed isolation. She becomes fascinated by a serial killer named Jackson Miles, and she follows his movements with literally orgasmic passion until Phyllis’ engagement with the snobbish Willard Neff awakens Farrah’s inner monster.

Tim Dax plays Jackson Miles, one part machismo-drenched prison brat and two parts hallucinogenic fairy tale godmother. Dax (whose tattoos such as a luchadore mask-like helmet design are part of his personal style and not makeup from the production) does actually pull off a strange guiding warmth to Fiore’s intensity, counterpointing Rowland’s performance as the self-involved and disingenuous Phyllis. Within the insanity of the movie contains an actual underlying logic of the relationships, as the abandoned and dismissed Farrah seeks a lover, a father, and a friend, all of which only she can consummate on her own terms after she’s failed to find it from her family (father is dead, brother is impotent, step-father’s a douche, you get the drill). She weasels her way into meeting Miles in person and the two, ah, execute a plan focused on Phyllis’ rooftop wedding.

And from there… well the movie is called Slaughter Daughter. You know what this is. The rest is the falling action as a roller coaster ride complete with a cameo by Lloyd Kaufman emceeing as the minister of the wedding.

The final cut of Slaughter Daughter was recently shown at The Producer’s Club, hosted by Campbell and Rowland in person. The movie has taken a long journey from its production. Shot in 2012, it won best feature film at Orlando’s 7th Annual Freak Show Film Festival that year, but various sound issues compelled Campbell to clean it up before Brain Damage’s release.

As far as the quality of the final cut is concerned, it looks and sounds great considering the context. Campbell has managed to keep a look of washed-out color of cheap film bathed in sickening pale light cast through green, red, and yellow gels, while updating it to digital by adding a bit of glitch art to fragment the frames. Whereas it ain’t Luis Bunuel, it still achieves more psycho-seductive charge on a lower budget than something like Black Swan. You just have to let the glurge wash over you and accept it for what it is.