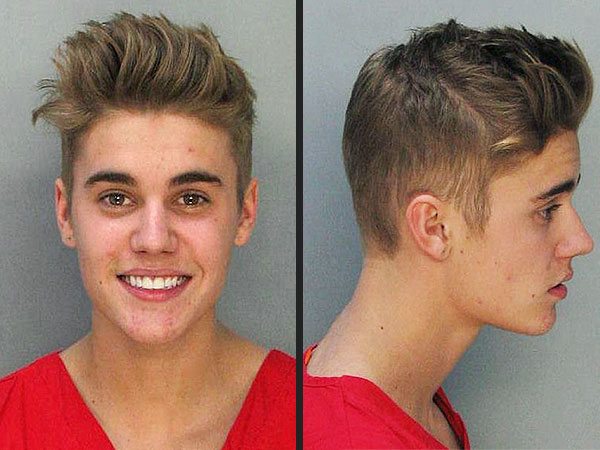 Let’s be honest…it’s hard to feel sorry for Justin Bieber. At just nineteen years old, the kid is a multimillionaire with a collection of hit records, fast cars, and even faster girls who probably weren’t even born until the late 90’s. Plucked from the abyss of Youtube and cast into superstardom at only fourteen years old, it seems that “the Biebs” never had to work a real day in his life.

While I worked making minimum wage as a hostess at a chain restaurant, and as a bagger at a grocery store, Justin Bieber spent his high school years traveling on private jets, touring the world, and attending a surplus of award shows. So after months of reading about his questionable behavior, including peeing in a janitor’s bucket, badmouthing President Clinton, and allegedly throwing eggs at a neighbor’s home, I may have shaken my head and rolled my eyes just a little bit when the news broke early Thursday morning of Bieber’s DUI, speeding, and subsequent arrest in Miami. According to the Miami Beach Police Department, Bieber admitted to smoking marijuana and having a beer earlier in the day, as well as using prescription anti-depressants. He was pulled over while speeding in a rented Lamborghini, which he may have been using to drag race at the time. It seems difficult to understand why it is that he would risk wasting all that he has by doing such asinine things.

But after thinking to myself just how unsurprised I actually was by the situation, I began emoting a feeling toward the Biebs that I myself couldn’t even “Believe” (see what I did there?). I began feeling sorry for him.

When I was a nineteen-year-old college student, I may or may not have done a lot of stupid things (Sorry Mom!). But the worst of my public ridicule came from the occasional posted Facebook picture.

At an age where curiosity, growth, and exploration go together like Justin Bieber, pop music, and a thousand screaming thirteen year old girls, its damn near impossible not to make mistakes. After all, this is how kids grow. However, the difference between Bieber and myself, is that I had routine, normalcy, a limited bank account, the support of family and genuine friends who chose to be around me for the sake of guiding me and loving me (not for my checkbook or for their fifteen minutes). I also had parents who would kick my butt into shape when I messed up. I wasn’t constantly praised and given things that I didn’t necessarily deserve. I was informed when I was wrong.

My time was spent with people my own age, and I didn’t have men and women thrice my age on my bankroll. The worst thing I had to worry about at nineteen was whether I failed an exam or if the guy across the dorm hall liked me. I didn’t have grown men depending upon my success to feed their families. And I certainly didn’t have the pressure to be perfect. Any pressure I felt to portray a certain image came solely from myself.

It’s easy enough to judge Bieber, but could it be possible that he was set up to fail all along? After all, this pattern of behavior and the accompanying destruction of child stars is nothing new. Justin Bieber is certainly not the first former child star to undertake a path of ruin, and unfortunately will not be the last. From Drew Barrymore to Lindsay Lohan to Leif Garrett, it seems all but uncommon for child stars — given more freedom, fame, and money than they know what to do with — to act out and self-destruct. The important thing that allows us to learn from our mistakes is the fact that we are forced to fix what we have done wrong – to clean up our own mess. But when we allow others, from the time that they are young, to act out without consequences they often learn no boundaries or lessons and continue on a path of entitlement and disregard for others.

This is not to say that Bieber shouldn’t be held accountable for his own behavior. He is old enough to know better and he should face the consequences of his actions. But the excess that child stars are given, combined with the pressure to fit a certain mold before they even know who they are, is a timeless recipe for disaster; expecting anything else from such a situation would be naïve. It takes an extremely grounded kid with a strong support system to bypass all that comes with being a child star. But Justin Bieber is no longer a child. And therefore should no longer be treated as such. His behavior can no longer be explained away as growing pains or a product of being young.

I can only hope that Beiber’s longtime manager, Scooter Braun, shares the idea of a little tough love. He took to Twitter early Friday morning to comment on the arrest:

“@justinbeiber love you and I will act in the manner of someone who truly cares. That is all I have to say. Thanks for all those concerned. Been a long day. Bottom line is we are defined by how we handle adversity. Be there when it counts. Love fully in good times and bad.”

Hopefully this incident was an eye opener for Bieber’s team. Unfortunately it appears that Bieber has failed to learn from his recent mistakes, gallivanting about Miami with his father, and comparing a picture of himself after being released from prison to a picture of Michael Jackson after his arraignment for child molestation charges in 2004 by posting the photos side by side on his Instagram account.

On Friday Bieber opened up about his arrest for the first time, tweeting:

While it’s clear that child stars seem destined to implode, unfortunately I don’t have a solution. Kids are one of the hottest commodities in Hollywood. The harsh truth is that there will be thousands more Justin Beibers to come. But as a society I suggest that we examine where some of this disappointment really belongs: on the adults in these celebrities’ lives who care more about their “product’s” image and their wallets than that child’s personal well-being. They, along with his family, should be the ones teaching him what is and is not acceptable. But regardless of their failed responsibility to raise Bieber to do the right thing, Bieber needs to grow up and learn to be the role model he undoubtedly is for many kids the world over. Let’s hope that an impressionable young generation, searching for someone to emulate has elsewhere to look.