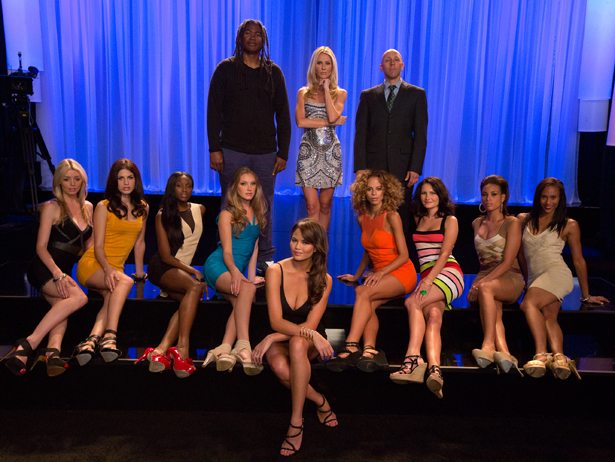 I’m generally not the biggest fan of the reality genre, but I have an admitted soft spot for the “fake out” style reality show first put on the airwaves by Joe Millionaire, and ultimately perfected by reality parody The Joe Schmo Show. It’s also a side of the genre we tend to see less of than your more straight-forward Real Worlds, Real Housewives, and Big Brothers. VH1 returns to this well tonight with Model Offering, a modeling competition that is decidedly not cut from the America’s Next Top Model cloth.

Model Employee is designed to be a modeling competition unlike any other. It puts eight models all vying for a job being the face of Las Vegas’s Mandalay Bay hotel and casino in a competition that doesn’t just focus on the glamorous side of modeling, but also forces them to handle the dirty work that comes with being part of a large entertainment resort empire.

Our show opens with a Robin Leach knockoff narrating the premise of the show and introducing our eight very catty contestants (all of whom have major names on their resumes). After getting to know each other, the show finally springs its’ conceit on its’ contestants, courtesy of host Chrissy Teigen. Needless to say, our contestants were not pleased having to bus a large banquet and then wash the dishes. After this first task, our models are introduced to their penthouse, which is more of what they are accustomed to.

The next morning they wake up to enter the deliberation room, where they meet their judges…whom were all undercover the night before: Vanessa Branch (of Orbit Gum commercial fame), Jimmy Smith (a marketing executive), and Patrick Miller (whom is the VP for entertainment at the Mandalay Bay). While everyone was spared elimination, we find out that the winners get to work as spokesmodels at a wine tasting event while the bottom four work as harnessed servers known as the “wine angels”. Things are bumpy for both the angels and the spokesmodels at this event as the servers try to get an education in grabbing wine bottles in midair while the models get grilled about basic product information (and with the exception of Alexis fail horribly at it).

There’s a certain schadenfreude that many get when it comes to watching our most privileged stumble, and luckily our models are generally so arrogant that it’s fun to watch them struggle with basic tasks that most people could perform easily. Additionally, while there is a ton of cattiness amid the models, the initial twist of sending the judges undercover for the first challenge was an amazing way to see if they could get our contestants to say something really stupid while no one was watching (even though Chrissy foreshadowed the twist at the outset). Needless to say, they succeeded with Johanna saying some things that if put on twitter would bring down an empire.

If there is one real knock I have about the show, it’s that it visually looks cheap in a show that has a naturally opulent setting. This is really apparent in the opening, the confessional room (a green screen with a cheaply done generic screen effect…the casino is opulent, could you have not done what Bravo does for every show and show off your setting?), and the deliberation room which looks closer to a cheap game show set than a model runway. This also feels apparent in the way it was shot, aiming for cheap time lapse effects and sped up tracking shots that fail to do the Vegas skyline justice.

The Final Verdict: Everything about Model Employee screams guilty pleasure. The producers have done an excellent job putting together a sufficiently catty show that is more about upending privilege than celebrating it. The show is strongly cast and places the focus on our contestants’ inability to adjust to “normalcy” from which the drama then spokes out naturally. The end result is a funny reality series that should remind people that taking casting calls for reality series that promise luxury is quite possibly the most misguided thing you can do. Check it out if you’re into this sort of stuff, it’s not a bad way to spend 60 minutes.