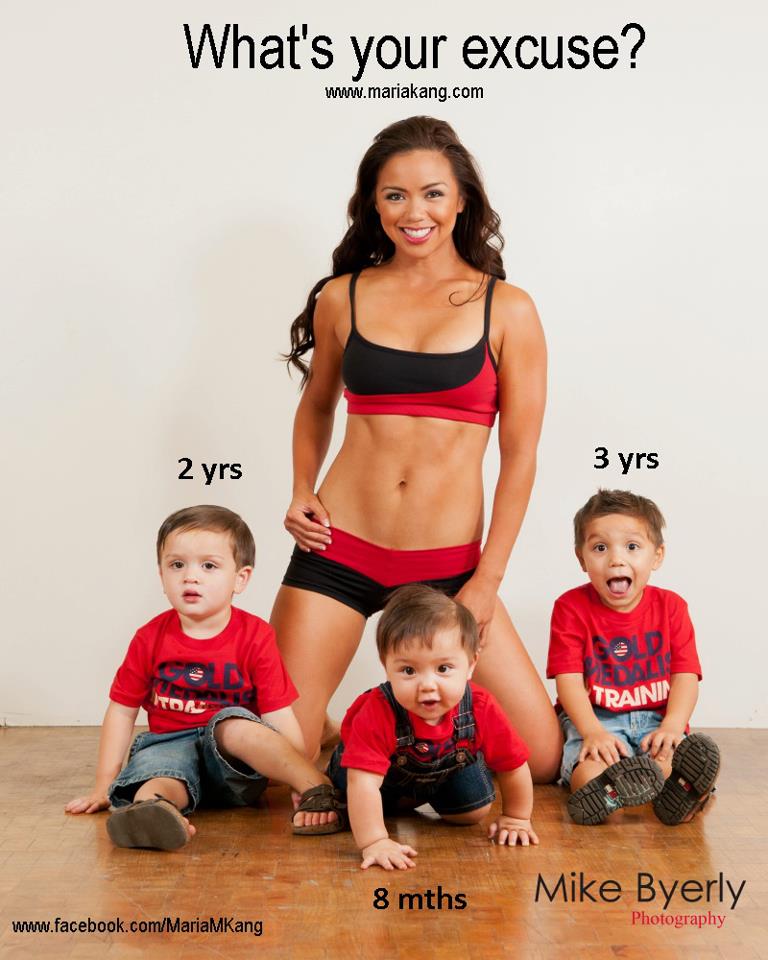 Maria Kang, a California mother of three, who came to be known as “Fit Mom” for her no nonsense approach to health and fitness is once again caught in the crosshairs of an ongoing public uproar.

Kang was the recipient of harsh criticism after an image that she posted to her Facebook page last year recently went viral. The picture of Kang, clad only in a sports bra and mini fitness shorts, and surrounded by her three young sons (aged three and under), features the question “What’s your excuse?”

The controversy surrounding Kang was reignited once again on November 22, when she responded to a photo campaign launched by Curvy Girl Lingerie, in which larger women are seen in their bras and underwear.

“1. We have a health issue in America with over 2/3 overweight or obese.

2. We have a healthcare crisis. We spend over 3 trillion in healthcare yearly!

3. We have a childhood obesity issue, with many children suffering from adult diseases like diabetes.

4. We have magazines everywhere praising the celebrity (with all her resources) for being fit after months of giving birth and scorn the “real every day mom” who is able to be successful.

5. We keep blaming the culprit (school lunches, fast food, etc) when the real change starts at home – ESP those who lead, which are the parents.

There are some serious contradictions in our society. I know many people still get riled up with me and my convictions but the truth is I KNOW how it is to work your ass off and not have energy at the end of your day. I know how it feels to be overweight and not drop an ounce after years of disordered eating. I know how difficult it is to raise multiple children – all born a year apart – and make my fitness and nutrition a priority. Lastly, I know how it feels like to grow up with an unhealthy mother wondering if she will live to see your wedding day.”

Kang was surprised by Facebook’s reaction, saying “I was pretty shocked. I definitely think my freedom of speech was removed.”

As a former bulimic, Kang says that she did not intend to fat-shame overweight women, but impressed upon the fact that being obese is unhealthy and should not be celebrated.

“It’s never my intention to say someone should look a certain way,” she said. “But I am not going to stand here and say being obese is okay and we should accept that as the norm.”

While I don’t necessarily agree with the manner in which Kang went about stating her opinion, it cannot be denied that she surely has a point, and that she has gotten us talking about health and weight in this country — a discussion that despite an incredulous amount of diet supplements and focus on body image, has been long overdue.

It cannot be denied, as Kang says, that the money spent on poor health and its effects in this country are astronomical; the cost of being obese trickles down to almost every aspect of life. From the families of those affected, to the cost of healthcare, to the toll that poor self-esteem and depression can take, obesity has undoubtedly become an epidemic. It has also been scientifically proven that a healthy diet and exercise are the cure for most health issues and diseases associated with obesity. Furthermore, it cannot be denied that said healthy eating habits and exercise are the product of hard work, dedication, and sometimes will power (okay…always will power). These facts we know. So what exactly are we so angry about?

Sure it can easily be interpreted that Kang comes across as preachy, holier than thou, and in some respects even abrasive. Her “What’s your excuse?” mentality tends to pin those without abs against those with a hefty six pack. It can easily put those of us with cellulite on the defensive.

I understand, because the truth of the matter is that even at my fittest, I do not look like Maria Kang. I do not have a six pack, or a mere 18% body fat for that matter. However, hating Kang, or citing her for “hate speech” is not only outlandish and inappropriate (not to mention in my opinion highly unconstitutional), but it defeats what I believe to be Kang’s true message, which appears to be getting lost among the ridiculous hubbub.

I believe that in an age where we are so inundated with ideas, it is hard to get others to listen to what’s being said short of shock and awe. So instead of hating on Kang for the way that she looks, let’s break down what it is that she is trying to say, rather than how she is saying it. It may just prove helpful.

2. Being healthy means a healthy diet and exercise.

This is not to say that Kang thinks that we should all look like her clones. Just that we should strive to lead healthy lives instead of making excuses for our inaction. If you are obese there is no doubt that you are beautiful. You should hold your head up high and love yourself with every fiber of your being. And if you don’t, I implore you to start. In fact I demand that you do.

But as humans we are constantly evolving. That’s why each and every one of us should be able to look at ourselves and improve upon where we are. If we slack off in class and earn a D, should we not still strive for an A? We may come up short again, but what kind of life would we be living if we stopped trying all together?

Though I don’t agree with Kang’s approach, I agree with what it is that she is trying to say. And if you still don’t want to exercise or make Popeye proud, that’s your prerogative. I am certainly not in any position to tell you what to do. And if you don’t like what Kang has to say, you can take it with a grain of salt (atop of fries), or leave it altogether. But she is certainly entitled to voice her opinion.