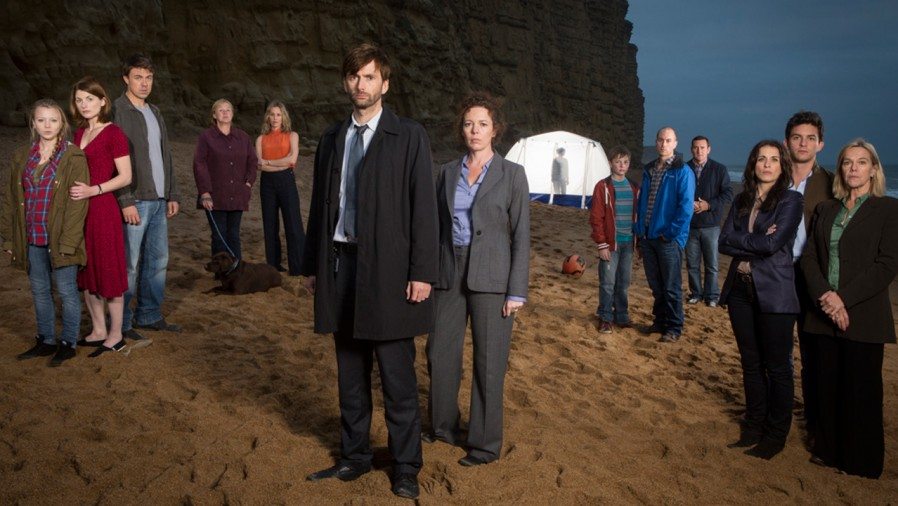 One of the perks of sharing a common heritage and common language with Great Britain is that there always seems to be a great amount of cultural exchange coming across the pond. We’ve seen it with music in the past (ever hear of a little band called The Beatles?), but recently we’ve seen it more and more with television. In the last decade we’ve seen a number of breakout hits come from Britain, including The Office (and it’s longer running US adaptation), Downton Abbey, and an explosion in popularity for Doctor Who. Tonight marks the debut of another British show that looks to capture the eye of America (Fox has already greenlit an American version for 2014-15) in Broadchurch.

Broadchurch is a mystery series along the lines of Twin Peaks or The Killing, in that the entire season is devoted to the investigation of one overarching case as opposed to the case-of-the-week model that CBS has made its’ bread-and-butter for the last decade. Following the case are Ellie Miller (Olivia Colman) and Alec Hardy (David Tennant), whom not only have to deal with the technical aspect of finding a young boy’s killer, but doing so in a way that keeps an interfering media away.

The first thing you’ll notice with Broadchurch is that the camera work is visually stunning, filled with long tracking shots that convey a sense of busyness and an almost cinematic quality to them. This aspect is only aided by the scenery, as most of the show takes place on a beach set beside a cliff and a quaint seaside village not unlike what you’d expect to see out on the east end of Long Island. The scoring is similarly strong, giving off the eerie vibe that sets the mood for a mystery.

Another strength of the show is the dynamic between its’ leads. There are numerous ways that shows of this ilk tend to differentiate their characters: by the book vs. loose cannon being a classic example, but this is the first time that the dynamic could be described as emotional insider vs. cold and aloof outsider. Of course, the writers also manage to find new twists in which to create difficulties within this partnership as Alec was given a job essentially promised to Ellie, while Ellie’s nephew is responsible for the journalistic tsunami that is about to descend on Broadchurch.

The show is also particularly well acted, with a strong commitment to subtlety. Olivia Colman does a superb job portraying Ellie Miller, whose life goes from normal to upside-down in a matter of minutes between getting jettisoned for her promotion and the death of her son’s best friend, however, this is never overplayed, as Ellie looks like she has keeping it together just enough to trudge on with the investigation while still credibly maintaining the possibility that her emotions can compromise the investigation. Similarly, David Tennant does an equally strong job ensuring that Alec Hardy does not turn into the caricature of the more bureaucratically oriented cop while allowing for the stark differences between himself and Ellie to come forward.

The Final Verdict: 44 minutes in and it’s no surprise that Fox jumped at the opportunity to adapt this show. Visually beautiful, subtly acted, and well written, Broadchurch is the sort of show that The Killing has tried to be for the past three seasons. Debuting in the United States at the quietest time of the TV calendar, I strongly recommend watching it, as it seems to be the sort of captivating high concept crime drama that is otherwise absent on this side of the pond.